The Tiki Room is sponsored by Dole. The upside of this is that there’s this Dole booth and you can get pinapple spears (my favorite–long chunks of pineapple) and the infamous Pinapple Whip. I’m about to be blasphemous when I say that I’m just not bowled over by the Pineapple Whip. It’s like ice cream but it’s not ice cream–actually it’s a bit more like frozen yogurt. But you can get said Whip outside of the Tiki Room.

If you’re in the mood for Pineapple whip and have 15 minutes or so to kill, and don’t want to wait in the regular line, you can get inside the Tiki room waiting area and there’s the other side of the Dole booth there where you can order what you want without waiting. 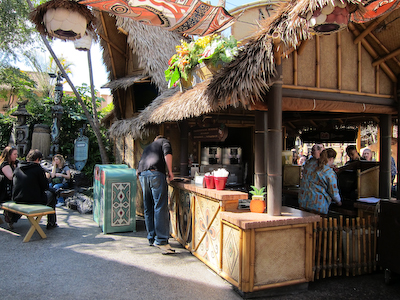 This is the other side of the Dole booth, in case you have an insatiable craving for Pineapple Whip and happen to be waiting for the Tiki Room

I will admit that due to some stress reasons (read: toddler meltdown) I did not actually get a picture of the outside of the Tiki Room. Oops. I’ll slip one in later, okay?

Upon entry, you actually sit in a courtyard waiting for your turn to go into the theater. 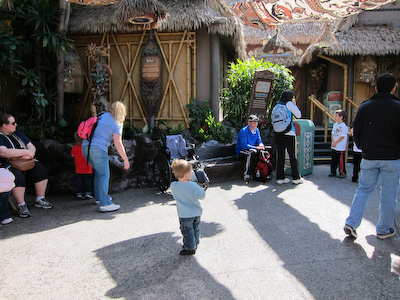 Theo (blue shirt, middle) is pretty much convinced that his mother has left him. What kind of mother does that???

The cute thing about the Tiki Room waiting area is that there are statues around that animate themselves periodically. They are supposed to represent gods or goddesses of one thing or another, though it’s not always clear what they’re talking about.

Pele, the goddess of fire and volcanoes. Also soccer.

Finally, the doors to the theater open. Apparently Walt envisioned this being a dinner theater show. He must have been on crack or something because seriously, you couldn’t fit more than 10-12 tables in this room.

When the doors open, step inside.

We got seated and Theo became immediately upset. He’s not a fan of the dark, and while the room itself wasn’t terribly dark, compared to the sun outside it was. Also, I dressed him in a long-sleeved shirt and it turned out to be kind of hot, so he wasn’t particularly thrilled with that either.

First of all, there’s a bit centerpiece of flowers and stuff. 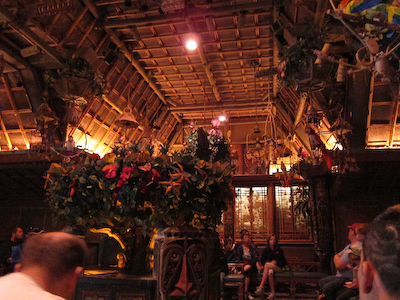 Then the birds wake up. There are four main birds, one for each branch of the audience, which is sort of a cross shape. Also, there’s no flash photography, so these pictures are going to be totally awesome. 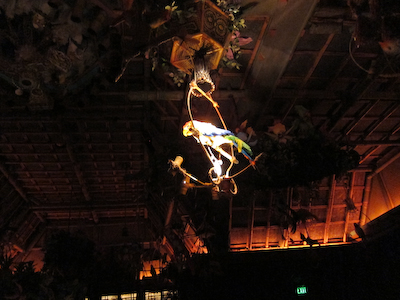 The birds light up and speak. Photography is limited.

Once the individual birds do their comedy spiel, other birds jump in and they all sing their signature song. I think the Tiki Room song is probably the 3rd most recognizable song at Disneyland. Numbers 1 and 2 being Small World and It’s A Pirate’s Life For Me, respectively. 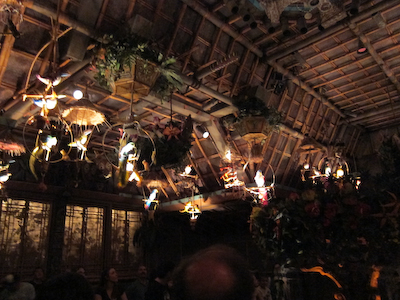 All the birds sing words... 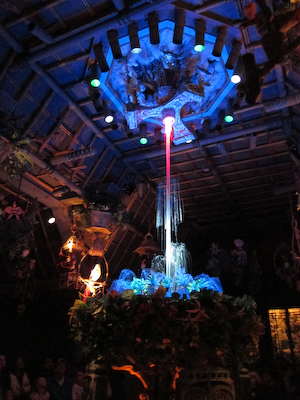 Can't you just hear the choir of angels?

Theo was particularly fascinated by this part. 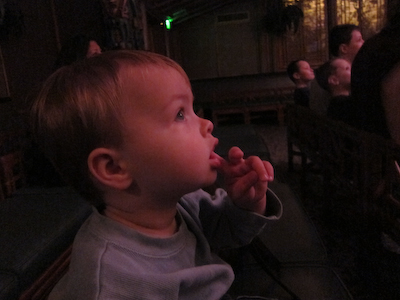 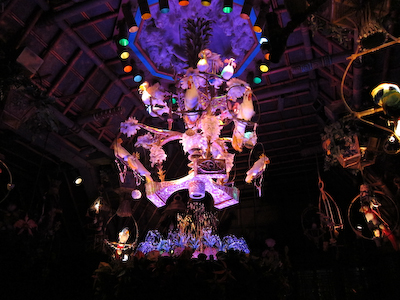 The audience is invited to sing along. Some of us are more enthusiastic than others.

At one point, it starts to “rain” outside and there’s thunder and lightning, and for some reason this naturally leads into the columns in the room bursting out into song.

Their eyes move too. It's a little bit creepy.

Also, at some point, the flowers sing. Or should I say croon? These are kind of like a hyped-up wedding centerpiece on crack. If wedding centerpieces were animatronic or something. These flowers actually remind me of Little Shop of Horrors (bop she-bop), so I always feel a bit uneasy wondering if they are going to eat me.

The Tiki Room show takes aobut 10-13 minutes and is quite cute. It’s air-conditioned, so if you’re looking for a place to rest your feet and also hear singing flowers at the same time, the Tiki Room is the perfect attraction for you.

Adventureland Adventureland, MYWTM, the Enchanted Tiki Room
← More About Character Pictures at the Mouse-In-Law The North(ish) Side of Frontierland →