Everyone else is on holiday break, right? MYWTM is taking a few days off before the new year (or as Theo calls it, the “new ears”). Enjoy some classic MYWTM entries!

The Emporium is the largest store in Disneyland and is strategically located at the entrance of Main Street from Town Square. I say strategic because it’s the first big store when you walk into the park and the last big store walking out of the park. It’s also on a corner. I mean basically if you don’t see the Emporium it’s because you’re blind. And actually, I’m pretty sure blind people run into it as well.

There it is, hidden away where nobody can find it

Incidentally, the Emporium was the scene of my Awkward Social Situation. If you want to see what the Emporium looks like with a big green wall around it, check out this post.

The Emporium is sort of the Wal-Mart of Disneyland–you can find just about everything there.

Clearly clothes are a biggie. In general, Disneyland clothes fall into three categories:

2) Things You Wear On The Lower Half Of Your Body When You’re Laying Around The House Eating Ice Cream (roughly 0.5%)

Disneyland really shoots for comfort. Also I didn’t include hats because they’re probably going to be their own post. Actually you could probably do an entire blog on Disneyland hats, but that would be even more boring than this post and nobody wants that.

Things To Drink Out Of 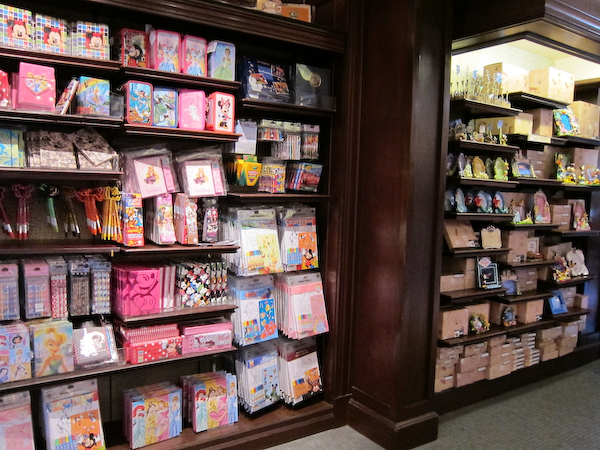 Things Made Out Of Paper

If you want to go around collecting character autographs, here’s a good place to buy yourself a book.  OMG, I just realized that’s something I’ve never done–now I’m going to have to buy an autograph book and stalk the characters.

At the center of the store, the checkout counter has a jumbo-sized snow globe, sans snow. 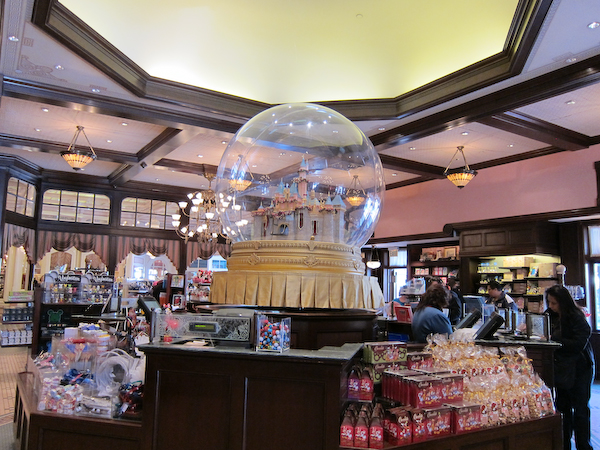 And remember my Awkward Social Situation? It was all to get this picture of shot glasses (with extra cast members thrown in for added authenticity): 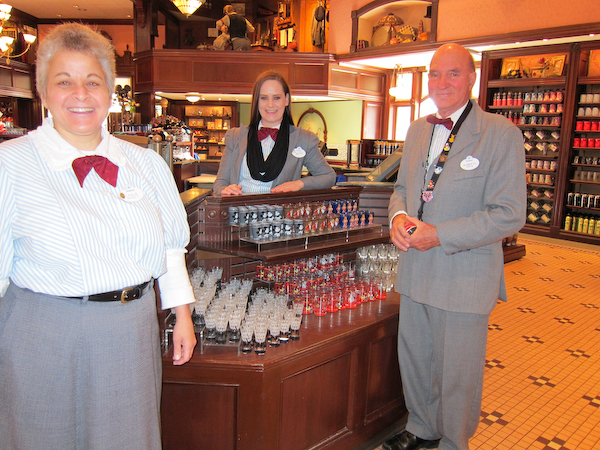 I’d like a shot of Mickey, straight up, yo

And here’s the most anticlimactic thing in the history of MYWTM (which isn’t very long, but still). Walt wasn’t a fan of alcohol, so rather than labeling these as shot glasses, they rang up as “toothpick holders.”

Yes, I got into a massively Awkward Social Situation just so I could tell you that shot glasses were known as toothpick holders.

I told you it was anticlimactic. 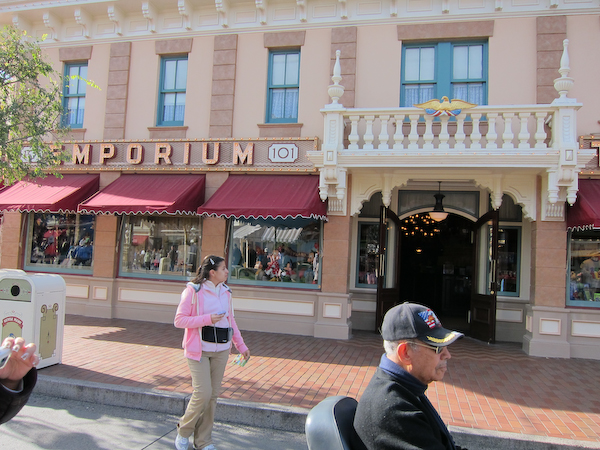 Oh, hello Main Street! I may look like any old store, but if you turn the corner, I’m a monstrosity

Also, there is a line of stores and such that span part of Main Street that are connected inside. The Emporium is the end of that line. It can be a good thing to keep in mind if you’re trying to navigate around 134,132,542,653 people waiting for the parade. I don’t always recommend cutting through stores, especially with a stroller, but if you’re on your own and you’ve got somewhere to be, well…

The last thing you need to know about the Emporium is that it seems like it would be a great place to pick up that gift on the way out of the store. That way you won’t have to carry it with you all day and risk getting it stolen, right? So you think you’ll just swing by on your way out.

Merry Christmas to all of my loyal readers! And a Merry every other holiday that people observe!

I just want to take the opportunity to thank each and every one of you for reading MYWTM, for subscribing and following on Facebook, for the enormous amount of wonderful support, for meeting up with me at the park, and for teaching ME things I never knew before starting this project. I honestly thought, when I started MYWTM, that I’d have a good time at the park and get a handful of readers to follow my adventure. I didn’t expect the number of people who love MYWTM and check in regularly for new posts and ask me to keep them coming! I’ve had so much fun with MYWTM and I hope you have too!

Three years ago today, the love of our lives, Theodore Ainslee Hogan, came into this world.

This is what happens when you’re born on Christmas Eve:

Happy Birthday Theo! We love you so much!

Shelby’s Favorite Christmas Songs: This One Goes Out To The Ones I Love

Holidays songs, that is!

I know I’ve spent a lot of time talking about the songs I hate. Well, you’re probably wondering what songs I actually LOVE. Or maybe you’re not wondering, but I’m going to tell you anyway.

I really can’t number these in order, except for my top two, so I’m just going to give you all 10!

Theo’s Favorite: Linus and Lucy (aka The Snoopy Song)

This song rocks all the way around. The whole A Charlie Brown Christmas album rocks too, but this song is just the best. We are big Snoopy fans over here, not in small part because our pups are beagles and so is Snoopy. And actually Theo’s bedroom is decorated in Snoopy. Which is so weird since Snoopy is the mascot of Knott’s Berry Farm and this is a Disney blog, but…deal. We are such Snoopy fans and fans of this song that at our wedding, we had our friend escort our beagle, Scout, to us so we could use this song as the recessional for our ceremony!

I have completely fallen in love with a cartoon on the Disney channel called Phineas and Ferb. It’s about two stepbrothers (Phineas and Ferb, strangely enough), who spend every day of their summer vacation building these amazing things (rollercoaster across the city, rocket ship to the moon, time machine) and go on adventures. The B plot surrounds their pet platypus, Perry, who unbeknownst to them is actually a secret agent battling the goofy evil scientist Dr. Doofenshmirtz. Okay, I’ve gone on long enough except to say that there is a lot of humor for the adults, and none of the characters are mean to each other. Even the bully is still their friend. Anyway, they have an awesome Christmas episode and this song runs over the final credits. The tune is so catchy!

Departing from the kid music, I love Sarah McLachlan’s holiday album, Wintersong. I particularly like her version of this song. It’s not actually about Christmas, but it’s awesome.

The Christians and the Pagans (Dar Williams)

Okay, this one will tickle your funny bone while it leaves your toes tapping. What happens when a pagan niece decides to stop by her Christian uncle’s house on Christmas Eve? Here ya go.

Christmas isn’t Christmas without the Nutcracker Suite. Most versions are good, so I picked one at random for you. You’ll have to turn up your volume:

Carol of the Bells

At heart, I’m a traditionalist. I particularly love orchestras and choirs. I think this one is a great song for a choir. For this one, we’re going with the Boston Pops Orchestra:

And while we’re hanging out with the Boston Pops, how can I leave out Sleigh Ride??? This version of Sleigh Ride will forever in my mind be the gold standard and true classic.

For Unto Us a Child is Born (Handel: Messiah)

Man, I love these choirs. This is the London Symphony Orchestra.

This is my 2nd favorite song, and I’ve never heard a traditional arrangement I didn’t love. This one is the choir of Clare College in Cambridge.

And my favorite Christmas song of all time?

So many versions of this song to love. Here’s the Mormon Tabernacle Choir:

Feel free to share your favorites in the comments.