6 Comments Posted by Shelby on September 19, 2011
I’ve found so many wonderful blogs through MYWTM with so many different perspectives, but one of my favorites is Disney On Wheels. I’m so excited that Melissa agreed to do a guest entry here. I’ll let her tell you about herself in her own words:

Why I Love Walt Disney World

Limited. It is not a word I like to use but on most days it is how I feel. I wake up get into my wheelchair and try not to think about what I can’t do. But there are days when none of that matters and I almost feel like everyone else. Those are the days I spend at Walt Disney World.

People are always asking me why I want to go to Walt Disney World so much. “Weren’t you just there” is a question I often get. They just can’t seem to understand why I love being there so much. I can only speak from my experiences but I feel like Disney has done as much as possible to make sure everyone can experience the magic. The Cast Members treat me in a way that creates a level of respect that I very rarely find other places. I love to travel and I love visiting new places but I never, ever feel like I am treated at the same level as when I am at Walt Disney World. We are currently planning our next Disney vacation and are planning on buying Annual Passes for the very first time. To say that I am thrilled is an understatement. To be able to visit the magic multiple times in the upcoming year is like a dream come true.

I think that Walt’s dream was accomplished. He helped create a place where anyone can go and have a magical experience with their families. Sure there are things that are too hard to do or I simply can’t ride but I don’t care. Nothing, and I mean nothing stops me from having the time of my life at Disney World, it is a place of unlimited possibilities. 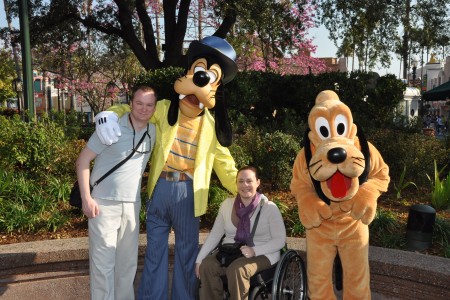 –Thank you so much, Melissa, for sharing your story with us.

More About Character Pictures at the Mouse-In-Law

Not that you should be swinging at cat at any theme park. Disney does have a kennel for that.

One thing I particularly love about the Disney characters is how good they are with scared children. I mean, I kinda get where the kids are coming from, meeting a mute giant anthropomorphic animal-type thing with an oversized head in an exaggerated expression of joy. When you’re like 2 feet tall, I get it. And there certainly are kids who burst out in tears at the approach of a character, which can be almost as frustrating as getting that ever-elusive Santa picture.

But the characters are great at approaching in a non-threatening way. I’ve got some wonderful pictures of Theo’s first meeting with Mickey last year along those lines. If the kids don’t want a hug or to get close, the character will offer a high-five, or sometimes just hold out their hand for the kid to touch or look at or sniff if the kid happens to be a dog. We had a fantastic experience with Donald Duck along those lines that I will show you in just a second.

First I want to say that pictures at Epcot were perfect because Mickey and friends were in a single room and there was an inside line with tv’s showing cartoons. Awesome. This was where we took our character pictures.

So for Donald, we sent Theo on his own and he was kind of freaked out. Upon approaching Donald, Theo decided that clearly the next logical move would be to ,  , ,   sit down on the ground somewhat near Donald. Rather than going over to Theo and looming over him like some kind of freakishly large oddly-attired duck, Donald simply sat down on the ground too.

Have a seat on the ground? Don't mind if I do!

Theo was a fan, and thus willing to entertain the idea of the giant-thing-on-tv-that-just-came-to-life-OMG-is-it-a-zombie? sitting near him.

The ground's pretty comfortable, isn't it?

And then we got a simply darling picture.

Donald is my friend! And he likes to sit on the ground just like me!

We then coaxed Theo into actually making contact with Donald and giving him a high-five. Actually, Theo learned from his swimming teacher that a “high-five” is a two-step procedure with an open-handed slap following by a fist bump accompanied by a “BOOYAH!” He is now very confused when he gives someone a high-five and then sticks out his fist and they don’t pound it. He’s not quite sure why most people aren’t familiar with proper high-five technique. 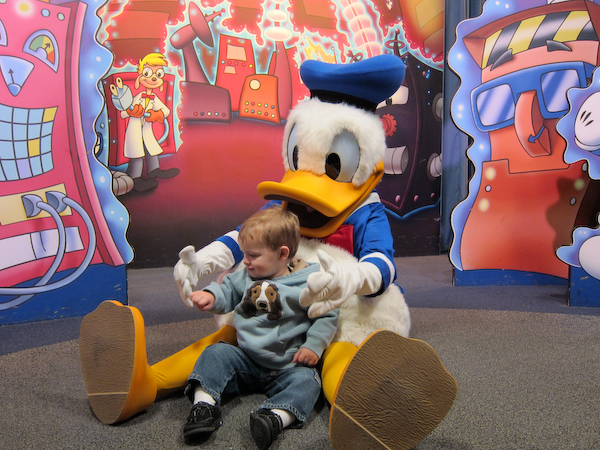 Theo is trying to give Donald a fist bump. Donald continues with the "slap me five" completely unawares

Following the positive Donald experience, Theo was ready for the Ultimate Cute with Minnie.

Prior to both Minnie and Donald, we attempted to take the family picture thing. The lighting was a little odd with Pluto here.

And there’s also the unfortunate timing shots. Despite what it looks like, I can assure you that Kevin is not stoned in this picture. 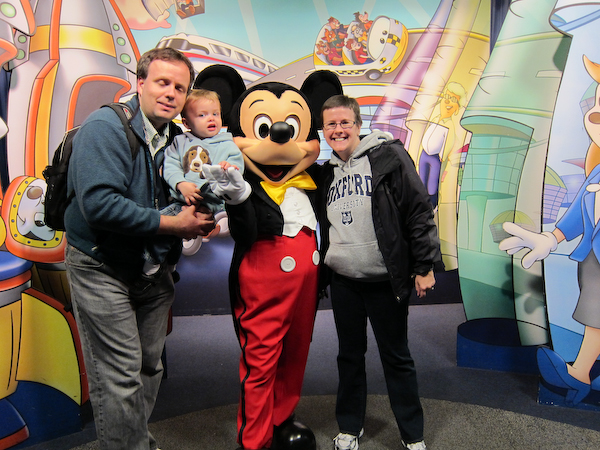 Say Nope to Dope and Ugh to Drugs!

Once again, we didn’t have an autograph book, so I’ll have to do that here at home.

Character Meal at the Mouse-in-Law

Hey, how about the new look? Swanky, hunh? I love it! Thanks Steve!

So character dining has always kind of fascinated me. We never did it as a kid. The closest we came to character dining that I remember was we had breakfast with Santa this one time. I don’t know if it was near Christmas or in the off-season or what, but I do remember eating breakfast and Santa walking around taking pictures. Or something.

Character dining options in Disneyland are a bit limited. You can do the dining inside Disneyland with “Minnie and Friends” (sans Mickey? I don’t know), in  California Adventure with the princesses, or outside of the park at breakfast with Mickey and Friends at the Paradise Pier hotel (the sort of bastard stepchild of the Disneyland resort), Storytellers Breakfast at the Grand Californian, or Goofy’s kitchen at the Disneyland Hotel with…well, whatever characters happen to stop by.

I will admit that the only character meals I knew of before writing this post were the princess one in CA Adventure and Goofy’s Kitchen, but I digress.

At any rate, my BFF came down from northern California with her kindergarten-aged daughter and we went to Goofy’s Kitchen. It was actually quite fun with good food, and we saw Goofy, Pluto, Chip and Dale, and so on. We saw the “minor” princess–Mulan, and an Aladdin strangely missing Jasmine. Because they want you to spend the big bucks to go into CA Adventure and meet the heavy-hitter princesses.

ANYway, so in my Mouse-in-Law planning, I asked around for a character meal, and several people recommended the Crystal Palace in the Magic Kingdom, which starred the Winnie the Pooh characters. Theo sleeps with a Winnie the Pooh and likes those characters, so I signed us up.

Theo loved it. Many of the meals at the Mouse-in-Law are buffets, so Theo got to enjoy a wide variety of food. That was a plus.

Incidentally, the following pictures were taken with my point and shoot. We also have other pictures with the DSLR and a video of meeting Piglet, but these will have to do for now.

We met Pooh first, and Theo leaned in for the hug:

Yes, I will give you a hug now

He was a big fan of drinking out of a cup with a straw, which he really doesn’t get to do at home. He does love his food and was having trouble being patient.

The other characters met us while we were eating. Theo kept trying to give Eeyore and Tigger his food (usually his roll). Both Eeyore and Tigger made exaggerated tummy-rubbing, hand to mouth motions that were clearly supposed to convey that they had already eaten, but they were going to pass on Theo’s roll. Theo would not be deterred. Offering food is his ultimate expression of love, and he loves the Pooh characters.

Take my roll, Eeyore. No, seriously, TAKE THE ROLL!

And then after supper was ended (so they say), Pooh came back around to our table. We expected Theo to be a little more welcoming, but he seemed put out that both Eeyore and Tigger turned down his food generosity, so he was a bit less inclined to be all lovey with Pooh again. That said, Pooh and the other characters had clearly been coached on taking pictures. Here’s Pooh all ready to go. Wish Theo was looking in the right direction and maybe even smiling too.

You can pose for the camera, but I won't

Oh well, what can you do with a two-year-old. Theo sure loves the characters though.

Yes Mouse Fans, it’s the post all of you have been waiting for (and by “all of you” I mean my mother): Theo’s First Haircut! Which was, as you may recall, our raison d’être for Disney World in the first place.

So let’s get on with the show. While the Harmony Barber Shop on Main Street does take walk-ins, there are only three chairs and I was advised to make an appointment. FYI: you make a haircut appointment through the WDW dining reservation number.

Theo’s hair was getting pretty shaggy, so we snapped a picture outside of the shop for posterity. 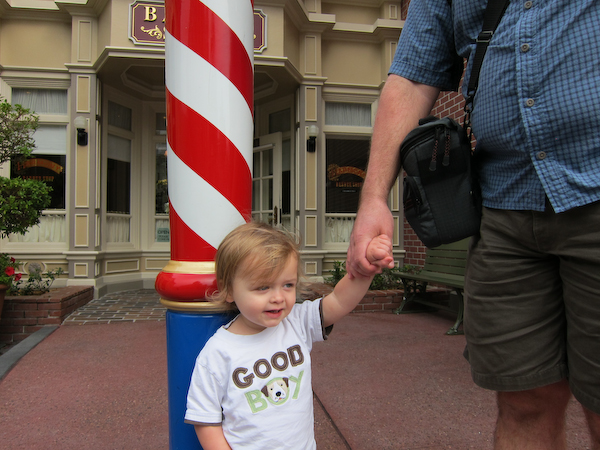 All dressed up and ready to go

Our barber was ready to get started. She set up the booster seat on the chair and we hefted him up. She pulled out a long strip of Mickey stickers and stuck them all over Theo’s tummy, shorts, and legs. He was immediately enchanted.

Will someone cut that kid's hair already? It's getting embarrassing.

So enchanted, in fact, that he didn’t even realize his hair was being cut.

First he moved all of the stickers to his right leg

He didn’t even notice when she wet his whole head down with the spray bottle. Those must have been some magical stickers because seriously, who doesn’t notice their head getting wet?

She was nearly finished by the time he showed an inkling of interest.

The haircut made him look like an entirely different kid.

Almost done! What a big boy!

And once it was all done, he received his First Haircut mouse ears and a Certificate of Bravery!

It was worth the entire trip.