I have a special place in my heart for the Carnation Plaza Gardens. It’s just a little stage with seating set back near the entrance to Frontierland. For amateur performing groups, this is the stage you usually perform on (unless you’re a marching band). Back in my misspent youth, I belongs to a performing group and we sang on this stage as well, so it does hold a great deal of nostalgia for me.

Put your cares away and step into the Carnation Plaza Gardens

You might be wondering why Carnation would sponsor just a little stage. It’s because back in the day, you used to be able to get burgers and stuff there. Not anymore. Now it’s just a peaceful, fun little place tucked away.

There’s a big gazebo that holds the stage, which is very cute. 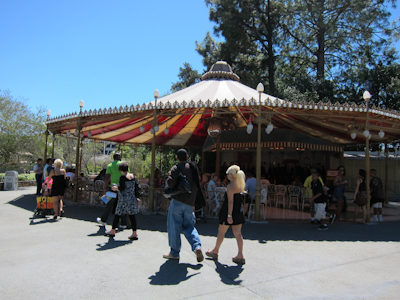 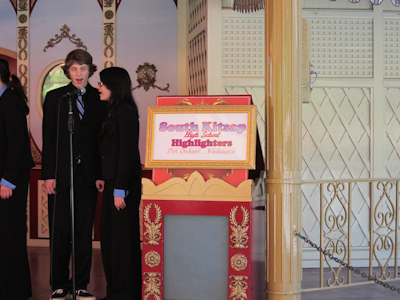 Because every choral group needs at least one podium

No idea where Port Orchard is? Me either, so I looked it up for you: 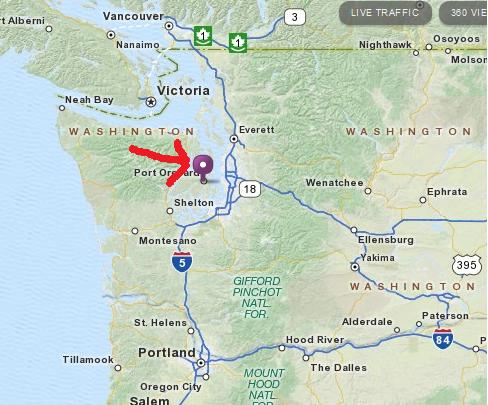 I was immediately drawn in by the Highlighters’ stylish jazz numbers. These guys sounded great!

I should probably take a moment to clarify that the group to which I belonged when I was young was not really that good. The Highlighters were significantly better than my old performing group.

They wore really classy outfits–black suits. Unfortunately it was 91.5 degrees that day, so they must have been positively sweltering. It reminded me of our family friend’s wedding in Arizona when it was a billion degrees. All of the groomsmen had ice packs in their pockets. Disneyland is not usually that hot at the end of March, but there ya go.

After the Highlighters finished, I took the opportunity to accost two women who looked like they were a part of the group. Lucky for me, they were.

I spoke with Beth Allen, wife of Mike Allen, who is the conductor of the Hightlighters. Beth’s son Jake was also a featured performer. Beth said that there are 20 kids in the Highlighters and this is Mike’s 23rd year as director. Woo hoo!

Beth told me that the Highlighters come down about every other year, and the kids fundraise their butts off to make it. Boy, do I remember those fundraising days. That was the worst part of high school. Okay, not the worst part, but it was pretty bad. Apparently, among other things, the Highlighters sang at a madrigal feast–which let me interrupt just a second here and say that I LOVE madrigal feasts. They also sold cookie dough and pizzas and all kind of other stuff.

However, as Beth said, “We stopped doing car washes.” To which I add a hearty “hear hear!” Car wash fundraisers seriously SUCK. If you ever find yourself in a position of having to participate in a car wash fundraiser, then do your best to get out of it. Fall out of a tree and put yourself in the hospital or something. I can assure you that whatever injury you sustain, it won’t be as bad as a  car wash fundraiser. 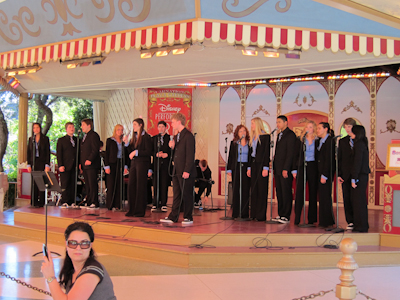 Here's another shot of the Highlighters in action

They did a fabulous job on the whole, but I have to say that my favorite part was at the end when they launched into the Glee version of “Don’t Stop Believin’.” I couldn’t help but sing along.

I also met Katie, who was a chaperone for the trip and a former Highlighter herself. Katie was so inspired by her experiences that she grew up to become an elementary school music teacher. Katie is on the left in this picture, with Beth on the right.

We need more music education in schools! Seriously, people!!! MUSIC EDUCATION IS SO, SO, SO IMPORTANT!!

I’d like to say that I was disappointed that I didn’t get to be on Oprah, but really, because of it, I did stumble across the Highlighters and was really glad for that.

And if any of the Highlighters are reading, leave me a comment! You did really well!