Sadly, Something at Disneyland I Won’t Be Doing

Well this is just going to blow my entire blog here, but I have some unfortunate news. I won’t be attending the “Pirates of the Caribbean: On Stranger Tides” movie premiere on Saturday, May 7th.

I know, I know, I hope you will still follow me.

Move premieres are a big part of Disneyland history, so when I heard that PoTC:OST (dontcha love how I just slipped into the lingo there? I’m so cool) was opening right in the middle of my year with the mouse, I thought “man, I gotta go to that!”

I love you people, but I don’t love you THAT much. To be fair, the ticket price goes straight to the Boys and Girls Club so it IS a tax-deductable donation, but that would require you to have a thousand dollars to tax-deductibly donate, which I do not. And you do get dinner and access to some rides and you get to hang out with some celebrities and you get a goodie bag, but that goodie bag better be filled with ten $100 bills for me to pay that kind of money to go to this premiere. And it’s not.

But wait! You can also go and stand next to the red carpet, which is black this year, and snap pictures of the celebrities. And I’d totally LOVE a picture of me and my favorite mulleted undercover cop of my formative high school years.

I was as straight-laced as they come in high school, but if you showed up as a "new student" looking for trouble, I TOTALLY would have found some drugs to sell you

I wouldn’t even mind that my favorite character from previous movies, the guy who WOULD have won a gold medal in archery at the Olympics if the stupid committee had stopped insisting that “Elves don’t have an official delegation,” isn’t actually in this one.

Hey South Korea, you may have dominated Olympic archery for over a decade, but Legolas can wait. He's immortal, and when Elves are recognized, he's taking you DOWN.

And hey, it’s free to just hang out next to the black carpet. What’s there not to love about free? So I was all gung-ho to do that, but then I found out that you literally have to camp out there in your spot all day, starting at like 5am.

BUT, I will throw you all a bone here. I went to the park earlier this week and caught some shots of the PoTC:OST setup. 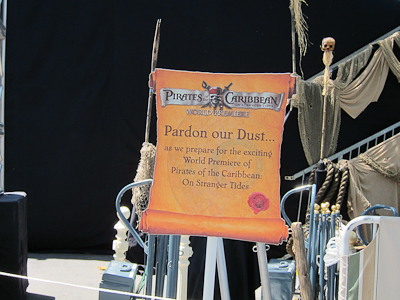 "Pardon our dust"??? This thing is frickin' HUGE!

Over at the hub, there are giant posts with lights and stuff attached. They are so cleverly camouflaged, I also ran into one before I saw it. 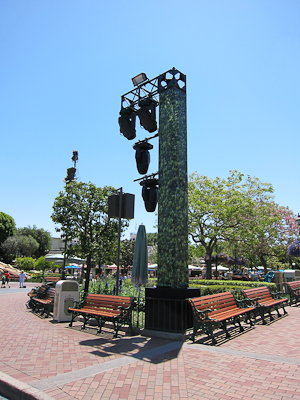 Are we supposed to believe this is a tree?

But the real action is over on the Rivers of America. According to the LA Times, PoTC:OST will be projected on a bigass 3D movie screen on Tom Sawyer Island, which is only fitting because they replaced every single Tom Sawyer-ish thing on the island with pirate stuff. Poor Tom, he’s lucky he even gets to keep the island name.

Anyway, so they’re showing it on this screen, and they built the huge bleachers to sit everyone. 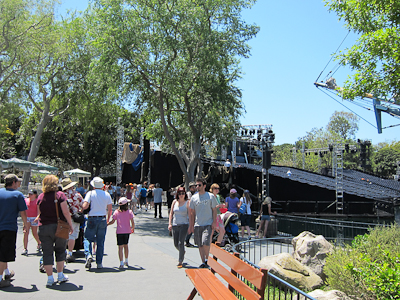 Bleachers are larger than they appear. No joke.

I guess they needed divers to put in supports for the bleachers, since they had to extend out into the river due to something about 3D needing a narrowing viewer area than 2D or something like that. 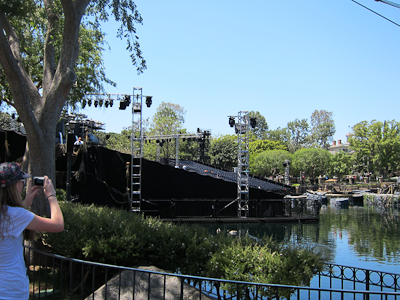 It looks like you could practically walk to the island

And the island itself was under massive construction. 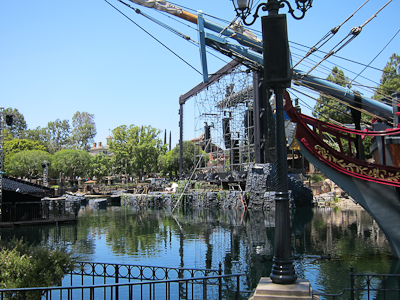 This looks so cool I almost wish I'd dug into the couch cushions a little deeper and come up with $1,000

But the real question is–what are they going to do with all of this stuff on Sunday?

6 responses to “Sadly, Something at Disneyland I Won’t Be Doing”