So of all the “dark rides” in Fantasyland, my absolute favorite is Peter Pan. I’m not sure why, really. I love the story for one, but the ride is so magical because instead of a regular omnimover on a ground track, you’re actually suspended on an overhead track giving the illusion of flying.

And let’s be honest–when I was little, I actually thought we were flying.

Anyway, the big problem with Peter Pan is the fact that it’s everyone else’s favorite dark ride too. The line is kind of insane.

The dude in front of me.

Peter Pan has a great facade and opening sign: 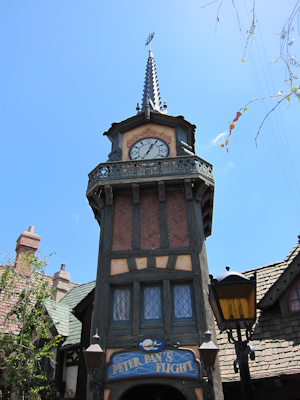 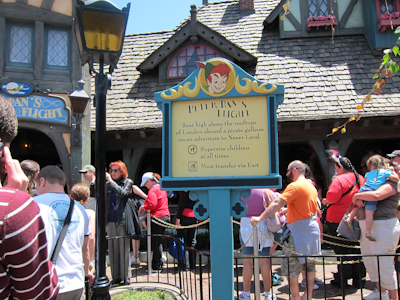 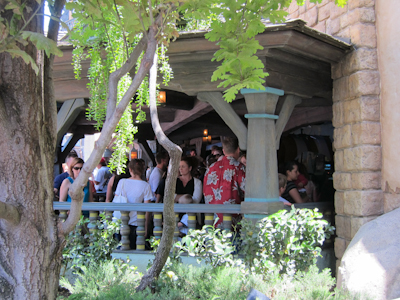 In fact, most times of the year, you zig zag no fewer than twelve times. TWELVE!

And strangely enough, when I took these pictures I ended up hearing “Shelby? Shelby!” in a familiar voice. Looking around, I recognized my friend Marce

I have not actually seen Marce in over 11 years. Go figure.

Finally, I boarded the ride. And now here’s the funny part. This is what I looked like getting on the ride:

Incidentally, these prescription sunglasses were stolen out of my car

Did I say “as I boarded the ride?”

Because I was there with my friend Carissa, and after I got off the ride I complained that it seemed overly dark and we waited all that time and maybe the ride was broken.

Or maybe I totally forgot and wore my sunglasses ON THE RIDE.

Yeah, it’s that second one. Sheesh.

Anyway, one of the reasons Peter Pan gets so backed up is that the ride vehicles are slow-moving and don’t hold many people (unlike the newest dark ride–the Little Mermaid, where the vehicle can seat a family of four).

So this is what the back of your pirate boat looks like, which is all kinds of helpful.

And then, like the typical dark rides like Pinocchio on which I permanently traumatized my toddler, the Peter Pan ride basically takes you through the story. 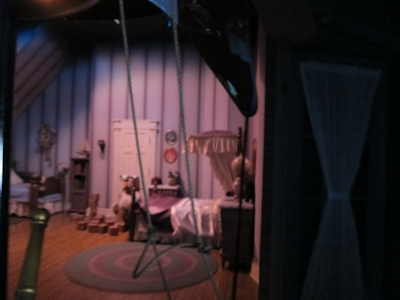 There's the nursery, and who doesn't want a dog as their nanny?

Much of Peter Pan is spent flying through the sky with stars that more or less look like this:

And you hit classic key points in the movie like the battle on the pirate ship:

A classic key point in the movie

If you’re smart and you’re not wearing your sunglasses, this ride is quite enjoyable, if very hard to photograph. And on my way out I caught sight of my friend Marce again!

What an odd coincidence

I still maintain that Peter Pan is the best dark ride of Fantasyland (I don’t count small world as a dark ride). If you’d like to ride it, try to hit it first thing in the morning before the line gets big, or if you see a reduced line, hop in.

I really do love this ride and I think you will too.