Now that we’ve got our General Information in Part 1, it’s time to move to our park maps! Yes, maps plural. Since the booklet is so small, they broke down each land to give it its own page. 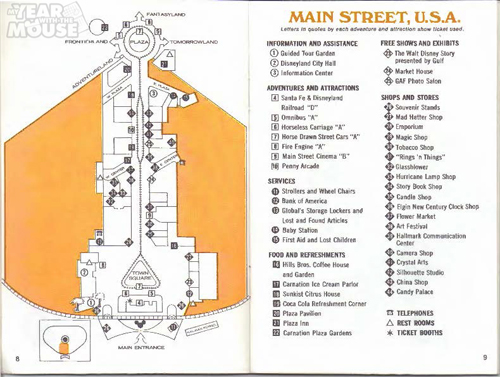 We start our tour at the turn of the century on sunny Main Street. Down in the bottom left, there’s the shape of the whole park with Main Street shaded in. And it’s all color coded for your convenience!

Interesting thing about Main Streets are the side street names. A little over halfway up you can see two diagonal streets. The one on the right is E. Center Street and on the left is, predictably, W. Center Street. The Main Street Cone Shop (doesn’t look like it existed in 1973) is actually on E. Center, as are the lockers and fruit cart. W. Center has the bathrooms at the end–that means that W. Center Street is now the outdoor seating for Carnation Cafe. It will be interesting to see how that turns out once the refurb is done next year, but I find it very doubtful that it will ever return back to being a street. Up at the top you see East and West Plaza Streets. Over on the corner of E. Plaza and Main you can find the information booth about other SoCal attractions.

Of note, the Market House (same location as now) was considered a “Free Show and Exhibit.” You might remember it as being the coffee store with the questionable Pinocchio chocolate candies. I do wonder what they were showing/exhibiting in there. All bunched up together south of W. Center Street are several interesting shops: Glassblower (a real glass blower), Hurricane Lamp Shop, Story Book Shop (oh, how I wish this still existed!!!), Candle Shop, Elgin New Century Clock Shop, and a Flower Market. None of these exist anymore except that I believe the clock shop is now the watch shop. I’d love to have seen the glass blower as well. 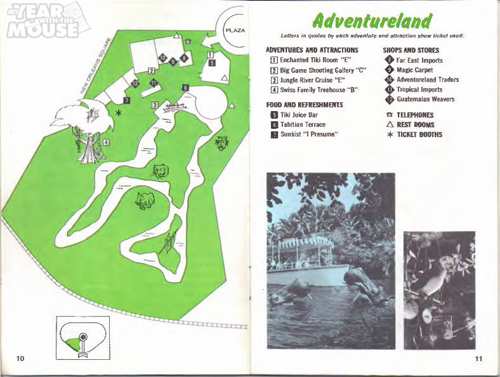 Holy mackeral, what is that giant winding river taking up almost all of Adventureland??? That’s the Jungle Cruise. I never pictured it as very big in my head, but of course it was the main attraction of Adventureland before Indiana Jones encroached on its space (and also took over part of the parking lot).

The little people waving on top of the treehouse are adorable, but I particularly love the “Big Game Shooting Gallery.” I can only assume you shot at now endangered big game targets. I bet that one was quietly shut down. You can also shop at the Guatemalan Weavers in here too. Go figure.

Also, there’s something called the Sunkist “I Presume” (just like that, quotes theirs) and I had to look at the back of the book to see that it served fresh orange juice (no suprise there), lemonade, donuts, coffee, and jungle juleps. I believe the “I Presume” part was a Sunkist marketing phrase. I just have to wonder what a jungle julep is, and I sure wish I could try one because it sounds good.

Of course New Orleans Square’s biggest attraction is the Pirates of the Caribbean ride with the Blue Bayou restaurant inside. I’ve only eaten there twice–once on my birthday and once when a friend came down and let me join her reservation, back in 2007 or so.

Missing from this map, as it’s also missing from today’s map, is Club 33. Haven’t gotten in there yet, but if you know a hookup, lemme know.

Also there is the Haunted Mansion. The best part of New Orleans Square is that it’s still almost exactly like this now. The stores have changed but it looks like nothing has really been added or subtracted. 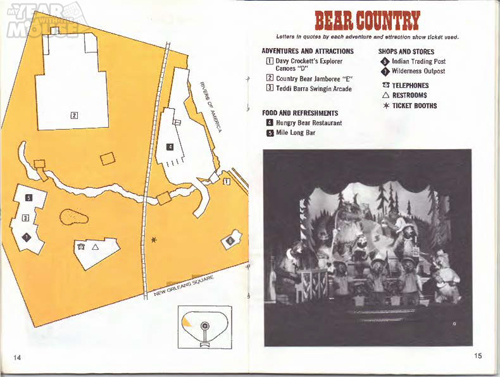 Bear Country got a name change when it added something more than bears–namely Splash Mountain. Although apparently the Davy Crockett’s Explorer Canoes are a part of Bear Country (I personally would have placed them more in New Orleans Square, but obviously nobody asked me). Also back there is the “Teddi Barra Swingin Arcade” which sounds very cute. And of course, the beloved Country Bear Jamboree. I have such good memories of this attraction and Theo in particular LOVED it at the Mouse-in-Law. Now it houses the weirdo Winnie the Pooh ride, although a couple of the singing head trophies from the Jamboree can still be seen in Winnie the Pooh.

While nowadays you just have the giant foldout map, I think there’s something kind of cute about a color-coded guide to the park. I mean really, the park isn’t THAT big or hard to get around. Particularly because, most notably on this map, there are no guides to the actual walking paths between lands. So you can have several pages of maps and still just wander around from one land to another. I do love the instructions when you exit the parking lot onto West Street–go left then left for San Diego, go right then right for Los Angeles. And incidentally, anyone non-local know what that section of West Street is now called?

I’ll just give it away–it’s Disneyland Drive and Downtown Disney now goes right over it. 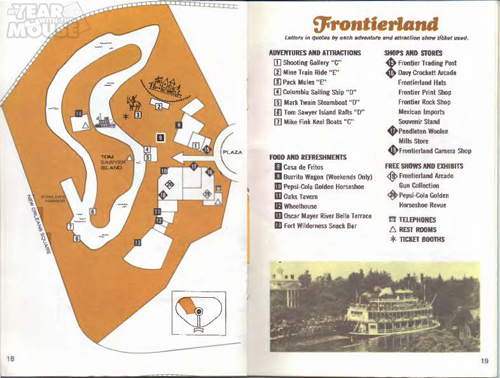 Continuing on our clockwise trip around the magic kingdom, we now hit Frontierland. Here you’ll find the regular shooting gallery–the one that still actually exists today, as well as the various boats on the Rivers of America. And also the one ride I wish I’d been on–the Pack Mules. E ticket indeed! I wanna ride a mule at Disneyland! Also of note over here is a print shop, now gone but I wish it weren’t. And if you’re hungry you can swing by the “Casa de Fritos” which of course involves “Mexican food specialties, combination plates, and Fritos.” I don’t know why that cracks me up, but I feel like I need to throw a Cinco de Mayo party and invite people over to my “Casa de Fritos.” What do you think?

Coming to you in alarmingly neon pink, we have Fantasyland! If you’re looking for attractions, Fantasyland is the place to go, since it’s chock-full of them. The awesome thing about Fantasyland is that out of 16 attractions, 12 are just like they were then, and the Fantasyland Theater still exists except in the form of the Princess Fantasy Faire (which is moving, did I mention that?). The only two attractions that are well and truly gone are the Motor Boat Cruise and my beloved Skyway. The Fantasyland Autopia is now joined together with the Tomorrowland Autopia making it one giant Autoporiffic attraction.

There’s aso a glassblower shop here (two of them? Not fair!) as well as “Merlin’s Magic Shop” which would be insanely awesome, if it still existed. In its place is currently the Heraldry Shoppe. The scale and perspective here is particularly weird, as it looks like the Tea Cups are directly north of the Carrousel when in fact, it is off to the right and hidden a bit.

Also, that tinted pink picture on the bottom is supposed to be a family in the teacups looking happy, but the one guy totally looks like he’s going to hurl.

Finally we conclude our tour with Tomorrowland. I had originally expected to find Tomorrowland stuffed to the gills with E ticket rides, but in fact over half are D tickets and only two are E tickets. Go figure. This is the classic Tomorrowland, and I believe out of all the lands, the one where the most attractions have been either moved or removed. Tomorrowland attractions in 1973:

Interesting! Also, much like today, there was a very limited number of places to eat and shop. And Circlevision, the only ride that actually made me puke, was a  free show.

And those are your maps of Disneyland 1973!