When I think about the word Omnibus, I think about Charles Dickens. No joke. I took this class in college called “Dickens and London” and it was an entire class about Charles Dickens and once we started to read fascinating classics like “Bleak House” I knew I was in the wrong class but it was too late to transfer to something more exciting. Which would have been pretty much anything. The only thing “Bleak House” has going for it is that one character dies of spontaneous human combustion, which is actually kind of cool. What’s there not to love about spontaneous human combustion?

And what does that have to do with Disneyland? I’m getting there. In Charles Dickens  the characters would often ride in omnibuses. They were new-fangled double-decker vehicles that in Dickens’ time were pulled by horses. You can read about characters who take an Omnibus to work or sometimes someone will get run over by an omnibus and that’s a hint to the reader that the character is totally toast, because while someone might survive getting run over by a carriage, nobody survives an omnibus. It’s like shorthand for “too bad we don’t have 911.”

Well Main Street, U.S.A. represents the turn of the century and by that time, omnibuses were no longer pulled by horses and–AND–you can ride one. Yes! That’s right! You can hearken back to the days of Dickens riding an omnibus minus the horse!

This has absolutely nothing to do with Charles Dickens AT ALL

The Disneyland Omnibus is one of the Main Street Vehicles that I have never ridden before. That’s right–a first time here on MYWTM! The omnibus offers a one way trip from Town Square to Central Plaza, or strangely enough, from Central Plaza to Town Square.

And did you know that all of the Main Street Vehicles are sponsored by National Car Rental? I didn’t know that until just right now! Go figure!

Anyway, the omnibus has two levels so obviously I rode on top.

Get a vintage vantage point from this Omnibus as it tools gently on a one-way trip down Main Street, U.S.A. Modeled after a 1920 New York City double-decker, this 45-passenger bus stops in Town Square and near Sleeping Beauty Castle in Central Plaza.

This is only slightly problematic because Main Street, U.S.A. is supposed to be the early 1900’s, so if the omnibus is modeled after an 1920 bus, shouldn’t it belong in Tomorrowland? 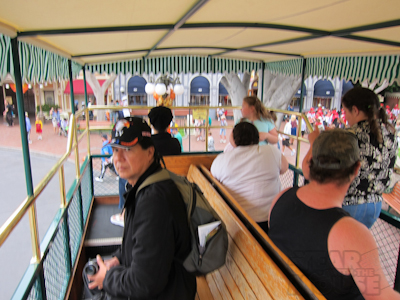 Looking out the front

Another thing with the omnibus is that the foot space is very odd. I’m going to post a picture here that will seem like some kind of bizarre angle and be completely meaningless:

But the black rubber is the ground and the wood is a panel right beneath the seat. My heel, which is clearly seen is being blocked by the wood panel, shown in the bottom of the picture. And hey, nice shoes!

Which is a very long and bizarre way of saying that when you sit down, your heel has nowhere to go since the panel blocks under the seat.

Let’s just move along, shall we?

The omnibus gives you a bird’s-eye view of Main Street, if you were a very low-flying bird.

You’re roughly on the same level as the top of the Emporium, which includes jack o’lanterns in almost every window.

As you drive along your driver gives you a little history lesson about Main Street and omnibuses, although glosses over the little part about how the omnibus is modeled after a 1920 vehicle (they do tell you that) and Main Street itself is turn of the century. Oh, it’s the little things that trip you up.

However, you do get an awesome view of the castle as you travel down Main Street.

It's very cool to see it from a height

I actually really enjoyed my omnibus ride! And I recommend the Town Square to Central Plaza route because of the castle.