Over on Main Street there’s the Emporium on the left if you’re standing in Town Square and looking at the castle. Over on the right, across the street, is a store called the Disney Showcase. 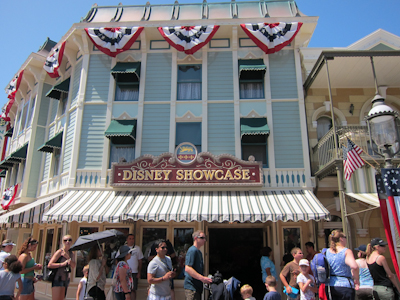 It's All American or something

However, The Disney Showcase is not marked with BIG GIANT LETTERS if you’re actually ON Main Street: 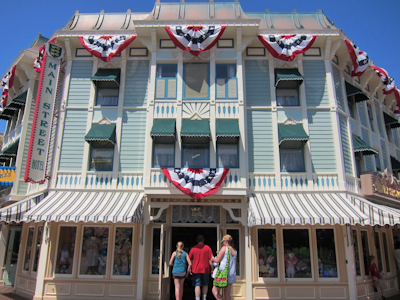 It's sort of unassuming and big at the same time

The part on Town Square is where you’ll find the Straw Hatters when they’re doing their whole show with Donald, Pluto, Mickey, and Minnie. 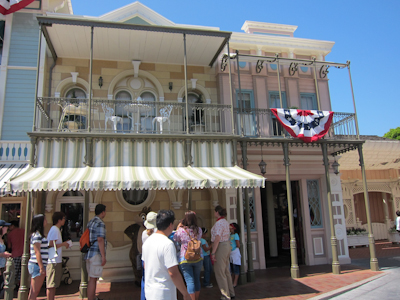 And also a great place to look for characters

The Disney Showcase contains clothes and some Disney knick knacks 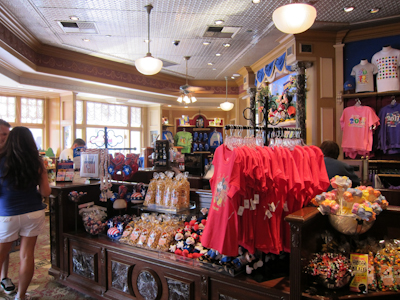 If you look up, you’ll see some very cute above-shelf decorations 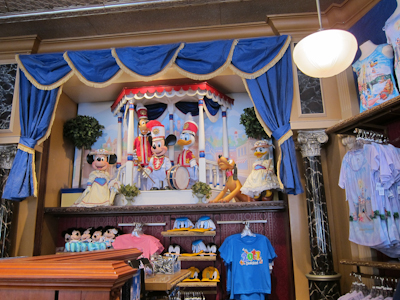 There are also a couple of hat writing machines. 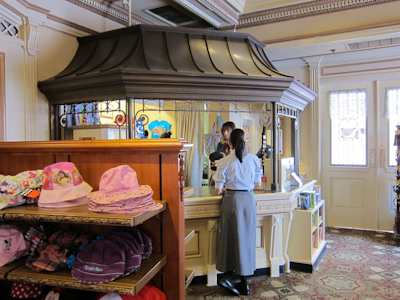 Now let me take a moment to bid a fond farewell to the old hat writing machines. The old machines were sewing machines that only sewed in two directions–I believe down and to the left. The hat writer was a cast member who had to flip the hat inside out, fit it into the machine backwards, and then write the name on the hat by moving the hat around by hand. And also do it in the correct handwriting-look font. I mean seriously, that was a SKILL. Now hat writing is done by automatic machine. The advantage is that you have more options–the traditional font or a couple of others if you want to pay more, different thread colors, and more room for two lines with one font. The downside of all of these choices is that hat writing now takes for.ev.er. Especially if you get a backup of several people. Oh my gosh, for realz, you could go get a churro and come back for your hat. And I do recommend the churros you know. 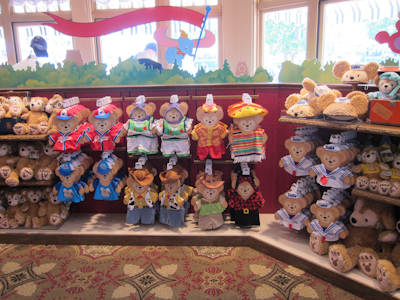 And his various outfits

As the story goes, Minnie Mouse gave Duffy to Mickey as Mickey traveled the globe so…he wouldn’t forget her? Something like that. Duffy actually has a Mickey Mouse shape on his face–a fact I just now noticed. Anyway, you’re supposed to take Duffy on all of your travels and take pictures of him in various places like a gnome. Duffy also show up at the Mouse-Next-Door for a meet and greet. It does seem weird that out of all of the characters Disney has in their cartoons and movies, they had to invent a new one for this purpose, but there ya go.

And that’s the Disney Showcase! My final piece of advice is don’t wait until the end of the night to get your name on your hat.