New Orleans Square is a little tucked-away area that few appreciate. Most people know it as “that place you walk through when you get off of Pirates of the Caribbean and also when you eat at the Blue Bayou.” But Walt designed it to be an actual street—well, couple of streets, and they’re especially cool at night.  There’s a hidden court back there that I will blog about later, and several stores. One opening on the court is Le Bat En Rouge. 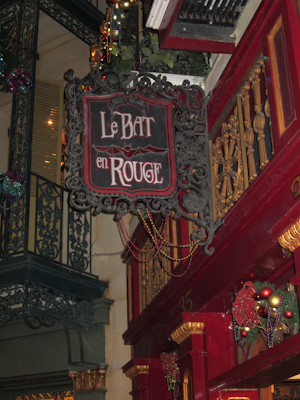 The signs in New Orleans Square are all pretty cool, and this one is no exception.

Le Bat en Rouge is a tiny store located on a corner with a supercool exterior.

It’s just a small clothing store without very much theming inside, unlike most of the other stores. I didn’t get a chance to really take a lot of pictures in there, so you’ll have to deal with these. Sorry!

Here’s what it looks like from the hidden court. 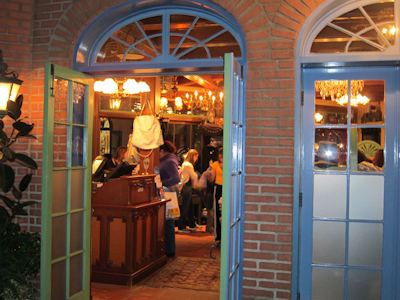 Ah well, at least the front is cool.