Well I gotta cover ElecTRONica soon, since it will be going away. Its replacement is the Mad T Party which quite frankly looks super-awesome. The Mad T Party opens on June 15th, which will pretty much be the most awesome day in history.

ElecTRONica is a nighttime dance party themed on the movie Tron.

Here's a picture from the side

It’s in the Hollywood backstage area.

Now I should probably say that I didn’t see the movie TRON: Legacy, which was the second Tron movie. This is what happens when you have a little kid. 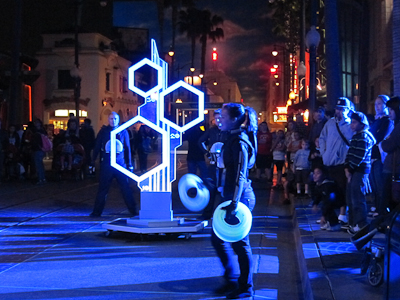 Right outside of Off the Page was this cool disc throwing competition. I wanted to play, but they didn't pick me, sadly.

Tron also features into a singular experience I had at Disneyland–the only time I have ever been evacuated from a ride. It was back *mumble* years ago on the Peoplemover. Back then, the Peoplemover went through a tunnel that was the “World of Tron.” It had this super-speed film of the light racers zooming back and forth. The nature of the film was to give the illusion that you yourself were going extremely fast and making these turns and cutting people off and whatever. It was disorienting, but over pretty quickly.

Unless you got stuck there.

We were there, in the tunnel, movie racing around us, for a LONG time. At first it was like “wow, this is cool!” and then it was “Hmm, I’m feeling a bit motion sick” and then it was “please make it stop.” Looking around, all of us basically had our heads in our laps trying to block out the view. Finally it shut off and a cast member appeared to walk us out. It is a true testament to Disney that in all the times I’ve been there, that’s the only time I’ve ever needed to evacuate. 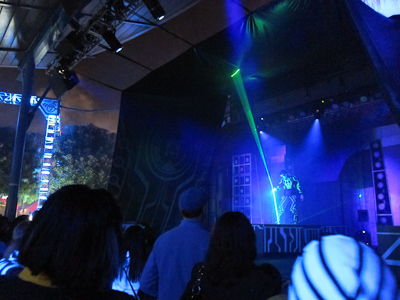 Over here on the stage

It probably doesn’t look very impressive but I can assure you, it’s impressive in person. There’s that beam of light and he moves it around and bends it and stuff. Very cool.

Much of the area is open for dancing, with round platforms and cast members in costume to make sure that nothing gets too out of hand.

It was a weeknight, so it wasn’t in the least bit crowded. That helped. There are lots of projections everywhere. 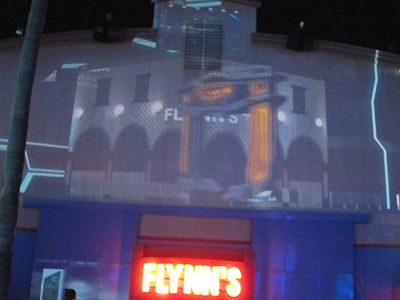 City of the future!

And also a bar for refreshments 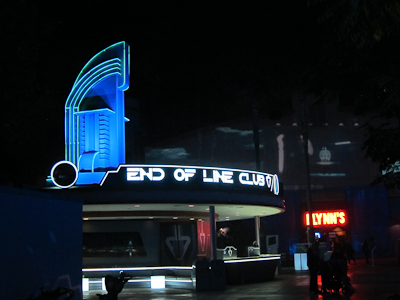 Are there churros? I don't know. It was closed.

Also incidentally, in the best commercial Disney ever made, where Darth Vader finds Star Tours closed and spends the day riding the attractions, ElecTRONica is the only non-Disneyland Park clip. Heh.

There’s Flynn’s, which is an old school arcade. 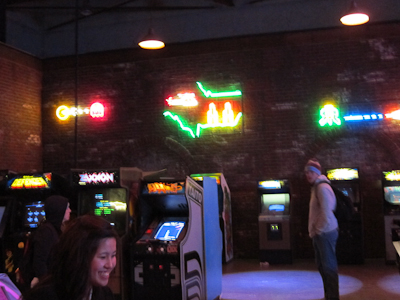 Boy this takes me back

When I was younger, Santa used to fill my stocking with quarters so my brother and I could go to the arcade. Those were the days.

ElecTRONica is very cool. I am also looking forward to the Mad T Party, which I suspect will be cool too. Because what isn’t at Disneyland?