Yep, that’s the Tarzan call. You’ll just have to say it in your head with me.

Now over in Adventureland is Tarzan’s Treehouse. 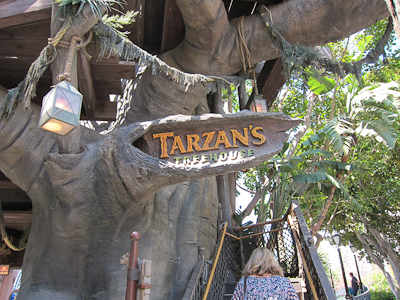 Cleverly distinguishable by this sign and also the fact that it's a giant tree.

Up to this point I’ve been avoiding Tarzan’s Treehouse because taking a stubborn 3-year-old up and down those steps pretty much sounds like hell to me. Fortunately I got to meet up with my friends Ingrid and Rachel and the three of us decided to go for it.

I’ve never actually been in Tarzan’s Treehouse. Shocking, I know, but that’s the whole point of MYWTM.

I have, however, seen the Swiss Family Treehouse, which is what Tarzan’s Treehouse was before Tarzan moved in. Poor Robinson family–displaced AGAIN!

Now the best thing about the Swiss Family Treehouse was the elaborate irrigation system they had. Just like in the movie, there were these buckets and a paddle wheel and little channels for the water to run through.

Tarzan, on the other hand, had no running water. So much for that upstairs master bathroom. Bummer.

Once you get to the second tree, there are books telling the story of Tarzan.

They're actually written by Jane, the hostess with the mostess, who invites everyone in to take a look around. However, you'll have to use the bathroom in New Orleans Square or the entrance of Adventureland if you have to go 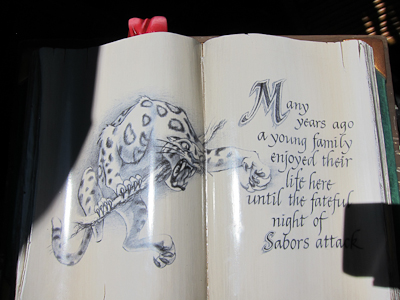 "Many years ago, a young family enjoyed their life here until the fateful night of Sabors attack"

Uh-oh, Disney. Sabor is the name of the leopard. His attack is therefore possessive. Which means that it should read “Sabor’s attack.” Oops.

Anyway, you don’t want to get into that because here is Sabor and he’s pretty much going to eat you.

Adoption is a wonderful way to make a family 🙂

It's like they're watching television or something, except it's a magic mirror? Confession time: I haven't actually seen the movie

Here’s a picture of something that I took from the top of the treehouse. It’s kind of a bummer because when it was the Swiss Family Treehouse, you actually knew what everything was.

Kala was a great mom, apparently. What are your happy memories?

Enter Jane and our first look at grown-up Tarzan. 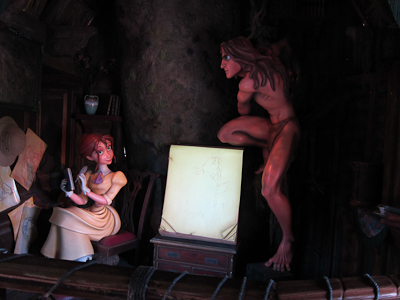 He's kind of a stud, but I'm not a fan of his hair

There’s also some kind of magic canvas that draws Tarzan by itself. I’m sure this has some kind of meaning from the movie, and I’m sure one of my sharp-eyed readers will be able to tell me what it is.

It's cool and everything

Then Jane talks about teaching Tarzan to be human, and Tarzan teaching her all about the apes.

Who got the better deal here?

And then it’s time to leave.

Jane sums it all up by saying they all live happily amongst the trees and take a look around, make yourself at home.

What did I say? Hostess with the mostess!

The book says “You may make a discovery of your own.” No kidding. 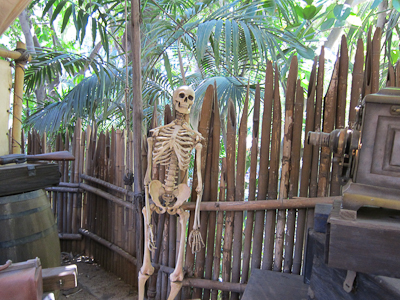 OMG, it's a dead person! Definitely did not see that one coming.

Down on the ground there are two “rooms.” The Robinsons used them for the kitchen and library, but it’s hard to tell what Tarzan and Jane use them for. There is a bamboo microphone-looking thing that says “Yell in here,” but my friend Rachel tried it and didn’t really get anything out of it. Maybe a crude intercom?

Tarzan’s Treehouse is a fun little Adventureland detour if you’ve got some time on your hands and don’t mind the stairs. However, it’s not as good as its predecessor. Maybe one day Tarzan and Jane will figure out running water.