So there’s a lot going on at the parks now, including some changes.

The Haunted Mansion is now down for its holiday overlay to become the Nightmare Before Christmas. This ride has been a pain in my side for a while now, because I can’t go on it with Theo and I’m generally at the park with Theo, so I haven’t covered it yet. And now I’ll have to cover the Nightmare Before Christmas version. My life is so hard *sigh*.

The beach balls have been taken out of Luigi’s Flying Tires. While this is significantly less festive, I think it’s an improvement, since people got so focused on the balls they kind of never went anywhere. Disney also pulled out about 20 pounds from the bottom of each tire. Originally the tire had a handle that spun the tire in a circle, except people mistakenly thought the handle would drive the tire rather than leaning. Oops. So they took the handle out, but kept the mechanism in place that made it happened. This has now been removed, resulting in lighter tires, and the lighter a tire is, the faster it is. I haven’t been able to test out the new configuration, but when I do, you’ll be the first to know about it.

Over at The Restaurant That Can’t Decide What It Wants To Be Called, the archway proclaiming it to be the Corner Cafe has been removed. I haven’t seen the change in person yet, but I know it’s gone. 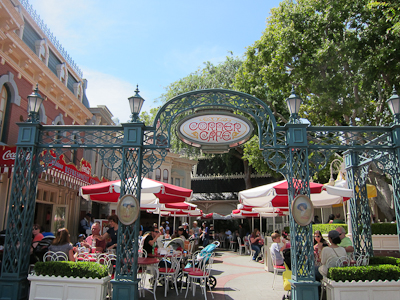 Indiana Jones Adventure is going down for a refurb. It needs it.

The Candlelight Processional, which has traditionally taken place over two days with four performances, is now schedule to run for 20 days this year. I have no idea how they are going to pull it off but frankly, I’m a little nervous.

I think you should follow Rays of Disneyland. It’s a cool chatty Disneyland blog that I like checking in with.

Everything Else Disneyland changes
← Elias And Company Red Car Trolley From The Inside, Woot! →