I think it’s great that DCA is getting more love these days, and holding the Lunar New Year festivities there was a great idea.

Okay, okay, Lunar New Year was like a month ago. I’m busy y’all, and you’ll see why below.

I dressed Violet up in her qipao and off we went! 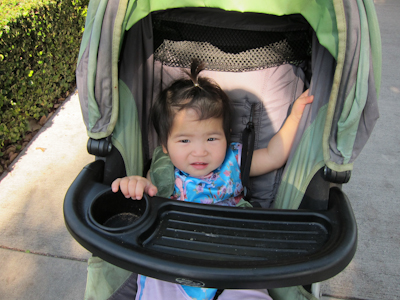 Archway to the whole shebang 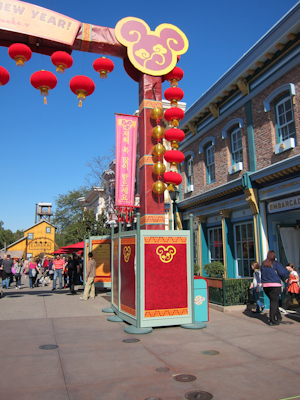 Closeup (sort of) of a pillar

I loved the Mickey head design.

I kept trying to get a picture of both kids standing still and smiling, but as anyone who’s tried to take pictures of multiple kids know, it was a challenge.

Probably should have moved them out of the sun or something. Oh well.

The Lunar New Year celebration had some crafts you could do. They were very cool. Since this is the year of the snake, Theo got to make a paper snake.

The helper was extremely helpful

She spent a lot of time with Theo helping him, which he needed but still made him feel like he made it himself 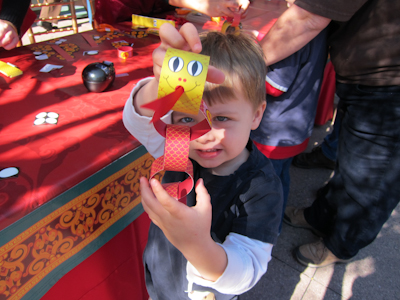 Then he insisted on making one for Violet, which was a pain because I had to then keep her from eating it the whole time.

There was also a lantern-making booth where you colored a piece of paper and then cut it up for a lantern. I don’t want to pick on my child, but Theo is pretty much the World’s Worst Colorer. He doesn’t have any patience for it so he just randomly scribbles and calls it done. I already had my hands full because he decided to bring along his kid camera (a kid-proof real digital camera with questionable quality photos), I was holding two paper snakes, and Violet is a runner so you can’t let go of her hand at all. So, I forbid the lantern. He pouted for a while but got over it when I bought the special almond cookies in the cool little white Chinese take-out box. 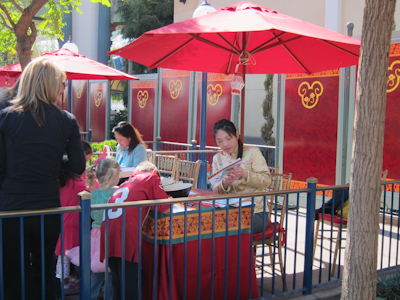 No lantern for you!!

They had women wearing traditional outfits twirling ribbons. They invited the kids to twirl the ribbons too, but Theo wanted no part of that. I have no idea why.

But twirling ribbons is fun!

They also had special characters. We missed getting a picture of Mulan and Mushu, but we got both Mickey and Minnie. Violet actually stopped moving for once while we were in line for Mickey 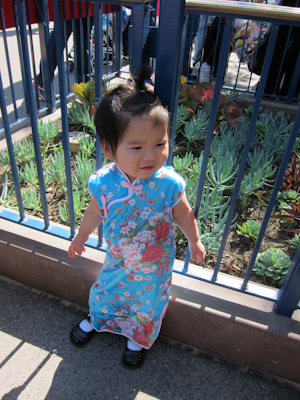 After this she immediately took off

She was fascinated by Mickey’s outfit. Unfortunately that meant she wouldn’t turn around for a picture. 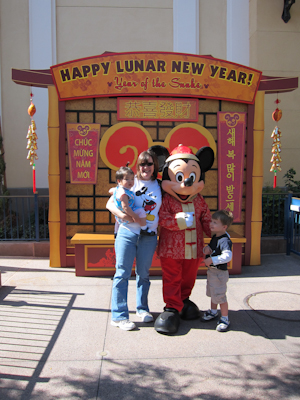 I realized later I was wearing my Hong Kong Disneyland shirt. I promise, that was a complete coincidence.

And here’s a montage to explain how I spend my days now. Violet likes to run. She never stops moving. My dad calls her Hurricane Violet. It’s difficult when I’m by myself with both of them to take pictures because she’s usually taking that opportunity to make a break for it.

Theo tries his best to hang on 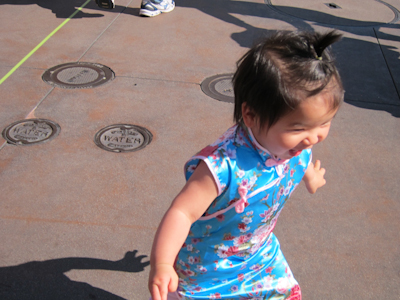 She never misses an opportunity to dash

I’ve lost over 10 pounds chasing her around.

Minnie did turn into a more successful photo shoot. 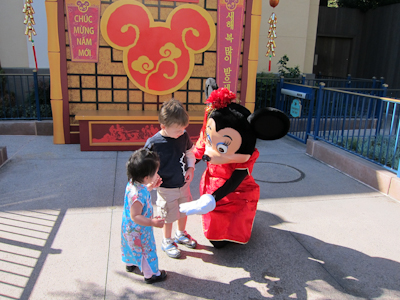 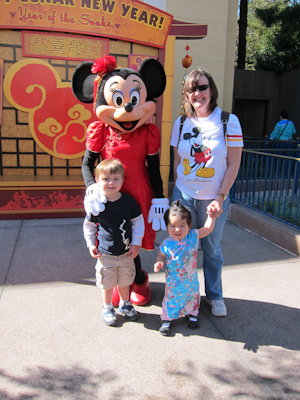 I had to step in again

One of Theo’s favorite parts was taking along his camera. It doesn’t have a strap of any kind so it’s a pain in the butt to carry around, so this is the first time I’ve let him take it to the parks. He promised to hold it the whole time, which means that I ended up lugging it around most of the time. But we might have a budding photographer in our midst! He was fascinated by the Photopass photographer taking pictures of Minnie and begged to take his own picture of Minnie. I lined him up on the other side of the stanchions thinking he could just grab a shot whenever, but the cast member/handler overheard us and invited him in. She asked the next guest in line to hold off a second, then the Photopass photographer moved over and showed Theo where to stand. Minnie posed, and he got his picture. It was adorable.

Finally, we watched a troupe of Lucky Lion Dancers perform. They were fantastic! 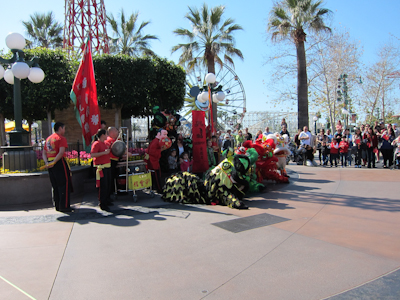 Violet was a little unsure about the whole thing though. 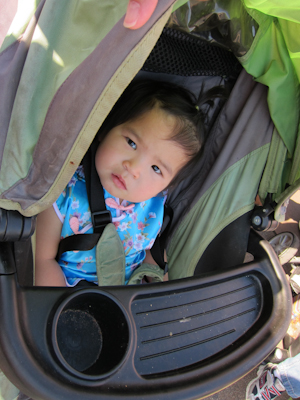 All in all, it was a great celebration and we had a really good time!