Back in Part 1 I told you all about getting into the club, dinner, Fantasmic!, and the restroom. Now we’re on to dessert. 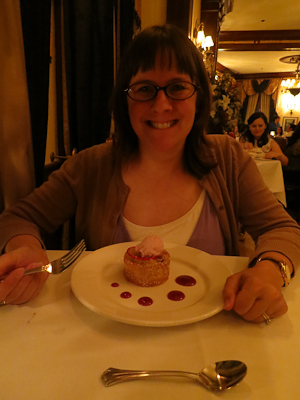 It’s dotted with raspberry stuff–SIGN ME UP!

And as any good Disneyland fan knows, following Fantasmic! is…

I didn’t bother going outside for these. I missed the audio, but I was still enjoying my meal and after the break we took for Fantasmic!, it really was time to enjoy the meal. Plus, you see that nearly empty wine glass in the forefront? Tragic.

At this point we realized that other people were taking pictures inside the restaurant, so as gauche as it may have seemed at the time, we just went ahead and took pictures. Starting with asking the server to take a picture of us.

The situation with the flash got weird

Not our best shot. Also, no more wine. Sad.

I made Kevin take pictures of the dining room because he’s a better photographer than I am.

I want this lighting fixture. Yes I do.

Our bill arrived in a lovely Club 33 bill holder thingy. I totally wanted to steal this one too, but that would have been way obvious.

Back in the day, you got a commemorative matchbook with your meal. Now you get this. 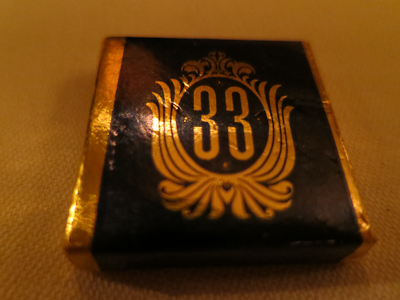 Kevin had to use the restroom at this point, so of course I made him take the camera. Sadly, this is the only evidence he returned with:

He has more class than I do. Which apparently isn’t hard.

It was awesome just looking around at all the details of the club. 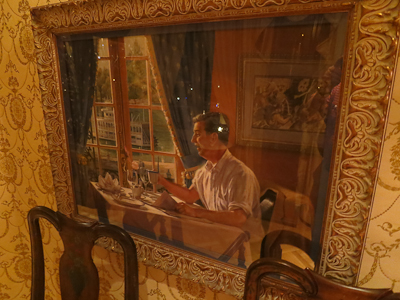 Walt eating at Club 33? Actually he died before he ever got the chance.

There was a telephone booth. I forgot to ask if the phone actually worked.

Actually I recently broke a sconce at the cabin. I think this would be the perfect replacement, don’t you?

Sort of a safari theme

This vulture was the start of it all. It was actually intended by Walt to be an audioanimatronic bird like those in the Tiki Room, to listen in on people’s conversations and then respond.

Because how bizarre would that be? And by bizarre I mean awesome.

This duck, as far as I know, is completely innocuous.

And other stuff in the room: 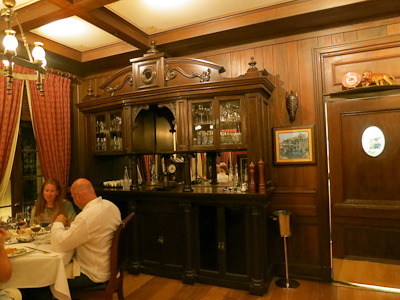 This amazing buffet, and the lone table of people eating in the room. That was awkward. 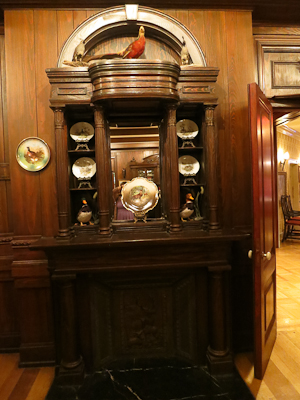 Obviously I need one of these

The plant totally completes the tableau

But finally, we could drag our feet no longer. There’s a set of Club 33 merchandise you can buy and I was DESPERATELY hoping to get Club 33 mouse ears, but the cast member said that they had completely sold out. Instead we got a commemorative wine glass and a keychain.

All in all, it was truly a magical night. What an amazing experience, with an amazing meal. I am so thankful to my reader (I don’t know if she wishes to be identified or not :)) for giving us this opportunity of the ultimate date night.

Did we want to take the elevator downstairs? 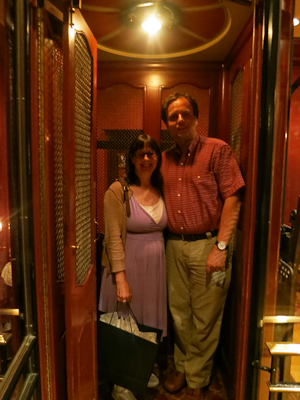