Yee-haw! It’s time to mosey on over to the back of the park–no, not Toon Town, the other back of the park–for a round-up Jamboree (speaking of which, I haven’t done a Search Engine Roundup in a while, have I?).

You know, you would think it would occur to me to take pictures of the entrances to things instead of just the things inside of the things, but I forgot, so…

Actually I say “initially drew me back there” because I had heard of this Jamboree thing but hadn’t been over to check it out or anything, and then I get this Facebook message from my friend Kristin, who was like “OMG DID YOU KNOW THERE ARE CHARACTERS ALL OVER THE PLACE FOR PICTURES WITH NO LINES AND IT’S SOMEWHERE BACK BEHIND THE COWS AND STUFF???” Not a direct quote, but that was the gist. And I thought oh yeah, that’s what the Jamboree is!

Theo was so uninterested in taking a picture with Goofy that he wouldn’t even let me put the stroller up next to him, so here’s someone else’s kid interacting with Goofy.

There were a bunch of characters there, all dressed in Western outfits–even Clarabelle the cow and Horace the horse.

While Theo couldn’t be bothered to post for a picture with the characters, he was completely enchanted by this stationary fake cow in the bushes. 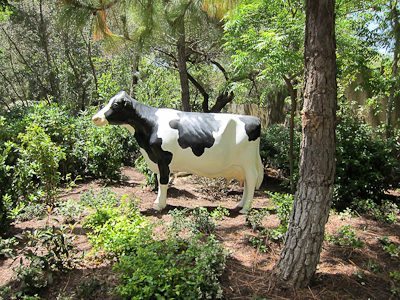 He found it so fascinating I felt obliged to take a picture of it.

There were booths of traditional Western-type crafts and such. For example, quiltmaking. 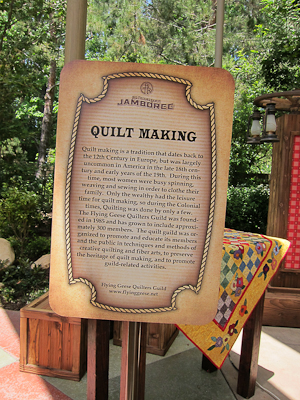 A brief explanation of quilt making, which is to say, making quilts 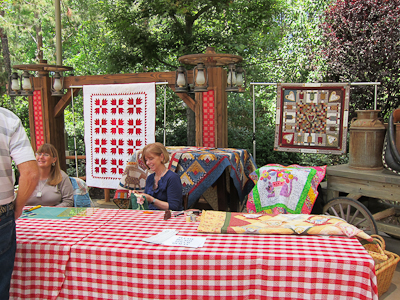 They were kind of cheating by using machines. They should be sitting their spinning their own wool into thread, then thread into fabric, then fabric into quilts, if they really want authenticity

My mother in law is a fabulous quilter, by the way. 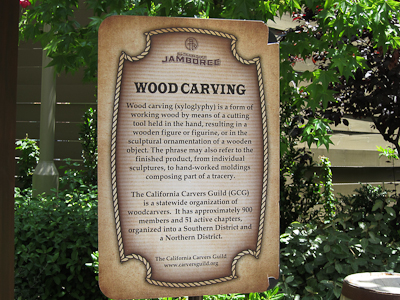 Explanation of wood carving, which is to say, carving wood

They had a Real Live Woodcarver there, and he was really a nice guy.

Unlike another prominent Disney woodcarver, this one was not carving a wooden boy because he wanted a real son and it was the next best thing

His table of carvings was impressive. Unfortunately, none were for sale. 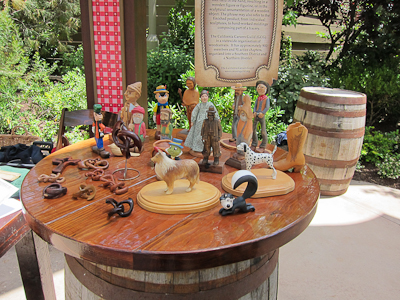 The Disney characters were awesome!

And look! There’s a Pinocchio! Heh.

For the kids, you could try out twirling a lasso

It was kind of a cheater lasso, really

But Theo’s favorite part was the low-tech one

You could just pick up your free coloring sheet and the little tables had baskets of crayons.

Finally, Theo’s having a good time

The best part was the performance.

The dancers grabbed willing audience participants to do a little country dancing. 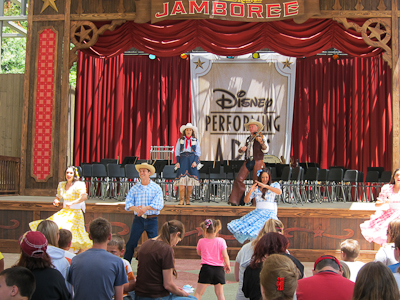 And they had some helpers 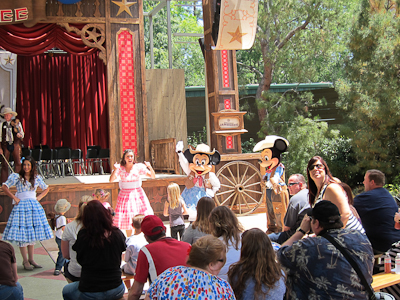 Right now the Big Thunder Ranch Jamboree is on Fridays, Saturdays, and Sundays, and I believe in the summer season you’ll find it every day. Check your daily entertainment guide!