At the back of the park right next to Mickey’s Toontown stands a theater. When I was younger, there were various shows there–I saw Beauty and the Beast one time–but at night it would change into Videopolis.

Videopolis was Disneyland’s version of a night club, where they turned the lights down low and cranked up the pumping bass and surrounded you with “I Want My MTV” videos everywhere. It was seriously the most awesome thing EVAR!

Just kidding. I never went in there. Because really? If I wanted to go clubbing, I’d go to a club. Nobody comes to Disneyland so they can be in a mosh pit or whatever. Despite that, according to the highly reliable Wikipedia, Videopolis survived an entire decade–1985 to 1995.

You get one-on-one time with them, which is nice for conversation and also very similar to what we found at Epcot. Except with princesses.

Well, in order to check out the Princess Fantasy Faire, I figured I needed to find myself a princess. Fortunately, Princess Katie came to the rescue. 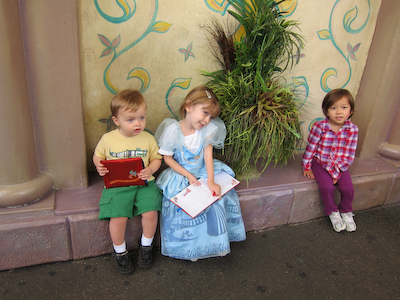 Princess Katie, a dazed Theo, and some other kid wait patiently for the princesses

Before entering the Fantasy Faire, for some reason I thought there would be a number of them. Like maybe all of them. This turned out to be incorrect.

My first clue was when we walked in the front gate and saw Ariel (post-mermaid transformation). Ariel used to sit in this little seashell cove flapping her tail, which was adorable and shaded, but now she walks around like a real person, and it can be difficult to tell that it’s her because she is only shown as the human princess Ariel for like 0.00009 seconds in the movie.

Seriously, the hair is the only giveaway. That and I happened to have Princess Katie and her mom there and they said, “Oh look! It’s Ariel!” As we walked back to Fantasyland, we also came across Cinderella and Snow White.

Disney has a firm policy about characters. It’s the classic Disneyland trivia question: How many Mickeys are there in the park? One. You will never find a character in one part of the park and then stumble across them seconds later in another part. So once we passed Ariel, Cinderella, and Snow White, I truly began to wonder what the Fantasy Faire had in store for us.

The wait was relatively long–about 45 minutes. Bless my friend Kelli and Princess Katie, who waited in line and let Theo and me go knock ourselves out at Toontown only to join them at the last minute. Which was good because he definitely would not have waited that long. But typically the wait is about 60-90 minutes, sometimes more.

Once we were ushered in by a cast member whose costume was best described as “velvet carriage footman chic,” I realized that the whole Princess Fantasy Faire was really just three princesses.

Seriously–if I’d waited 90 minutes only to find three princesses, I’d probably throw a fit and ask for Viedopolis to come back.

The upside is that the princesses really do spend some time with the kids chatting with them and being very princess-y. First we saw Sleeping Beauty:

Both Aurora and Katie are doing the hold-the-dress-out thing. Perhaps this is proper princess etiquette I wasn't aware of.

Theo was pretty skeptical. I couldn’t blame him, given all of that pink. At this point we were packing some serious baggage. We had Kelli’s camera, Princess Katie’s autograph book + pen, my camera, Theo’s autograph book + pen, a photo pass card, and probably some other crap I can’t remember. Seizing this perfect opportunity, I completely unloaded everything I was carrying into Kelli’s arms and asked her take a picture of us. The angle is a result of juggling too many items at the same time, not a deliberate artisic choice. 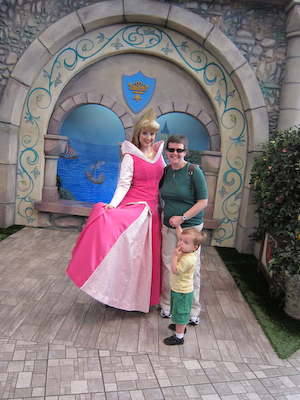 After Aurora we moved to Mulan. Mulan happens to be my favorite princess for two reasons: 1) She’s not white, and lord knows we could use a little more diversity in our Disney entertainment, 2) She’s the one princess who, well, actually does sh*t. Mulan is not going to wait for fate to take over her life. Mulan is going to take her fate into her own hands and kick some ass in it.

I can totally get behind that.

Once again, despite the princesses going out of their way to be nice and gentle and welcoming, Theo was still not having any of it. 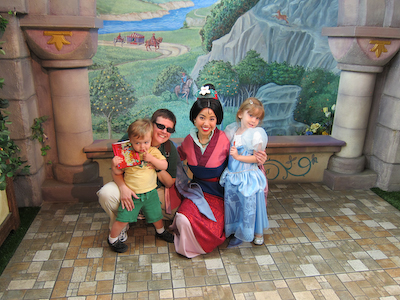 Mom, I got my autograph. Now lemme go.

Finally we got to meet Belle, who is probably my second favorite princess. One of the reasons why I like Belle is because she doesn’t wear pink. Another reason is because she likes reading books. I can relate to that. And when the furniture starts talking to her, she is startled for a moment but then a catchy song happens and she just goes with the flow. I would like to think that if my furniture and dinnerware started a musical kick-line inviting me to be their guest, I’d just go with it myself.

Plus I love French food.

By the time we got to Belle, Theo seemed to understand that the princesses were not, in fact, there to put braids and ribbons in his hair or make him wear the ball gown that inevitably gets duplicated at costume parties because there really is only one way to dress as Sleeping Beauty and that’s it.

For that reason, Theo was more willing to go up and get his book signed. 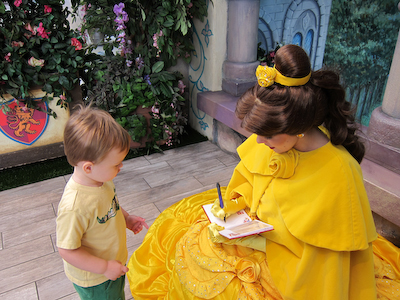 You're less threatening than the other two. Maybe it's the lack of pink.

And then we got one final group shot. Katie really has the princess thing down. 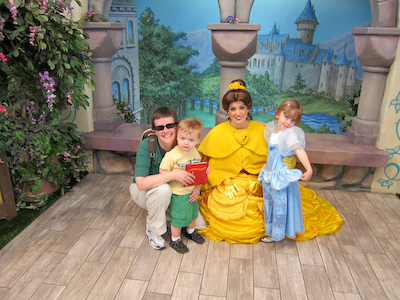 Coming out of the Fantasy Faire, there’s the Troubadour Tavern. I was excited up until I realized that they didn’t serve beer. What kind of tavern doesn’t sell beer? They shouldn’t even call it a tavern if they’re not going to sell beer.

So, the Princess Fantasy Faire. I think if you have a little girl who is into princesses, this is likely unavoidable unless you can somehow talk them out of wanting to be there. But if we’d waited a really long time, it would have been a massive letdown.

And don’t forget about my GIVEAWAY!!!!! Become my friend on Facebook and enter to win a free pair of mouse ears! I may even buy you pink princess mouse ears if you ask nicely! If you don’t friend me, I shall be forced to use more exclamation points!!!!!! And nobody wants that!!!!!!!!!!!