Every time someone says Soarin’ without the California part, small blood vessels explode in my brain that, over the long term, might cause some real problems for me. Yes, I know that’s actually the name of the ride in Florida, but I can’t help it.

Let’s just get on with the post, shall we?

Okay, Soarin’ Over California was the first ride the mom friends decided to do after our dinner. 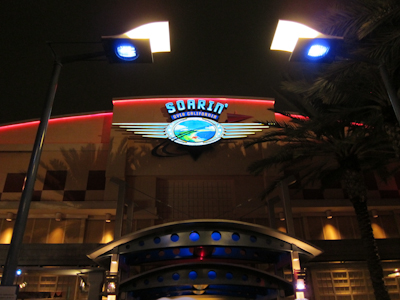 Notice the part where it says "Over California" underneath "Soarin'." I know it's tiny, but it's there. Trust me.

Soarin’ Over California is basically a ride where you sit on a seat and are dangled in the air, and then they show a movie on a hugely ginormous screen of various place in California from the air and your seat moves around like you’re actually flying over the Golden Gate Bridge or Yosemite or whatever.

First, you queue up outside and zig-zag for a while. This is also where we met Janine and Brianne. 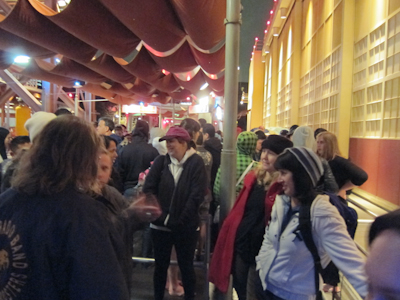 It started to drizzle a little

Once you get inside, it’s pretty cool. The building is supposed to be like a big airplane hanger, and they give you lots of interesting things to look at.

The first time I saw this sign I thought it said "Wings of Flame" and I was like oh, famous plane crashes? Tacky.

There are banners with seminal moments in aviation as well as pictures lining the walls.

As an aside, I took the following picture because there was an adult in the line with a full face-paint job. Face painting is popular and expensive, and very very rare on an adult. I tried to hide the fact that I was trying to get a picture of the face paint guy by pretending to take a picture of my friends. Sadly, my aim wasn’t all that great and I just ended up with a picture of my friends.

Lesson learned--when you're trying to take a picture of someone, make sure they're actually in the picture

Kristin nearly got us kicked out by flashing a gang sign.

At the end of the Wings of Flame part, you get funneled into either Concourse 1 or Concourse 2. The flashing sign cycles through the various airports in California.

I've actually flown out of the Palm Springs airport before. It's quite nice.

We were on Concourse 1. Shhhhhhhh–it’s the same ride either way.

Once again, I'd like to take the opportunity to point out the "Over California" part under "Soarin'"

The cast member is here in case you get lost

You then sit down in your designated row

SIT DOWN, CARISSA! YOUR BUTT IS BLOCKING MY PICTURE!

There’s a simple seatbelt to keep you in your seat. There’s also a loop between your legs and if you’re under a certain height, you thread the seatbelt through the loop. This confused some of us.

I laughed as I realized that, being a big group of moms, we were all leaning over and checking to make sure everyone else’s seatbelts were on properly. You can leave the kids at home, but you’re still going to feel horribly guilty if someone falls off the ride because you didn’t double-check their seatbelt.

Once everyone is belted in, the ride lifts up so that every row is equally facing the screen and you feel like there’s nobody else around you (except for the people whose seatbelt you just checked).

The screen looks like this, but it's much, much bigger

The movie itself is super cool. There are fun effects like when you’re flying over an orange grove, there’s an orange scent, and your seat gently tilts when you’re turning. Your flight ends over Disneyland at night during the holiday season with the fireworks.

And make no mistake–no matter how hard they tried to take the California out of Soarin’ in Florida, you’re still Soarin’ Over California.