Now we head across the Esplanade to the Mouse-Next-Door, officially known as Disney California Adventure Park. The MND was built on what used to be Disneyland’s parking lot, and at its opening, some felt it  was a bit of a disappointment. Now, however, the MND has undergone some big improvements and with the addition of a new land in the summer (Cars Land) and a revamped equivalent of Main Street, among other changes, the MND is set to become as seriously awesome place to go.

The best part, in my opinion which you are all here to read, is Flik’s Fun Fair.

As you can tell, I took these pictures at night

Flik’s Fun Fair, located in “a bug’s land” (and that’s how Disney capitalizes it–I’m not trying to be clever), is basically a kiddie area. Now I know what you’re thinking–isn’t, like, DISNEYLAND a kiddie area? Well, yes and no. Over here in Flik’s Fun Fair, the rides are truly for the 7-and-under crowd.

Which is nice when your kids is under 7.

I also think that Bugs Land has the best, most detailed theming of any area of both parks. I mean, the theme is that you’re a bug and everything else is really big and the whole land is made up of pieces of trash, which are giant because you’re a bug, and…

Anyway, over in Bugs Land is Tuck and Roll’s Drive ‘Em Buggies. 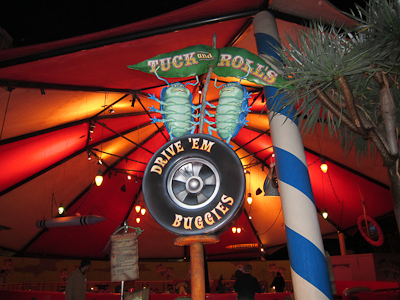 Tuck and Roll’s are bumper cars. They live in a giant circus tent type thing. 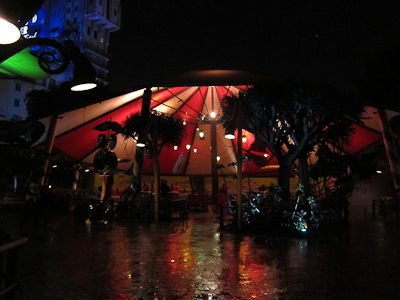 It had rained just a few minutes before, hence the shiny wet ground

Your ride vehicles are little pill bugs, or rollie pollies, or however you want to spell and say those little bugs that roll up into a ball. 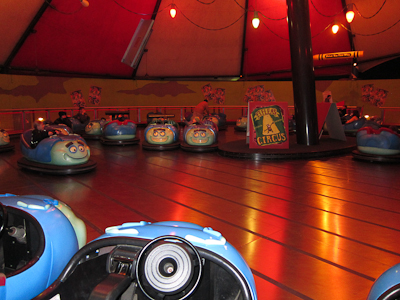 Rollie pollies. Or is it Rolly Pollys?

Now let me just take a moment to talk about bumper cars.

Like, seriously. I’m thinking of the bumper cars that you find at carnivals and stuff. First of all, I hate whiplash. And that’s basically all bumper cars are–to give other people whiplash. Second, I hate being hit from behind when I don’t see it coming. Also whiplash. And thirdly, most bumper cars have that electricity thing going on where there’s like a metal electrical net on the top and the cars each have long sticks that connect to that and get their power from it.

And the sparks and stuff always make me nervous and convinced that I’m going to die if something goes terribly wrong.

Which is NOT a feeling I get on roller coasters, by the way. Go figure.

For one, there’s these giant squishy lap bars that are actually nice and comfortable. 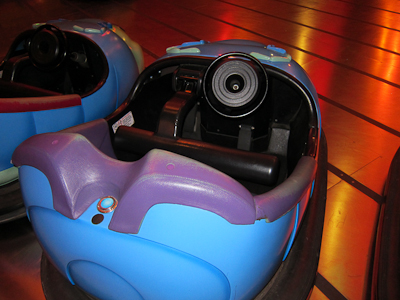 Comfortable if you're three years old

Once you get in them. 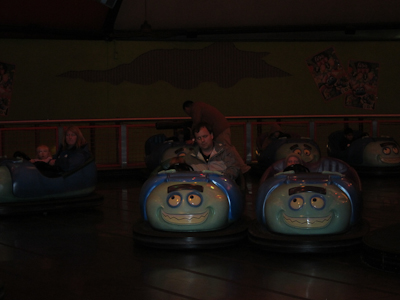 Kevin and Theo picking out their pillbug

And then the best part is the avoidance of something I forgot to mention above, which is this. In regular bumper cars, it’s easy to get all stuck in a corner and be battered mercilessly until your head falls off or whatever.

Disney has solved this with the automatic back-up. If you are stuck somewhere and can’t move forward, simply turn the wheel all the way to one side, and after a few seconds your car automatically backs up and you can then steer it on course.

Which is this way.

To the left, people!

Rather than a free-for-all like most bumper cars, Tuck and Roll’s is a circular arena and the idea is for you to go one way–to the left. There are other helpful signs to guide you. 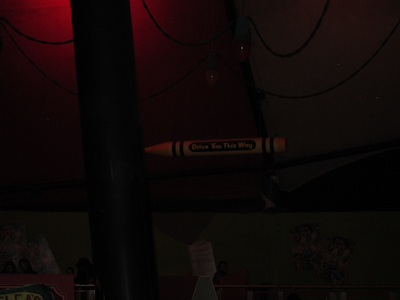 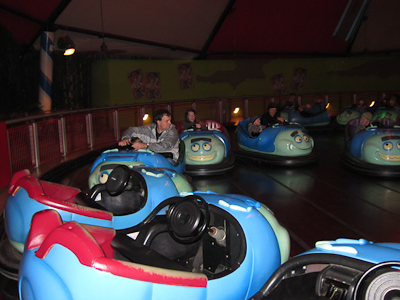 Maybe you’ll even make it all the way around! Or not. Either way, you still have fun.

Theo had fun. But not so much fun that he wanted to go again.