An Ad For Another Theme Park At Disneyland???

Today at the park I witnessed something I have absolutely NEVER seen before. Ever. EVER.

The park was a bit crowded (other people’s spring breaks) so as I was coming around Tomorrowland I couldn’t help but notice pretty much everyone looking at the sky. Being the gullible lemming that I am, I looked at the sky too. There were a bunch of planes doing skywriting.

(Skywriting is, I think, quickly becoming a lost art, but that’s not the point here).

Anyway, it was very difficult to read what they were spelling out. I think their message was too long for one, and also there must have been a bunch of wind up there because the first parts kept smearing before I could get a chance to read them. But here’s what I saw: 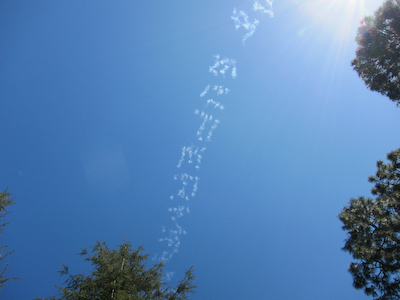 I moved to the Matterhorn to try to get a better picture, but if you’ve been following this blog, you know that my photography skills completely suck, so here’s the view over the Matterhorn: 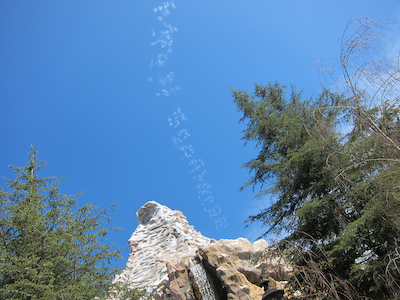 I honestly can't decipher this at all

The message was repeated a couple of times, so I got a shot of the one over Small World: 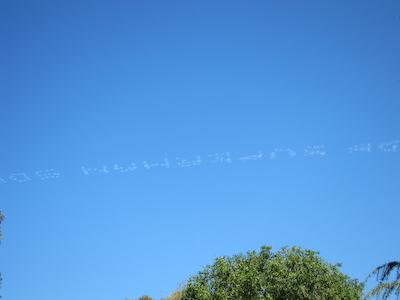 Can you read upside-down?

Here, I’ll flip it for you. And it definitely read RIDE SUPERMAN 5D, and that was repeated a couple of times: 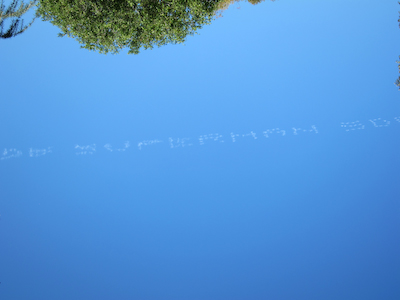 Digital photography is so awesome

But here’s the thing–there is no Superman ride at Disneyland. In fact, the only Superman ride I could think of was at Magic Mountain (in Valencia, CA). And while I couldn’t see the rest of the garbled messages, the RIDE SUPERMAN 5D was very, very clear, and repeated 3 times, which can only mean one thing:

Magic Mountain is advertising its ride in the skies above Disneyland.

Now honestly, I have to say that that’s probably the most ballsy thing I’ve ever seen. I mean, it’s not like Disneyland controls the air or something, but they’re not affiliated with Magic Mountain (which is currently owned by Six Flags again) in any way. I mean, I think the only thing that would have demonstrated bigger cojones would be to fly a blimp over and drop hundreds of leaflets onto Disneyland guests.

And then I had to go home and Google Superman 5D, because the Superman ride has been around for a number of years, and what the hell is 5D? It took some digging, but it looks like they revamped Superman, now called Superman: Escape From Krypton, and it’s scheduled to open this weekend, according to the LA Times.

I’m still not sure about what the 5D thing is (because seriously, how many dimensions do we NEED anyway?) and Magic Mountain doesn’t define it on their site for the new and improved Superman. It strikes me as very odd that they’re doing a media blitz over the skies of Disneyland including the 5D but they aren’t really explaining what it is. I suppose I could do some research to figure it out, but I don’t have the time right now.

Anyway, I sincerely have never seen anything like that before–advertising in the sky over Disneyland. Has anyone else?

(And don’t forget to Like me on Facebook and you could win a pair of mouse ears!)

UPDATE! File this one under “well that makes a LOT more sense!” I’ve recently learned that the part after “Superman” was not, in fact, “5D,” but was rather “SDRAWKCAB” or “BACKWARDS” backwards, because the new version of Superman goes both forward and backwards. And actually in the second picture on this post, you can make out “SDRAWKCAB” in the smeary part. Mystery solved!

6 responses to “An Ad For Another Theme Park At Disneyland???”