Rest In Peace, Robert B. Sherman

The world lost a Disney icon today–Robert B. Sherman who, along with his brother, wrote scores of songs for classic Disney music including Mary Poppins, Chitty Chitty Bang Bang, The Jungle Book, and the Aristocats. He also wrote a song I love–yes, LOVE–It’s A Small World. According to news reports, Mr. Sherman died peacefully at home. He was 87. His music will always be a part of my childhood memories. Thoughts and prayers go out to Mr. Sherman’s friends and family.

To celebrate Mr. Sherman, I’m reprinting my post on the Pearly Band, a wonderful music celebration of Mary Poppins.

So let’s file this one under the “things I never knew existed” category! Theo and I were coming through the castle after the Superman Ad incident, and saw a brightly colored band marching through.

They circled and then lined up in formation. I checked my Entertainment Guide and it made no mention of brightly-colored musicians gathering in front of the castle, so of course in the interest of this blog, I stopped to listen.

I cleverly discerned their name by reading the drum. Because I’m smart like that. 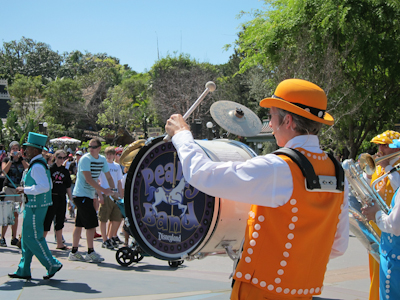 If you’ve been following this blog, you’ll know that 3 minutes on Google is my standard at-home research methodology (if you’re new to the blog, my standard at-home research methodology is 3 minutes on Google), and according to my research, the Pearly band follows the traditions of London’s pearly kings and queens. I have no idea what that’s supposed to mean, since I’ve been to London a couple of times and I have NEVER seen any royalty dressed up like this playing instruments. But, you know, it’s Disneyland, so I’ll go with that. Apparently the “pearly” part refers to the mother-of-pearl buttons on their natty outfits.

When Mary Poppins arrived, it made a LOT more sense. Because there’s a pearly band in Mary Poppins, and apparently Disneyland has had their own Pearly Band since the movie released.

That’s one movie I really should see again, by the way.

Anyway, Mary Poppins immediately came over and started shaking hands with all of the waiting children. 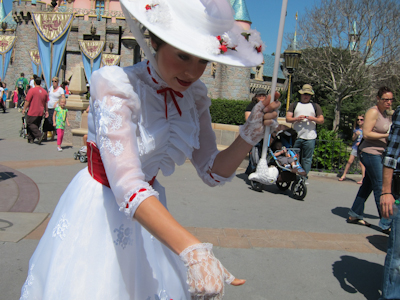 Sadly I was so unprepared for this turn of events that I failed to get into a good position to see Mary Poppins shaking hands with my own child. Instead, in my panic, I ended up with this: 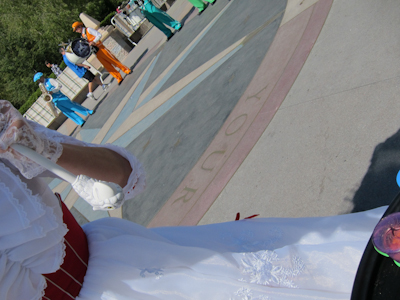 Anyway, when Bert came out with his portable chimney sweep vehicle, I knew we were in for a treat.

After wheeling in his chimney sweeping cart, since apparently 47 Disney years later Bert’s still stuck in an archaic manual labor job, Bert joined with Mary for a jolly holiday. 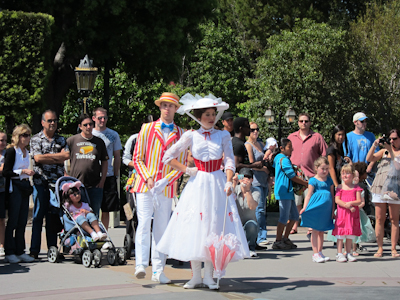 They joined with the Pearly Band leader to sing a song, which I can’t remember because I’m writing this entry a week after the visit to Disneyland took place. Blogger fail. 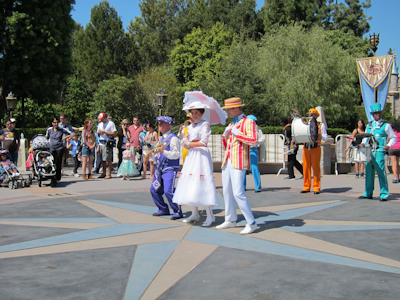 There were more musical numbers, and then Bert revealed that his “trash can” was actually a cleverly-disguised banner holder/retractor, reading Supercalifragilisticexpialidocious. 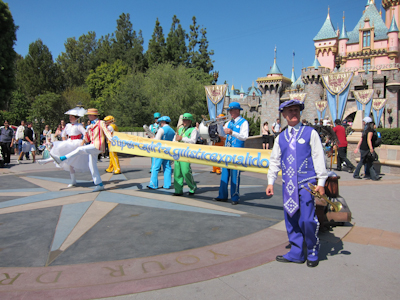 Mary tried to get everyone to sing along, but she thwarted her own efforts by standing in front of the word we were supposed to be singing. Lucky for her, everyone in the crowd seemed to know it anyway. 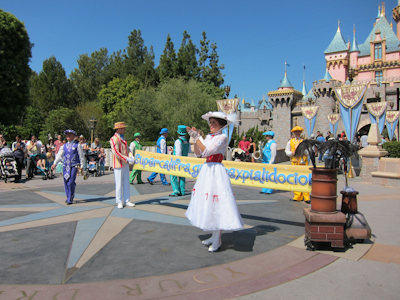 Then the fun went into high gear as Mary and Bert selected a few children from the audience and gave them each a chimney sweeper. 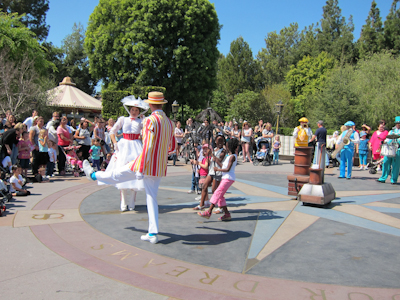 The kids actually did a fabulous job of keeping up with Bert and Mary. 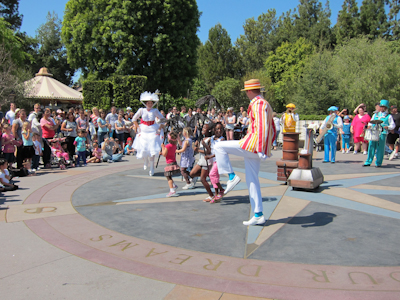 Mary led the children around the Pearly Band as a grand finale. 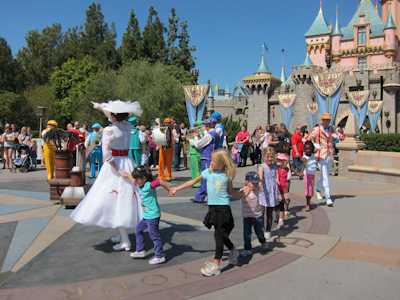 All in all, it was a wonderfully pleasant surprise to happen upon a performance I never even knew existed at Disneyland. I have to say, that’s one thing I’m loving about writing this blog–there’s just so much I never paid attention to!

One response to “Rest In Peace, Robert B. Sherman”