Once upon a time, Disneyland ended at Small World. I mean, the onstage area ended at Small World. And then they put in Toontown. Now let me just be honest here, Toontown is the area I spent the least amount of time in. Partly because it’s all the way in the back of the part and I’m exceedingly lazy, but also because there’s not a lot of shade and it always feels like 15 degrees hotter back there than anywhere else.

And with that ringing endorsement...

The nice thing about Toontown is that it’s kind of like Little Kid Land, and there’s a lot for little kids to do and explore.

I’ve already covered Mickey’s House and Minnie’s House, but did you know that Goofy and Donald live there too?

Fact: Goofy and Donald live there too.

Goofy’s house is conveniently adjacent to a play area, which really comes in handy when you have a toddler who needs to blow off some energy. Like I do. Have a toddler, I mean, not energy to blow off. I wish I did though. 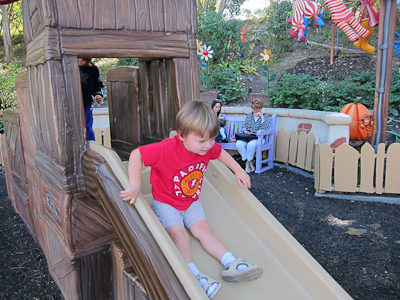 He's a big fan of slides.

Goofy’s house is rather ramshackle, unsurprisingly. 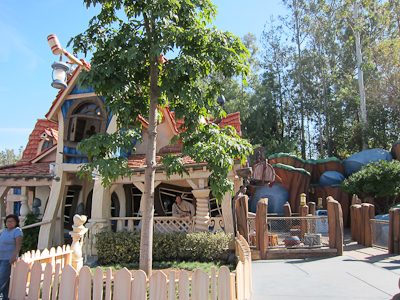 Goofy's house, kind of, behind the tree.

And in case you wonder why I don’t cover more attractions when I’ve got the kid along, it’s because while I was taking the above picture, this happened:

The lesson here is clearly to dress your child in a brightly-colored shirt so that when you are done taking pictures of other things, you can locate him later.

Or just put the camera down and run after him, like I did.

Anyway, Goofy’s house has an entrance onto the play area.

Is that some sort of lighthouse architecture?

And I’ll be honest. While there is some elaborate decorating inside, Goofy’s house was a pretty big disappointment, especially compared to Mickey’s and Minnie’s houses. There’s basically one big room, and if you look up you see this:

I have an intense fear of sharks, but this one does make me laugh.

I was going for an artsy, forced-perspective shot here. Right.

But mostly Goofy’s house is one big room, and not all that populated either. There’s the piano:

Theo did love banging on it

And some sort of wardrobe/cabinet/spinner toy thing: 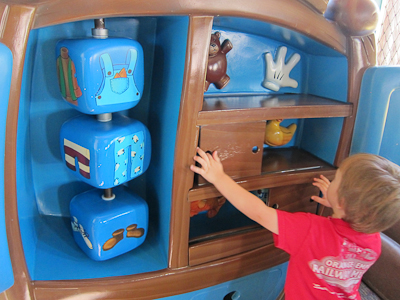 Great and all, but we actually kind of have one of those spinner things at the park across the street, and that's free.

And classic Goofy art on the walls:

While I’m being honest, it’s really kind of underwhelming. Theo did have a good time, and I liked just kicking back and watching him  play, but it wasn’t nearly as good as Mickey’s or Minnie’s house.

Which kind of makes you feel bad for the old Goof. I mean, he’s always kind of getting the short end of the stick. It’s not his fault he’s that tall. Or that he’s some kind of weird talking dog when Pluto gets to be a regular dog. It can’t be easy wearing patched, ill-fitting clothing. Not to mention that hat. But somehow, Goofy pulls it off, so we applaud him.

No idea where he sleeps though. On the floor?

UPDATE: Reader Amber informs me that Goofy’s house used to be a bounce house! I HAD NO IDEA!!! It’s too bad they took the bounce part out. That would be really cool.