Thanks to everyone who participated in the wishing well contest! Last time I used random.org to select my winner but then my friends said they liked my original method better, which was putting everyone’s name on a piece of paper, folding them up, and having Theo draw one out of a hat. It’s not as scientifically fair as random.org, but it does make for a cuter picture, so you will have to wait on the winner until my name-drawer wakes up from his nap.

Also, thanks for hanging in there with MWTM last week–big assignment due for school and the Vegas trip and all, but I’ll be able to devote more time in the coming weeks.

As you may recall from my post about Mickey’s House, Toontown is a little area in the back of the park that houses, among other things, the classic Mickey and Friends characters and the lamest ride in the whole park (Car Toon Spin). Mickey’s House is quite large and culminates in a meet and greet with Mickey. Minnie’s house, on the other hand, is smaller and there’s no meet and greet.

In case there's any confusion about who lives here, Minnie's mailbox clearly identifies the resident

And here’s the house itself. It’s very…pink. 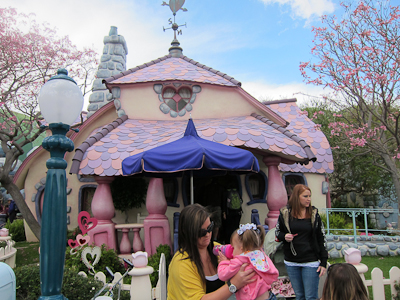 Have you noticed that pink is not my thing?

Anyway, like Mickey’s place, Minnie’s House has a lot of things to sit on.

Minnie also has some sort of…I actually don’t even know what this thing is. It’s got, like, buttons and stuff, or something. Theo was equally confused. 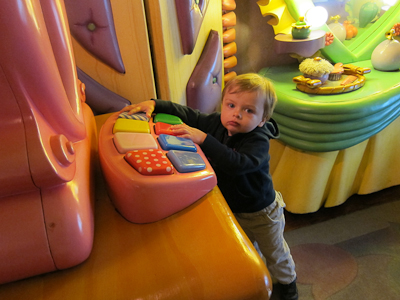 Minnie is also very, very, very into the domestic arts, particularly kitchen-related domestic arts. She’s got a plate of cookies for you, with a weird holographic set of chocolate chip cookies, which you can see at certain angles. 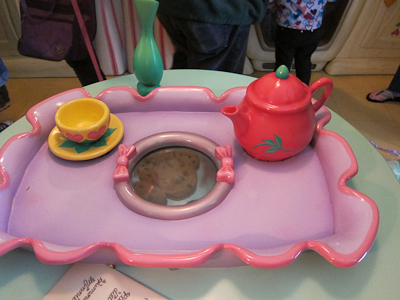 Minnie also has a dishwasher and if you push a button somewhere, the light comes on and water swirls all around and stuff. For some reason, this is like visual crack to small kids and they all sit there glued to it until their parents drag them away. 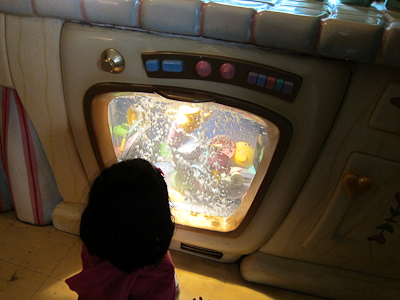 Minnie didn’t just stop with the cookies she was baking. Oh, no. She has a cake too. The cake is in the oven, and when you push a button on the oven, it lights up and the cake slowly inflates, like it’s supposed to be rising and all or something? But then it deflates when its little cycle is over, like a bad souffle.  I think it’s supposed to represent a cake rising and becoming a fully-frosted cake inside the oven but really it makes it look like cake is some sort of weird balloon you really wouldn’t want to eat.

A fully-frosted cake with candles inside the over. Minnie has got some mad baking skillz, I tell you.

Minnie’s house also has lots of things to pull and push and play with. In her kitchen, she’s got a refrigerator that opens, and then small children like to climb inside. No, not my small child. He was still mesmerized by the dishwasher.

It's time to defrost the freezer, Minnie. You'd think Disneyland could have sprung for a frost-free one.

And of course, outside, there’s the now-famous wishing well, where Minnie talks to you like she’s inside there or something.

Lassie, get help! Minnie's in the well!

Minnie’s House was cute, but was much more crowded than Mickey’s House and seriously, Minnie drowning in a well is not quite the climatic ending that Mickey’s Movie Barn was. All in all I found it a bit disappointing, though my pink and purple heart quota was more than met for the day.