Once upon a time, over in Tomorrowland, there was this attraction called Circle-Vision. True to its name, it was this big round building and you stood in the middle and all around you in 360 degrees they showed a movie. The one I remember was all about America and you were speeding around on vehicles and whatnot.

It was horrible. I threw up.

Not inside the the attraction, but outside. I’m very sensitive to motion sickness. Even Star Tours makes me queasy.

So when Disneyland closed Circle-Vision and later turned the space into Buzz Lightyear Astro Blasters, I was positively thrilled. The Mouse-in-law still has Circle-Vision in Epcot. I can’t do it. I just can’t.

Buzz Lightyear is cool because you sit in your car and ride through rooms (like a regular dark ride), but you get a blaster gun and you get to shoot stuff. What’s there not to love about that?

Well, it’s just not all that popular anymore. They had a FastPass for it, and then that became effectively useless because the stand-by wait was generally about 20 minutes anyway (on non-crowded days).

They have finally given up the charade and are using the FastPasses for the new Star Tours refurb. This is probably a good idea.

Your primary queue is outside around the building. 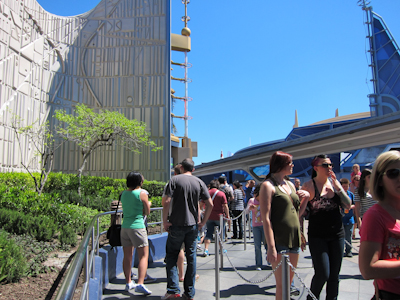 Also, you can see greenery on the left there. They actually grow real things, like strawberries. People really do pick them and eat them.

Why would you eat something that grew next to the queue of a Disneyland ride? WHY???

I’m not sure if those were strawberries or not, but still, I wouldn’t eat them.

Inside the actual building, the theming is immersive and fabulous.

There are lots of things to read, like this

Unfortunately, when the wait is short, you have to zoom by them and don’t really get the full experience. It’s like waiting in line for the Mona Lisa, and then you finally get to the front, take your one picture (if it doesn’t bounce off the glass box) and leave. I have to say, the Mona Lisa was definitely one of the most anticlimactic things I’ve ever seen. I suppose if I were able to study it or even get close to it, I would have felt differently, but there are plenty of other pieces of art in the Louvre to spend your time looking at.

Anyway, you are quickly introduced to your enemy, the Evil Emperor Zurg. 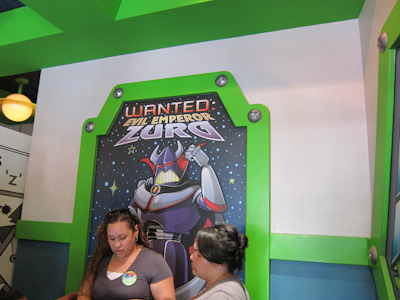 And in the next panel, you are told what you are supposed to do, which is to find these targets throughout the ride and hit them with your laser. 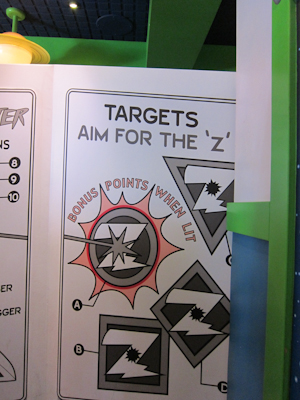 You're supposed to aim for the middle of the Z, but in case you didn't pick that up, there are handy little lines on every shape showing you where to shoot

Should you spend your time just hitting as many circles as you can, or patiently wait for the triangles and diamonds and shoot those even though you’re losing time? I really don’t know. I totally suck at this game.

Then you hit the cool part of the line, which is the debriefing room. Buzz himself is there, larger than life (wasn’t he like really short in the movies? Shorter than Woody?), and his face is a hologram giving you more instructions. 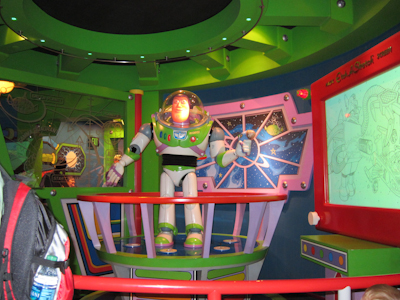 Awesome to look at, difficult to photograph

The Etch-A-Sketch also draws pictures that are supposed to be helpful but really are just an Etch-A-Sketch drawing pictures by itself. Which when you think about it out of context, is really creepy. I mean, it’s like an Etch-A-Sketch ouija board or something, but unlike a ouija board, it would be really obvious if someone was moving it (OMG, nobody is touching the knobs!!!). I’d hate to be in a horror movie with this thing.

This is the dude you're supposed to shoot

Then finally you board your Space Cruise XP-40.

Moving sidewalks to get on a ride ALWAYS make me nervous

Theo stayed like this pretty much the whole ride

Once you get into the dark part of the ride, that’s when you shoot things. 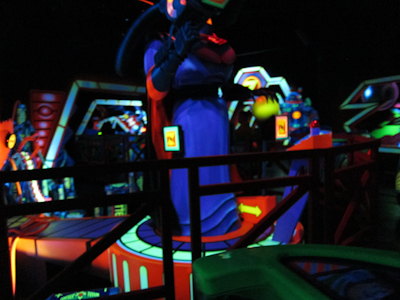 As you can see (or as you could see if I were a decent photographer), there’s a couple of moderately-easy square targets and a difficult triange behind Zurg’s arm. It’s difficult because it can only be hit from a certain angle, and Zurg’s arm goes up and down, periodically blocking it.

Here’s a better picture of something you’re supposed to shoot.

He has a diamond on the side of his arm because you have to turn your car around to shoot it and also it moves.

You meet Zurg again, but he’s got something up his sleeve this time. No, it’s not shootable. They take a picture of you. At the end of the ride, Buzz himself steps in and zaps Zurg, because I guess you’ve been doing a crappy job. I mean, Zurg does appear twice, so if you didn’t neutralize him the first time, it’s probably time to call in the big guns. 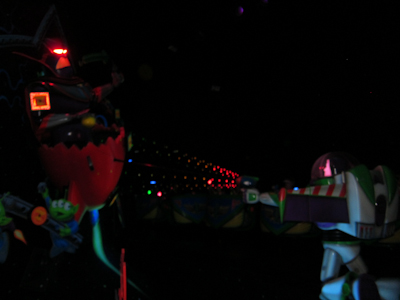 I AM AN AWESOME PHOTOGRAPHER!

After all of that, you get a tally of your score. Mine was a bit problematic because 1) Theo kept turning the car every which way according to his whim SQUIRREL! 2) I was holding the camera in my right hand, which is my dominant hand, and 3) I was attempting to shoot with my left hand but it’s important to know that my left hand is so unadept it’s really just there for decoration.

Oh, also, the one thing I don’t like about this ride is that you can’t really see where you’re shooting. The pictures all show these laser beams coming out of the blasters, but in reality, you just have a little red dot that shows up when you pull the trigger. The other problem with that is that you see everyone else’s red dots too, so if you’re me and lousy at the game, it’s very difficult to know which dot is yours, making it difficult to aim.

Still, despite all of that, I managed to make Level 3 with my results

Level 3? Are you serious? I think even Theo can get to Level 3!

Once you step out of the car and onto the nervewracking moving sidewalk, you are funneled out through a separate exit. On the way, there are screens where you can go up, find your picture, and email it to yourself. For free! One of the few things in the park that are actually free.

You also have to scroll through a big bunch of pictures to find yourself. Some people are more successful at this than others. 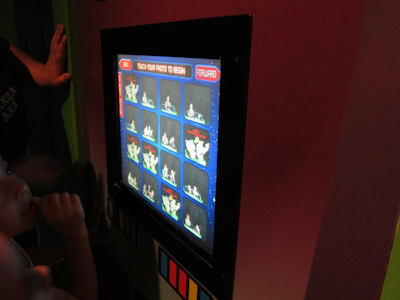 I generally skip this step because it takes a long time, but I was going to try to do it for the blog. Alas, it was not to be. Theo was in a rotten mood and actually kept throwing himself on the floor crying, so I had to carry him throughout the entire queue. This kid weighs approximately 7,000 pounds, and by 7,000 pounds I mean 33 pounds, so he’s very heavy.

While waiting for our turn at the screen, Theo once again launched into his schtick. Let’s just say that he would make the ideal non-violent protester, as his skills at going completely limp are truly unparalleled.

The only reason I didn't take a picture of his face was because he will probably see this when he's older and will be horribly embarrassed. You're welcome.

Disneyland likes to make you exit through a gift shop as often as possible, so Buzz is no exception. The good news is that there’s another passage out of there. 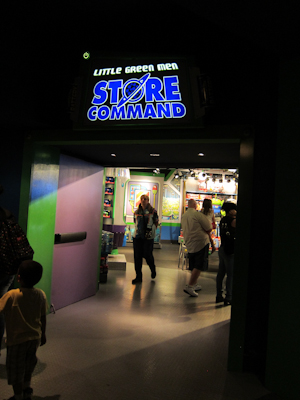 Now I like Buzz. I really do. But he is nothing compared to Toy Story Mania over in D-CAP. I may have to cover that one for you because of its sheer awesomeness.