So it should come as no surprise that I’ve been going to Disneyland with some degree of frequency this year. The vast majority of the time I’ve taken Theo. And having done that so many times, I’ve more or less developed a system of what I bring.

And you, lucky readers, are going to hear all about it.

Now most of the time we go for short periods–3 hours or less, so I keep my bring-alongs to a minimum, but I’ll address longer visits at the end.

So here you go–Disneyland Essentials for a 2-year-old.

1) Stroller. I love my stroller. It’s a Baby Jogger City Mini and if I could marry one baby item, it would be my City Mini. There are only a couple of very small things I’m not fond of, and the updated version fixes some of them, but for the price, it’s all kinds of awesome. And incidentally, the Disneyland rental strollers are a stripped-down version of the City Mini, so it gets the official thumbs-up from Disneyland too.

2) Parent console. The City Mini does not come with a parent console, but they will generously sell you one for $29.95. Or you can get a generic Sunshine Kids one for $9.98 that works amazingly well. Here’s my stroller console: 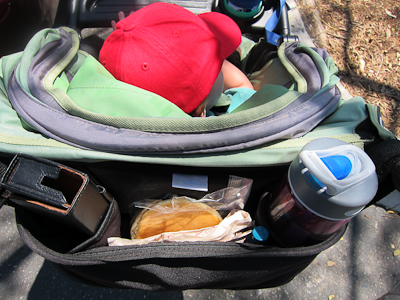 And what’s IN my parent console? Good question! Uh-oh, it just occurred to me that I was using a numbered list (or in technical writing terms, an ordered list, but I have turned my back on that aspect of my past–farewell, technical writing!) for the above part and now I need another one. So I’m going to use letters. Because letters are nice like that.

A) Refillable water bottle. I have to say that this is my #1 essential item for Disneyland. If you bring nothing else, bring a water bottle. It doesn’t have to be all shiny and pretty and BPA-free, but for the love of God, water is free in the park. FREE! Do you know how many free things there are in the park? Not very many!! So take advantage of as many freebies as possible. Like water.

B) Chapstick. It’s the little green thing next to the water bottle. Chapstick with some SPF is preferable.

C) Snack for the kid. In this case these are leftover pancakes from breakfast. Not with syrup or anything–I’m not crazy. Pancakes with applesauce. And yes, Theo ate the breakfast portion about an hour before I gave him these, but waste not, want not!

D) Camera case, with or without camera. Now this one gets a little bit tricky. Since I’m constantly taking pictures, I keep my camera here where I can grab it easily. BUT, you have to remember to take it out of the console every time you leave the stroller. If you’re a forgetful kind of person, then don’t put your camera here. Also, if you have another person with you, the $10 Sunshine Kids console has another cup holder, just perfect for your second refillable water bottle.

E) Extra napkins. Once again, something you can get for FREE! FREE!! FREE!!! Now I’m really of the mindset that you can’t have too many napkins. I mean, you CAN, so let’s not go overboard here, but in general, it never hurts to have a few extra napkins handy. Especially if you’ve gotten food and didn’t end up using them–don’t throw away those clean napkins! A tree cries every time you throw away a perfectly good napkin! Anyway, napkins come in extremely handy, so keep them handy. Hey, that’s kind of catchy!

Oh and a tangential but somewhat related story–in my family, we are in the habit of keeping extra napkins in the glove compartment of the car. In my dad’s car, the napkins almost explode out of the compartment when you open it. Kevin was mocking me for developing the same habit until one day, he had to make a sudden stop and a soda with a loose lid flew into the dashboard. And guess who had all kinds of napkins handy for instant cleanup? That’s right! Me! WHO’S LAUGHING NOW, BUDDY? Although there was payback since I was kind of mocking him for carrying a fire extinguisher around in his trunk and then this one time he actually used it to put out a fire on someone else’s car. So no more mocking.

Okay, did we cover the console? Yes. Now we have:

This netting has gotten kind of saggy

I) Autograph book with pen. The autograph book came with this little dinky pen and when Goofy was trying to use it (successfully, much to my amazement) I felt really bad, so I stuck in my own regular-sized pen. I’ve also heard it’s a good idea to put in one of those clicky Sharpies for maximum character ease, but honestly I haven’t really gotten around to it yet.

In the basket we have: 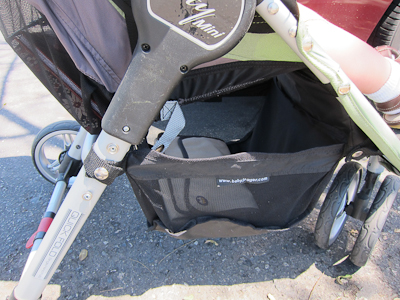 A mini diaper bag, containing a couple of diapers and wipes. If your child is no longer in diapers, this is optional. Also, this mini bag pretty much lives in the stroller basket. Next to the extra napkins.

A cute child. Or an ugly one, if that's all you have on hand.

If your child will wear a hat, bring that. It’s really helpful. However, if your child is like mine, the hat is pretty temporary. It’s always worth a try though.

Because kids get dehydrated too!

Child’s water bottle. I can’t think of anything else to say about that.

Sure, buddy, throw that water bottle as far as you want

The Sippi Grip attaches to your water bottle and your stroller and if your child is prone to tossing water bottles in a fit of pique like mine is, it’s very handy.

My calves aren't actually this big. I swear.

Tennis shoes. There’s some debate on this subject, but I still maintain that a good, supportive set of athletic shoes is your best footwear for the park. Particularly if you need arch support. I’m not going to argue this point except to say that the worst footwear option is Crocs clogs. Well, actually the worst footwear option is high heels, but Crocs are a close second. Not only because they are a fashion horror show, but because when they get wet, they really chafe. I can’t even tell you  how many kids I see walking around with bleeding blisters from Crocs. Gross. And also, ouch.

So since I pretty much abandoned my numbering scheme up there, I’ll wrap it all up here for you.

3) Kid tray if your stroller doesn’t already have one (I know, I just snuck that one in there)

16) Car key, money, park tickets. I carry these in a small backpack/purse but you can put them somewhere else convenient.

I usually put sunscreen on at home if we’re only taking a short trip, but if you’ll be there all day, add these items:

So there you go–my minimal essentials for toddlers at Disneyland.

And because these pictures were boring, I’m going to add some gratuitous cuteness.

Have you no shame, Shelby? Nope.

ADDING TO ORIGINAL POST: I had originally intended this post to just be a list of items that I bring with me for my situation (Disneyland, not the Mouse-in-Law, and a child who is too young to leave my side) rather than general tips for bringing kids to Disneyland. I could write a tip post if people are interested? Also, there are some GREAT tips from readers in the comments below. Thanks for sharing!! And feel free to add your own tips in the comments too!

And I forgot to add that I use a small backpack as my purse and that’s where I keep my credit cards, pass, etc. so I added that.

Everything Else Disney essentials, toddlers at Disney, what to bring to Disney
← Giveaway Winner! Shelby’s Guide To…Getting Into the Park →