It’s that time again. For the newbies, the phrases in bold are search terms that people used to find and click on my blog.

how much are pillow pets at disneyland

A bit pricey, IMO, but a reader reports that they are softer and nicer than the ones at Wal-Mart 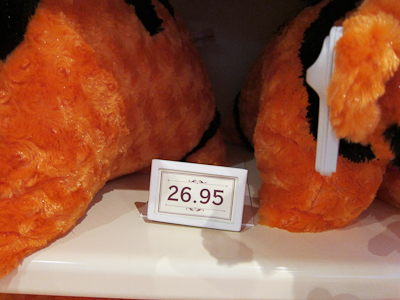 The price of pillow pets

Oh that pesky “D” key, right next to the “S” key! And this is Disneyland, but here’s my advice.

If you’re looking for scary, Disneyland is not your place, unless you’re riding Snow White’s Scary Adventure (which lives up to its name) or Pinocchio’s Daring Journey (which is sneaky with its scary, since you don’t realize it’s scary until you reach the seriously creepy jack in the box clown dude, and then it’s all downhill from there). And here’s the Halloween parade floats.

which do people like better pillowpets or those other things

Well I don’t know about you, but I like those other things better.

going to disney with in laws, not excited

My condolences. I really lucked out when I got married because my in-laws are great people. Not annoying at all! Plus they live close-by and babysit frequently, so that’s cool. But here’s my in-law advice (oh, and when people say “Disney” they usually mean Disney World, but it’s my blog so I’m going to talk about Disneyland)–one, develop a mystery condition that requires you to take frequent “naps” during which you can go to the other park (CA Adventure if you’re in Disneyland or Disneyland if you’re in CA Adventure). Two, Profess loudly that you’re not leaving the property until you ride [whatever] 20 times, with [whatever] being either the ride they hate or the one they can’t go on (it’s not necessary to actually ride this ride). Three, CA Adventure has alcohol, if you’re into that.

what will become of aladdin’s bazaar in disneyland

I just love this phrasing. “What will become…” It’s so Victorian or something. Well, the bazaar is a store and I think that’s pretty much staying, but the meet and greet is the former Tahitian Terrace, then Aladdin dinner experience (not its real name) and now it’s just taking up space looking like it would be a great place for a dinner show (which it would). Although actually, there’s a fundraiser where for some large amount of money you can eat at the Tahitian Terrace with a private show for One! Night! Only!, but I don’t have that kind of cash. And to answer the question, Disney hasn’t made any announcements as far as what they want to do with the space.

Awww. Although I kind of get the feeling they’re not looking for me.

tower of terror my year with the mouse

Haven’t done it yet. And I’ll admit it scares the crap out of my and my touchy stomach, so when I do finally blog this ride, y’all better appreciate my sacrifice.

Any emporiums? I don’t know.

He’s not in the ride.

Sadly, ’tis no more. It was renamed Critter Country. But you can find it on Yesterland.

You are aware you clicked on a Disneyland blog?

Aisle 9. Your location may vary.

how long are the churros in disneyland

Interesting question! Remind me to measure one next time I go.