No, this post isn’t about Alice in Wonderland. I’m actually straying from Disneyland to post about Theo’s half-birthday party. Why? Because it’s my blog and I can. Plus a large amount of time this week was spent preparing for it. Wednesday was my birthday and no, I didn’t go to Disneyland because my pass was blocked out, sadly, but it did give me extra time to prepare for today.

Theo’s actual birthday is Christmas Eve–the best Christmas present I’ve ever gotten! However, it’s not an ideal day for a birthday, so we do a half-birthday party in June and a family-only low-key thing in December. So this year I decided to do a storybook theme. That’s right, not Disneyland or Disney or even remotely Disney, just Theo’s favorite books. Why? Because it’s my blog and I can. Also, there’s way too much Disney stuff out there and I’d like to try to avoid Disney-themed parties as long as possible.

Yes, I do get the irony on a Disneyland blog.

Anyway, so Theo’s favorite books are Where the Wild Things Are, The Very Hungry Caterpillar, Mouse Paint, and Freight Train. Well he’s got others (like Go Dog Go!) but those are the ones I did for the party. I also had a very special party favor–a friend of mine happens to be the author of another great book, Library Lion, so I bought a bunch of copies of those and had her autograph them for the kids, thus solidifying this as the Coolest Party Favor Ever (or at least until Theo’s 16th birthday, where everyone gets a car).

I started with Where the Wild Things Are party invitations.

I had some other vague plans for incorporating more WtWTA aspects, but they didn’t pan out. Oh well.

For food, I went with the Very Hungry Caterpillar, of course. The pièce de résistance of the party was the cupcake caterpillar. Now, I’d seen pictures of this cupcake creation online and thought “how hard can it be?” And as it turns out, not really hard, just very, very time consuming. Here’s the finished product.

but he was STILL hungry!

I have to say, I’m remarkably proud of myself. And this took 4 and a half hours to make (including the baking and cooling time). I really feel like I deserve some kind of special award or extra credit or gold star for that, but unfortunately none was forthcoming, so instead I walked around the party saying incessantly “Did you see my caterpillar? It took me 4 and a half hours!”

Everyone nodded, either with appreciation or appeasement.

I don’t exactly have a background in cake decorating. In fact, before making the cupcakes I decided to go out and buy some real decorating bags and a tip. My college roommate Mary was in town so I dragged her out and we had no idea what we were looking for. I mean, we pretty much randomly just picked a decorating tip. But it turned out okay. The fondant I bought pre-made and I’m particularly proud of the caterpillar’s head. 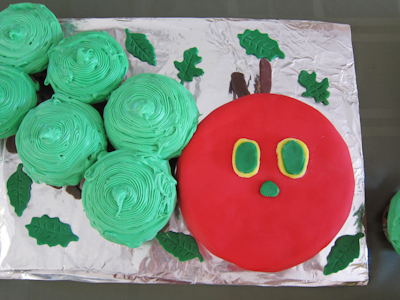 Did you hear? This took me 4 and a half hours!

As a special added touch, I used the rest of the green fondant and cut out leaf shapes with a cookie cutter, then carved the details with a butter knife. See what I mean about deserving a gold star?

Next year we’re getting an ice cream cake.

I also followed the book for the fruit spread. Because the cake took so long (4 and 1/2 hours!), I didn’t have time to cut the fruit, so my mom and Theo’s honorary grandma did all the fruit cutting for me. Which is basically like, come to my party and do my work for me. And enjoy yourself when you’re done. And here, have a glass of wine, which you brought.

Apples, pears, plums, strawberries, and oranges, but he was STILL hungry!

(we did provide our own wine, beer, and other unimportant beverages)

I did a little setup for our two games, and by “I” I mean my dad and Theo’s honorary grandpa. Again with the hostessing. Anyway, the guests started arriving. We have a tragic lack of toys in our house, so the children were bored to tears with nothing to play with.

That’s Anderson of Jedi Training Academy fame, by the way.

Our porch railing self-destructed at our last party (I know, you are seriously dying to come over now) so Kevin spent the week rebuilding it, only to find at every step that the damage underneath was much more than expected. Much like my fruit cutting, Kevin also ran out of time on the stair rails. And he has a much better excuse than spending 4 and 1/2 hours on a cake–he was actually working and making money. Anyway, we decided to just tell everyone to be careful on the stairs and have them sign a waiver coming in.

Turns out that the stairs were like the highlight of the party.

The half-birthday boy clings to Mommy for his dear life

Phoebe was getting awfully close to the edge, but her parents aren’t the type of people to sue, so I just took a picture instead. 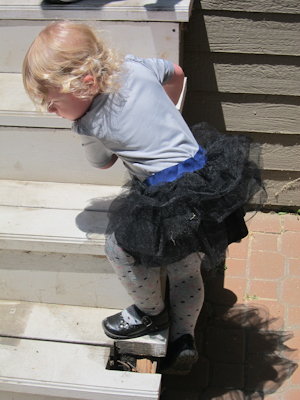 I love tutus, but Theo won't stand for them. Or sit either. 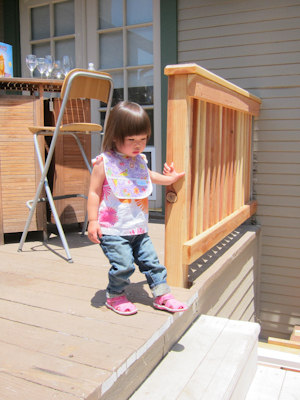 I mean she really, really liked the stairs. 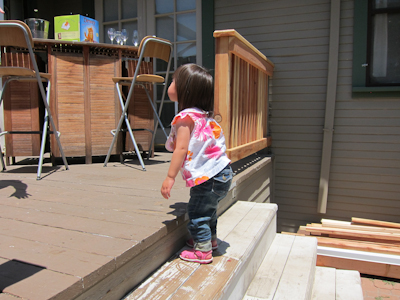 No, I didn’t make them sign a waiver. But only because I didn’t think of it until after the whole party was over.

Theo is very lucky to be surrounded by grandparents and great-grandparents. Here’s Kevin’s side.

Wesley was our youngest guest, so we had to get a close-up.

It was hotter than expected, but people made due in the shade. Also, more grandparents. 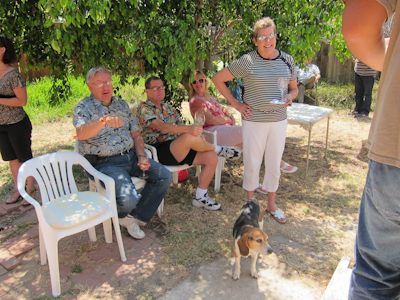 We decided to round the kids up for our first game. It was a very cute setup that unfortunately I didn’t really get any pictures of, which kind of bites. This was a very short and straightforward obstacle course based on the book Freight Train. In the book, the train runs across the tracks and goes in and out of tunnels, in darkness and light, etc. I narrowed it down to in and out of tunnels, past a city, and over a trestle. I also scanned pictures from the book and stuck them to the side of the house with masking tape. And believe it or not, I actually did that part MYSELF.

Anyway, we lined the kids up to navigate the course. Both elements.

Viktor, Annika, Anderson, and Theo are ready to be freight trains.

Now at this point, Theo and Phoebe had a toy-hogging thing going on, and by toy-hogging I mean Theo being a toy hog. Usually they play well together, but anyway, when we lined up for  freight train, Phoebe took the opportunity to grab the bug collecting box from Theo and then refused to give it back. Tears were involved. 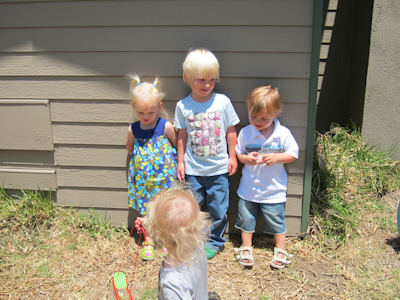 Phoebe goes for the getaway with the toy

I’m not really sure where Vivienne was. I think she kind of flipped out or something. And I say that in a loving way. Anyway, the kids carefully traversed the course. 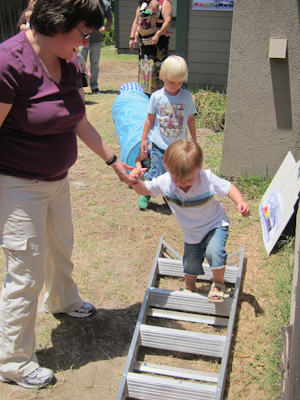 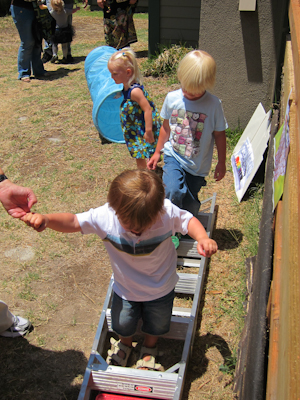 Anderson was not far behind

Viktor did a great job

We even had Wesley give it a shot in an attempt to entice Phoebe back into playing.

Phoebe was not impressed

After the party I realized I hadn’t taken pictures of the setup. Kevin had already taken them down, so I made him go back to the recycling bin and pull out my city scene for a picture. Unfortunately it had sustained a slight tear, which Kevin fixed with masking tape. 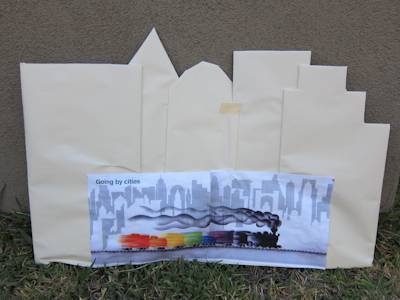 I'm very proud of myself, but not as proud as I am about the cake

Then we got everyone into painting smocks for the next game. These are Daddy’s old t-shirts. 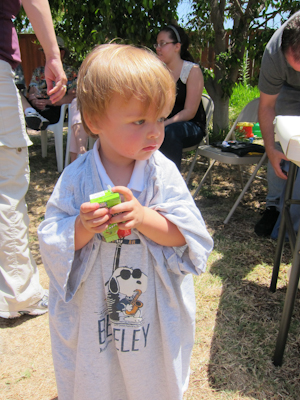 Theo was extremely concerned about his juice box

The next game was based on Mouse Paint. If you haven’t read the book, it’s about these three little mice who find three jars of paint in primary colors and dip themselves in them. Then they do little dances among the other puddles to make secondary colors, like red feet in a yellow puddle make orange!

I scanned and printed out some pages from Mouse Paint, then covered a box in butcher paper and put it in the center of the table.

There are books inside the box to keep it weighted down 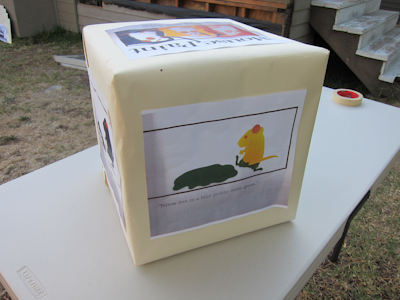 This book is so cute, you really have to read it

I decided we would do some general fingerpainting.

Covered the table in plastic and butcher paper and just went for it.

For paint, I used vanilla pudding and food coloring. It actually worked really well, except since the pudding was a bit yellowish, I had to add an inordinate amount of blue dye to the blue bowl.

Some of the kids got the idea better than others.

However, Theo, on the end, could not possibly be less interested.

This stuff is weird

Phoebe made some great art

With a little help from her Daddy

And honestly, I think the difference between being 2 and 1/2 and 4 are pretty huge as far as understanding this kind of activity.

That handprint is actually really awesome

And speaking of the difference between a 4 year old and anyone, Vivienne (who is almost exactly 1 year younger than Theo) was a bit confused. 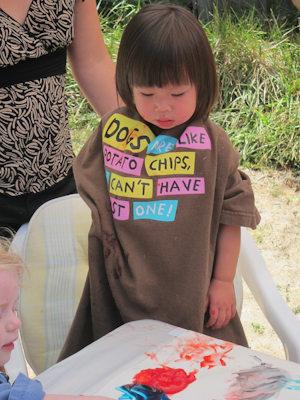 This shirt is way too big for me.

Or maybe age has nothing to do with it, given that Phoebe is  couple months younger than Theo.

Anderson was proud to show off his handiwork. Get it? HANDiwork? Ha ha ha.

Get out the hose

While waiting for the pizza to be delivered, Carissa took the opportunity to hold an alcoholic beverage in each hand. I think maybe having a baby is more difficult than I remember.

More chitchat with a couple of my favorite teens.

Theo only had eyes for the cake. 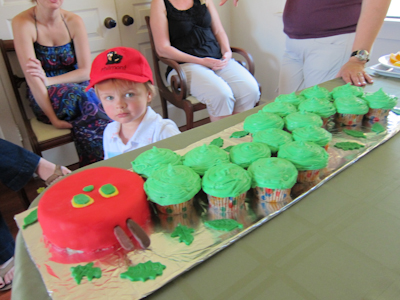 Can we eat it yet?

And here’s a  photo montage of Theo Meets Cupcake. 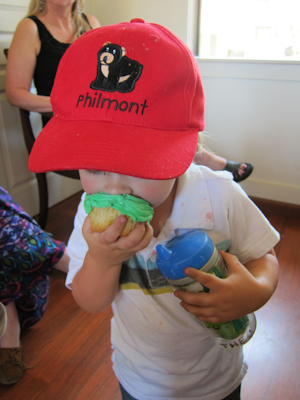 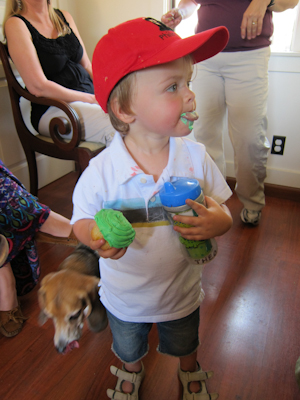 Viktor, on the other hand, was significantly more civilized.

All in all, I think Theo got 2 and 1/2 cupcakes, which has a nice sort of feel for this party.

And that was our successful party! Everyone seemed to have a good time and it was fun having people over and making them do my party prep for me. But all in all, we were thankful to everyone who came to celebrate with us!

27 responses to “A Very Merry Unbirthday”