I write “it’s a small world” in quotes and lower case letters because the Disneyland site does. I think maybe the lower case letters are supposed to convey the smallness of the world, or at least the world inside the quotes. I don’t know. Anyway, I really think Small World (I’m bucking convention here) gets a bad rap. Yes, the song is repetitive, but inside the ride they sing it in several different languages. And when they did the refurb they really spruced up all of the dolls. I think the ride is fantastic, and if you have little kids, it’s awesome with them.

I already wrote about the holiday Small World so I’ll just sum up briefly here. Small World opened at Disneyland in 1966, a time when the average Disneyland guest weighed  lot less than they do today. Yes, that’s significant. Because as the guests got heavier, the boats sunk lower in the water, and the “river” was powered only by water current. Your boat would frequently get stuck. They closed the ride for a complete refurb and while it was closed they added some Disney and Pixar characters to the scenes. At first I thought this was going to be a total nightmare, but I actually think they did it well.

The clock face outside of Small World is totally famous. 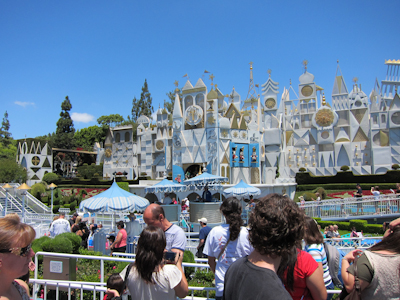 Every 15 minutes, it turns into the world’s largest cuckoo clock (not a fact, I’m just speaking off the cuff. I’m sure there’s a larger cuckoo clock somewhere in Germany) and little dolls from different countries come out and circle by. 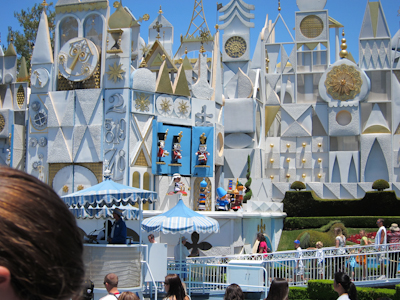 Now there are two lines for Small World boats. One is physically shorter than the other, and I used to think that one was faster, but in fact that one is the handicap-accessible line so the boats often slow down to help people who need extra time boarding. So the one closest to the clock face is the fastest one usually. 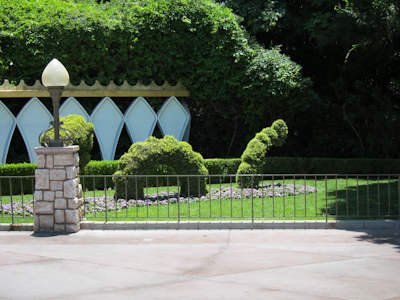 Here’s a pretty good picture of the boats and loading area. 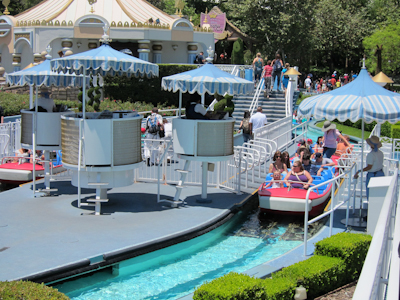 You’ll notice in the trough there’s a groove down the middle. The boats are no longer carried entirely by water current anymore. They can get a helping hand every once in a while.

Now I want to make it clear that Theo really likes this ride. He has been on it a number of times and completely enjoyed it. So it was really baffling when we got to the boat loading dock and he completely lost it. We were going to put him and Anderson and Annika together in the row ahead of us, but when I tried to get him in, he started kicking and screaming and going limp and saying “No! No! No!”

It was so unexpected, really. I tried to get him to sit in the row in front but he was throwing such a fit I thought he might pitch himself out of the boat entirely, so I unceremoniously dumped him in our row and then followed him in and pinned him down.

Unsurprisingly, this little incident caught the attention of, well, everyone. I kept saying, “Theo, you love this ride!” and people were looking at me like “Lady, he clearly does not love this ride.” And the people in line were giving me looks like “Are we going to have to stop the whole ride so this crazy lady can get her child off?” I could just feel the Mommy of the Year Award slipping through my very fingers. And Kristin, helpful as always, was saying “Give me your camera–I want to get a picture of this tantrum!”

Then just as quickly as it began, it stopped, so by the time Kristin got ahold of the camera, this is what turned out. 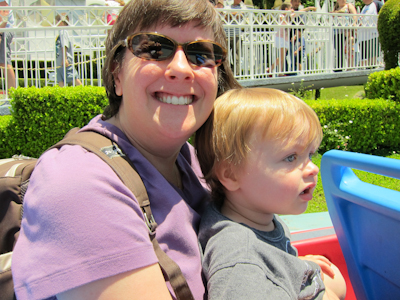 No visible evidence of the trauma sustained mere seconds prior.

Anyway, you float away from the loading dock and enter into the Tunnel of Doom. 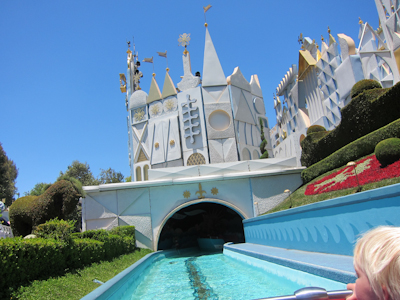 Or the Tunnel of Happiness or whatever

One thing I love about Small World is that throughout all of the years and renovations, they have not changed the artwork, so it still maintains its mid-60’s flair. I mean, you’d have to pretty much re-do then ENTIRE RIDE if you wanted to change the artwork, but back in the 80’s everyone thought that kind of thing was a Great Idea so I can say that I’m pleased Disneyland didn’t mess with it. 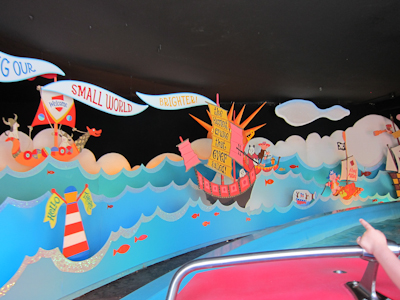 Also adding to the retro feel is the fact that Small World is sponsored by Sylvania. I do remember as a child watching Sylvania light bulb commercials, but I very much associate Sylvania with a time when people needed to be sold on a brand-name light bulb. And honestly, when I saw the sponsor, my first reaction was “Does Sylvania even exist anymore?” It does, and apparently it’s gone all LED to compete and stuff. I don’t know how much money they give to Disneyland for Small World, but that’s money they certainly didn’t put into their website, which looks like something I designed in a tech writing class in 1996.

Then you start moving through the various rooms. Sometimes it’s hard to know what country or continent or little chunk o’ the globe you’re supposed to be traveling through, but usually there are clues to orient you somewhere. 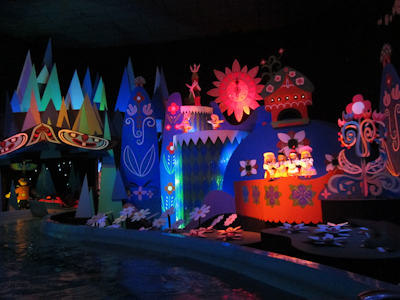 That's First Nations artwork over the door, and a Mountie--CANADA!

Some are very straightforward. 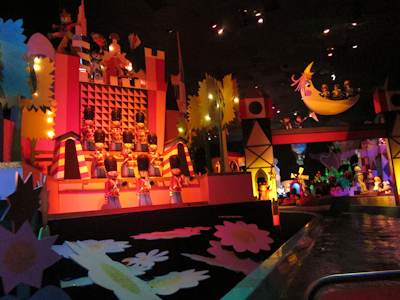 In the British Isles room you encounter your first Disney character. Like I said, I was really nervous about how they were going to pull this off, but I think they did a great job fitting it in. 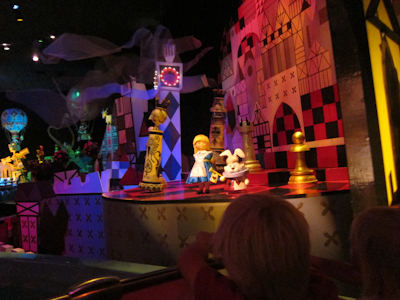 When we were in Oxford in 2009, we visited the Sweet Shop where Alice Liddell used to buy her candy.

Since I’m a huge Alice fan, I like that scene.

And how often do you see Cinderella WITHOUT the blue dress? 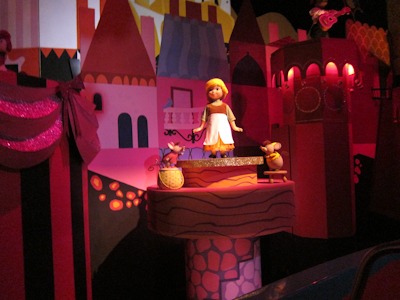 This is so charming

It’s refreshing, I tell you. If it weren’t for the mice, you wouldn’t even know it was Cinderella.

This German display goes out to Melinda and her family in Bavaria. 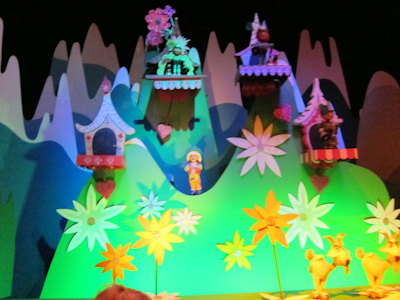 Sorry about the photo quality there, Melinda. It’s the thought that counts. 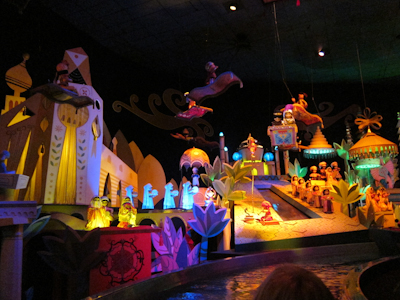 And interestingly, Standard Research Methodology, Aladdin was not originally part of the Arabic versions of the One Thousand and One Nights. Hunh.

Over in China we find my favorite ass-kicking princess, Mulan. 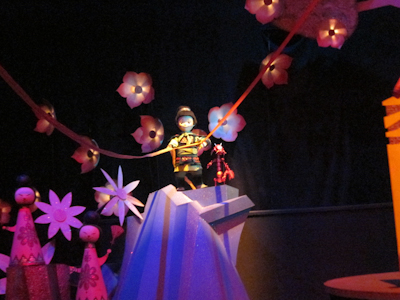 And seriously, who DOESN'T want a talking pet dragon named after my favorite Chinese dish?

Some of the scenes are more fanciful than others, like Africa Dipped In Pink. 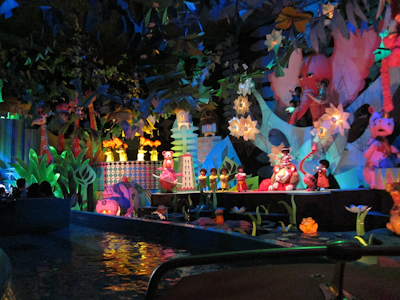 It's gonna take a lot to drag me away from you...

And some I just couldn’t figure out at all. 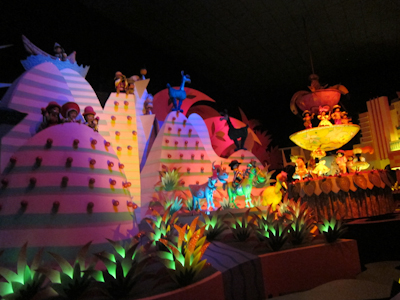 Where the hell IS this?

UPDATE: Reader correction–This is the Andes! Which also answers my other question, “where is South America represented?”

And let’s not forget the joyous world under the sea. There was already a mermaid scene, so it was kind of a no-brainer to throw Ariel in there. However, they kept the existing other mermaid dolls, so those don’t quite match with Ariel’s sisters in the movie. 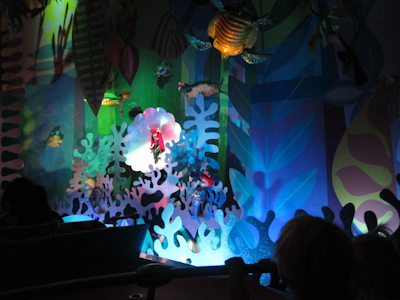 Maybe they're distant cousins or something

Over in the Tahitian-ish room you have one of my favorite scenes from when I was little–the hula dancers. For some reason, those grass skirts shaking all at the same time was utterly fascinating to me. 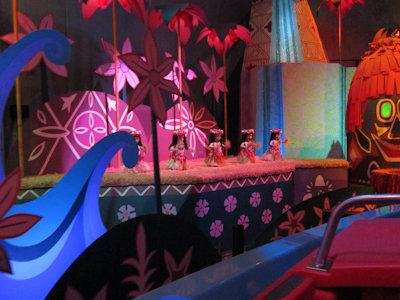 Then new after the refurb was the good old U. S. of A. Or maybe it’s not new and I never noticed it before, but I’m pretty sure it’s new. 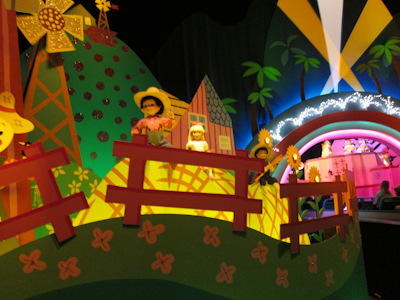 I think they needed the room to stick in Woody and Jessie. However, out of all of the additions to Small World, I really hate these. I don’t know why they couldn’t just make them dolls like everyone else. I think they look horrible. 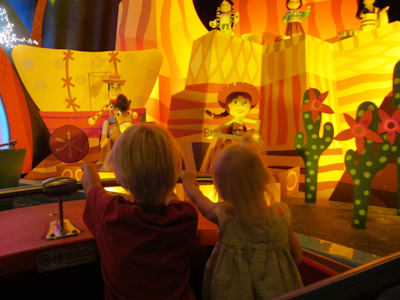 However, if you are avid Woody and Jessie aficionados like Anderson and Annika, you keep looking at them even when your boat has passed them. 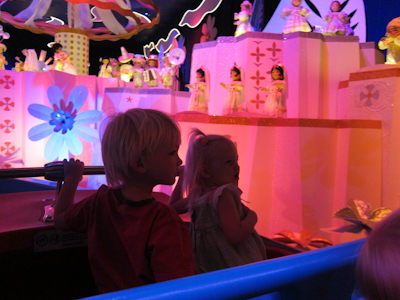 After America you get to the Grande Finale room, which is where all of the other rooms send representative delegations to hammer out world peace by wearing traditional clothes, dancing their native dances, and singing in English. 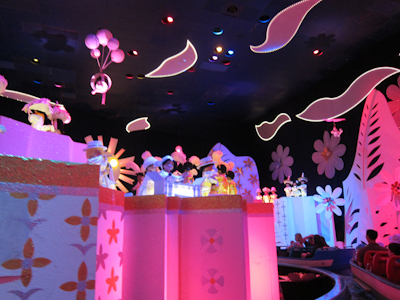 A giant sun bids you a friendly farewell as your journey comes to an end. 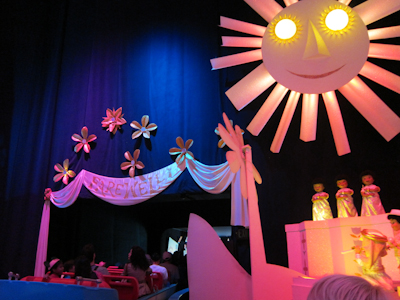 This doorway is actually cooler in the holiday version

Then you can send oversized postcards to your friends reminding them that you’re at Disneyland and they are not. 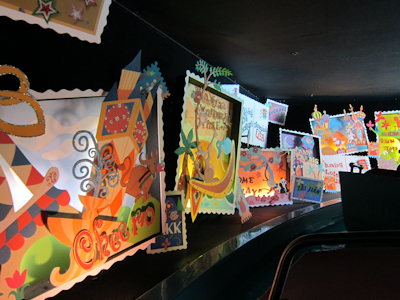 Weather is here, wish you were beautiful

Then you drift back out into the outside world. Kevin likes this part because it’s the only attraction in the park where the “stay seated please” is repeated in German.

And I have to say, of all of the rides repeated at Walt Disney World, the Small World there left me shocked and speechless, it was so bad. The rooms were jumbled and crowded, nobody was singing in their languages (or singing at all, I think they had the music turned way down), it was impossible to tell where in the world you were at any given time. As far as Small World goes, the original is DEFINITELY the best.

So give Small World a chance. There’s so much to see in there and I think you’ll really like it.