Guest Post Alert:  Hi, everyone — I’m Kevin!  Careful readers of this blog already know me as Shelby’s husband, or “that guy in the background who’s holding up Theo in some of the pictures”.  Since I’m not Shelby, I’ll be writing about something that’s not Disney: Knott’s Berry Farm.

People who live in Southern California are stewing in year-round amusement parks.  Within a few hours’ drive, there are FOUR major choices: the Disneyland Resort, Knott’s Berry Farm, Universal Studios, and Six Flags Magic Mountain.  If that’s not enough, there are smaller local parks, like Adventure City in Anaheim or Castle Park in Riverside.  (Growing up in that atmosphere, imagine my surprise when I moved to San Jose after college to find that there was only one local park  — Great America — and that it was CLOSED much of the year for something called the ‘off season’.)

With all of those choices, as a kid, I went to Knott’s most often.  I think that there were three big reasons:

Years later, we go to Knott’s for the same reasons.  It’s still cheap — next year, when Theo is 3 and no longer gets a free ride, we can buy a family set of Knott’s passes for the cost of one Disneyland annual passport.  Knott’s is now ‘my’ park, with years of warm fuzzy memories.  And while Theo frequently wakes up asking to “see Snoopy” (that is, go to Knott’s and see Snoopy), he’s never asked to go see Mickey Mouse.

But yet, Knott’s leaves me feeling conflicted.  For while on trips to Disneyland, Shelby often gets to listen to me complain about Disneyland tearing out the Skyway and the Motor Boat Cruise, Knott’s is screwing with my memories on a far grander scale.

Let’s start an extended explanation with a historical interlude.  Knott’s got its start in the 1930s, when Walter and Cordelia Knott — who already had a thriving roadside business with a berry market, a plant nursery, and a tea room — decided to expand by opening a chicken dinner restaurant.  It’s still there, in more or less the same set of buildings.

It may not have regular three-hour lines like in the 1930s and 40s anymore, but stay away when it's time for Mothers' Day Champagne Brunch.

The Chicken Dinner Restaurant was so popular that starting in the 1940s, Walter Knott (who loved himself some Americana, particularly the Old West) decided to build a ghost town as a diversion for his guests while they waited for space in the restaurant.  Some of the buildings were relocated from authentic ghost towns across the west, but much of it was built (in a suitably ramshackle and aged fashion) right there on site. 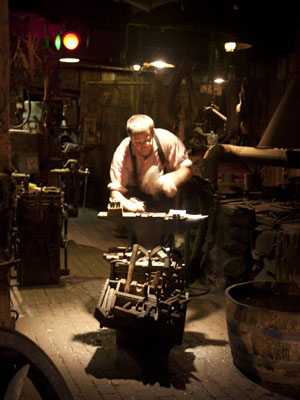 You can still get a personalized hand-hammered souvenir horseshoe from the blacksmith's shop, just like sixty years ago.

Steve Martin got his start performing in Ghost Town's Bird Cage Theatre. The theater used to host daily performances, but is now only open during Halloween and Christmastime. 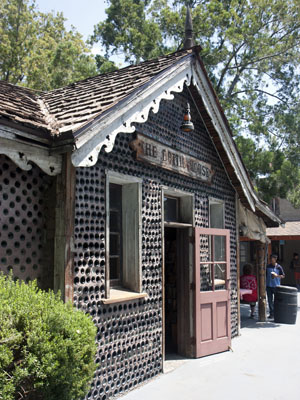 With the amount of wine we drink, a bottle house like Ghost Town's could be a viable alternative to recycling (make sure that you build yours with the *bottoms* of the bottles facing outwards, particularly if you live somewhere windy)

Some of Theo’s favorite rides at Knott’s happen to be their oldest, like the Ghost Town & Calico Railroad (which uses real narrow-gauge railroad equipment brought to Buena Park from Colorado after its retirement; the steam engine pictured below was built in 1881), or the stagecoach.  (Although for our two-and-one-half-year-old diva, the stagecoach is only fun if you can sit on one of the outside seats at the top of the coach and wave at people like you’re riding a parade float.) 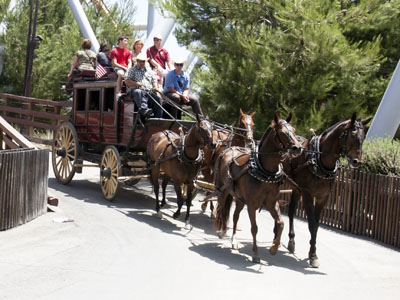 Nobody's waving; obviously nobody on this coach shares Theo's love of the crowd 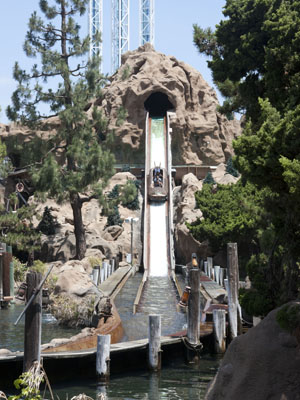 The carousel at Knott’s is another of Theo’s favorites. While it doesn’t have the size and polish of Disneyland’s King Arthur Carousel (which, according to Wikipedia, is actually an unholy amalgam of multiple carousels), the animals on both carousels were carved by the same maker — and instead of offering only horses, the Knott’s carousel has an entire menagerie that includes rabbits and giraffes:

But if you’re going to Knott’s with a member of the toddler set, what you’re really going for is Camp Snoopy.

The entrance to Camp Snoopy, prominently featuring Our Hero

As the name might lead you to believe, the architecture is National Park Service rustic; the attractions are Snoopy-themed and focused towards the smaller set. 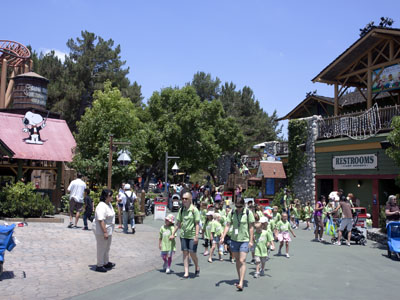 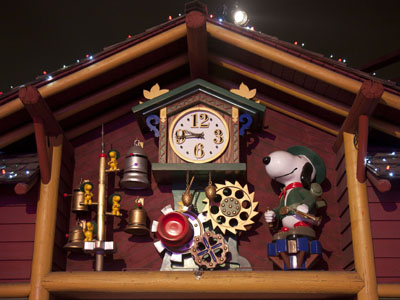 Whether you consider it a blessing or a curse, this clock is as close as you'll come to "it's a small world" while you're inside Knott's.

It's just like the grown-up version! (Except that it doesn't end with actors dressed as Old West desperados jumping on the train to commit a pretend stickup.)

So now that I’ve shown you a bunch of cool stuff at Knott’s Berry Farm … what’s my problem?  My problem, alas, is everywhere in the park outside of Ghost Town and Camp Snoopy.  Starting in the 90s, and accelerating after the Knott family sold the park to Cedar Fair (a company that operates ten other amusement parks across the US) in 1997, the Powers That Be decided that what Knott’s really needed to add to attract a more youthful crowd was thrill rides what like those kids are riding these days.  So they started shoehorning as many thrill rides and roller coasters as possible into the park, with none of the theming or thoughtful touches that make older Knott’s so attractive — think vast treeless concrete plazas punctuated by metal pylons and the occasional trash can.

Maybe they thought that the kids wanted something depressing looking, to match that 'emo' music they're always listening to 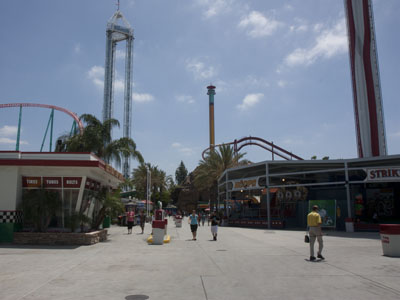 At night when they turn the spotlights on, it looks kind of like a prison exercise yard, or an empty Caltrans maintenance lot 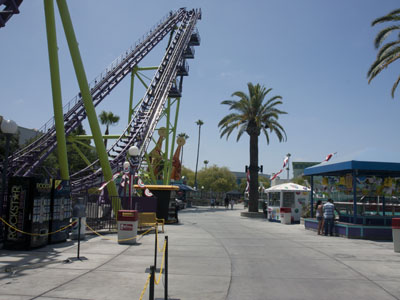 While Ghost Town has been largely spared from the coaster onslaught — for now — the pylons march ever closer.  In Camp Snoopy, they’ve already replaced many of the original custom-built themed elements with off-the-shelf carnival flat rides (thanks to maintenance costs, I’m assuming): 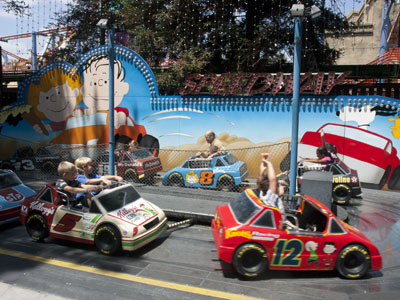 Ironically, this is Theo's favorite ride in Camp Snoopy. But he'll be sorry later, when he gets to push my wheelchair everywhere, after I lose my legs thanks to the contortions that I had to make to get in this thing

It’s a small park, and they’re pretty much using all of the space that they have.  Who knows what the future will bring?

But chin up — and on your way out of the park, stop at some of the stores outside the front gate.  If you’re a Snoopy fan, don’t miss Snoopy Headquarters:

If you're in the market for something Snoopy, the Snoopy Headquarters is the place to be.

(Although note that the Snoopy store inside Camp Snoopy often has a better selection of certain items, because while any old tour bus can hit the Snoopy HQ outside the park, you have to have a park admission to visit the other Snoopy store — and most people inside the park aren’t thinking about buying any Snoopy collectible larger or more expensive than a T-shirt.)

And if you’re a fan of kitsch in its many forms, don’t miss Virginia’s Gift Shop.  (Who was Virginia?  One of Walter Knott’s daughters.)  If it’s vaguely ‘collectible’ — Precious Moments, Department 56, cut glass, music boxes, weird dolls — it’s in here.  If it’s ‘Americana’ — John Wayne, James Dean, Elvis, Route 66, Southwestern “Indian” art with wolves and Kokopellis and stuff — it’s in here.  If I wanted to buy a black velvet painting of John Wayne and Ronald Reagan high-fiving a Bald Eagle (with a tear in its eye) as the three of them ascend to meet Jesus in Heaven, this would be the first place I’d look. 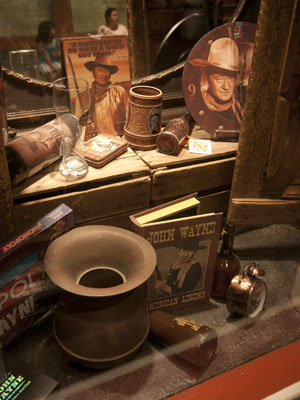 What did I tell you about John Wayne?

And what did I tell you about weird dolls? I have no words, other than to say that someone who'd actually buy this should probably be placed on some kind of watchlist.

Finally, as a special treat for those of you who’ve read this post to the end, I present this oddity, taken in April 1984: 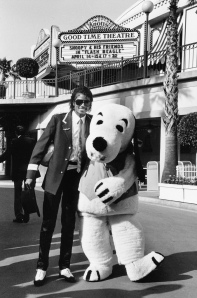 Yes, that’s who you think it is standing next to Snoopy.  And in the background, the marquee is advertising a stage show based on the Peanuts TV special, “It’s Flashbeagle, Charlie Brown“, the most forgettable Peanuts special ever — except in our house, where Theo asks for it by name (“Flashbeagle?  See … FLASHBEAGLE!!”) and would gladly watch it over and over again all day long, if given the opportunity.