Kevin here, again.  It’ll only be a little while longer until Shelby comes back home from Vermont and starts producing hot and fresh content for your delectation (yes, yes, you’ve been reading her posts this week — she wrote them before she left and put them away to be republished later, like carefully-wrapped casseroles in the freezer).  Until then, here’s a mini-post from me.

Last week, Theo and I spent four days up in our local mountains at my grandparents’ vacation cabin.  Like any vacation home worth its salt, the cabin has a stash of ancient National Geographic magazines — emergency intellectual nourishment, I suppose, to be read after you’ve exhausted all other possible options.  (The literary equivalent of those 2004-vintage cans of Dinty Moore stew that are in our garden shed earthquake kit.) 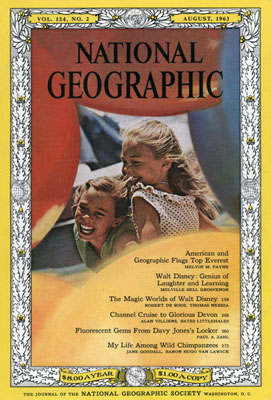 One issue is of particular interest to fans of Disney and Disneyland: August, 1963.  This issue is basically a love letter to the Walt Disney Corporation, with pages and pages devoted to activities at the Studios and Disney’s relatively new theme park, Disneyland.  The reader gets a National Geographic-quality photo tour of the park.  Coming attractions, like the Tiki Room and Great Moments with Mr. Lincoln, are introduced.  Things that are now commonplace cultural knowledge have to be explained (“Sprouting mouse ears testify that this young Disneylander is a Mousketeer, a fan of Mickey’s”).

At the end of the article, the author asks Walt “What happens when there is no more Walt Disney?”  Walt essentially dismisses the thought, saying that while he’s handing over more responsibility to others, he’s “61.  I’ve got everything I started out with except my tonsils, and that’s above average.  I plan to be around for a while.”  Since we know now that Walt would die of lung cancer just three years after this article was written, this brings the piece to a bittersweet close.

The “Modern Mechanix” blog has scanned in all of this giant fifty-page article, in three parts:  One, Two, and Three.  Part two contains a particularly nice fold-out map of 1963-era Disneyland.

Two ads elsewhere in the magazine caught my eye: 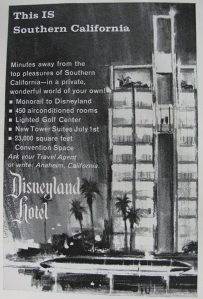 The Disneyland Hotel has had the same basic appearance for my entire life; much like Disneyland itself, it’s hard to think of a time when it was actually brand-new.

PLAY and LIVE in ANAHEIM -- home of Disneyland! (Click for a larger version)

Living in Anaheim, you pretty often hear it referred to pejoratively (Anacrime, Anaslime, etc., etc.) by the kind of people who prefer the spic-and-span planned communities of South Orange County.  While I quite like our town, even I think of it as ‘old’, probably because we live in our 1920s house in the historic Anaheim Colony (founded by German immigrants in 1857) area downtown.  So, it’s a little mind-bending to see it advertised nationally as the progressive and balanced (and atom-powered, no doubt) City of Tomorrow.

The Knott’s-Disney Connection That Almost Was:  I can’t believe that I forgot to mention this in my article on Knott’s Berry Farm.  In the days of Walt Disney and Walter Knott, there was a spirit of friendly competition between Knott’s and Disneyland, with each man visiting the other’s park to check up on the latest developments.  In the 1990s, the two parks almost became much closer, joining the same family in a theme-park version of The Brady Bunch.  Essentially, the story is this: before developing California Adventure, Disney was exploring ideas for a “second gate” in the Orange County/Los Angeles area.  At the same time, the Knott family was looking for a buyer for their amusement park.  In response to both of these, Disney’s Imagineering staff came up with an idea for how Knott’s could be rethemed and expanded into “Disney’s America”.  In the end, the deal was scuttled because of logistical issues (how to move thousands of people between Anaheim and Buena Park?), Disney execs not wanting to refurbish someone else’s dirty ‘ol park, and (O the irony) the Knott heirs’ fear that Disney’s retheming would wipe out their parents’ legacy.  You can read more about “Disney’s America” here.