Boy am I tired! Last night we went to the special Annual Passholder Soundsational Parade event. It was an RSVP-only event held after park hours from 8pm to Midnight. The highlight was our very own viewing of the Soundsational Parade. Most of the Fantasyland and Tomorrowland attractions were open (except Autopia) and four of the restaurants offered a special Soundsational treat only to those with Soundsational wristbands.  The treat at the Refreshment Corner was a hot dog, the one at Blue Ribbon Bakery was a pumpkin muffin, and there were also ones at Tomorrowland Terrace and Redd Rockett’s Pizza Port that we didn’t get to.

The highlight, aside from only having less than 5,000 people in the park, was the Soundsational Parade. Soundsational is Disneyland’s newest parade, just opening this summer. I’ve already seen it (twice, actually) but Kevin and Theo hadn’t, so the AP night was the perfect opportunity.

And let me tell you ladies and gentlemice, I thought the parade was fantastic in the sunlight? It is absolutely stunning at night. S.T.U.N.N.I.N.G. The lights, colors, and music are really amazing, vivid, and enchanting. There are nine floats and each float is preceded by a group of dancers and often followed by a comedy hangers-on.

We got this prime parade seating right by Alice approximately 5 minutes before the parade started. If you’ve ever waited for a parade at Disneyland, you’ll understand how remarkable this is. And incidentally, the best places to watch the parades in my opinion are back toward Small World. You don’t have to stake your spot out hours in advance and it’s the same parade that goes right through Main Street where people DO wait.

Right in front with tons of space

It’s always exciting getting your first glimpse of a parade float. Mickey and Minnie kicked us off

They started off with a fun drumline

Reminded me of my old marching band days

The float itself is emblematic of what they all look like. The word “kinetic” comes to mind. I’m not sure why, since I don’t 100% know the meaning of that word, but it seems like it should apply. Plus it makes me sound pretentious. 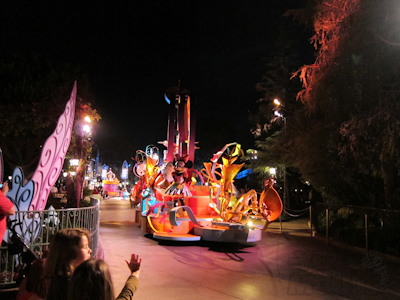 Mickey and Minnie were onboard being all musical and stuff. Theo loved that part.

The little details were fantastic

Goofy had his own little float 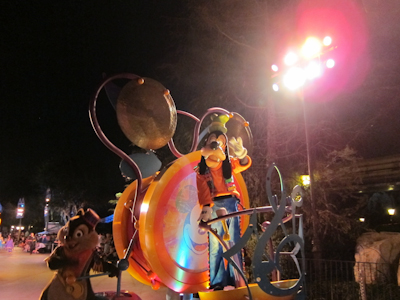 The drum and cymbals are Mickey shaped!

Chip and Dale danced along with him.

Next came Aladdin with his dancers. Check out that fabulous color!!! 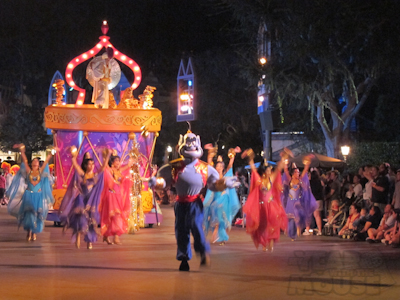 Aladdin is up on top with his riches. 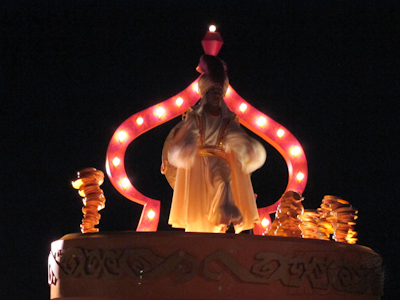 And Abu had a comical guy driving him around

The Little Mermaid’s dancers came up next 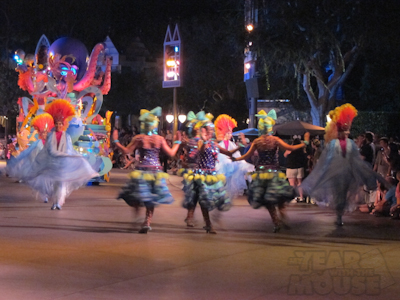 The big, flowy ones had these amazing wings

And their silly hanger-on was a crab

He stopped and talked to us. I swear to god, with his eyes!

Next, I’ll be honest, was probably my least favorite Disney movie of all, the Three Caballeros 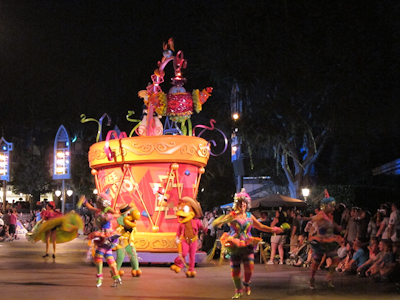 I'm just not a fan, sorry

The characters were all really great at reaching over and giving high fives to the kids in our little section.

Even the somewhat scary parrot dude

Now I’ll just take a moment here and say that I think I enjoyed the parade  so much more at night and from this spot because it wasn’t polluted with a bunch of visual noise (how’s THAT for pretentious???). I mean, usually the surrounding area is also full of color and movement and traffic, particularly on Main Street, but from both our vantage point (which I’m becoming more and more a fan of) and the fact that it was dark made the floats really stand out.

The princess coterie (pretentious!) looked like they just came from court. 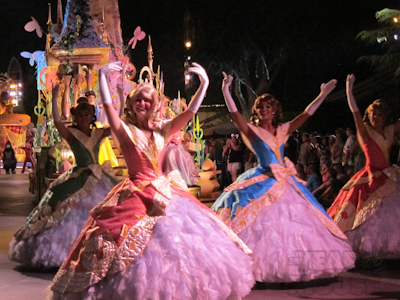 Can you imagine trying to slow-dance at prom in one of those dresses?

And here was another favorite part of mine–the many princesses in one float. Five on this one to be exact. For those of us who aren’t completely into princesses, it is nice to see them sort of bunched together rather than all on their separate floats.

This special picture is just for Jessica

Now you're asking "How do I get my own special picture on MYWTM?"

And just when you thought the princesses were all done, there’s Cinderella and Belle on the back!

Belle says "I'd rather be sitting"

The Lion King came next. It had a group of dancing acrobatic monkeys first. Doesn’t that sound cool? Unfortunately, they were human.

One of Simba's extremely rare appearances in Disneyland

The Lion King float also had very cool dancers on stilts. See what I mean about the colors? 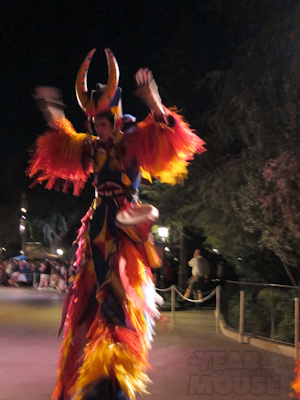 How come they never bring out the stilts for the princess floats?

The Princess and the Frog came next. There was an awesome group of flappers-style dancers. It was hard to take a picture since they were all, you know, dancing, but I did get this one. And at first I thought it was an AWESOME PHOTOGRAPHER shot but now I think it’s actually really cool.

"I took the picture like this on purpose" she said pretentiously

There were also dancing masquerade masks, which were just gorgeous.

Not quite centered there. Tiana’s float was also really beautiful and a good example of what I mean by how much better it looked in the dark. 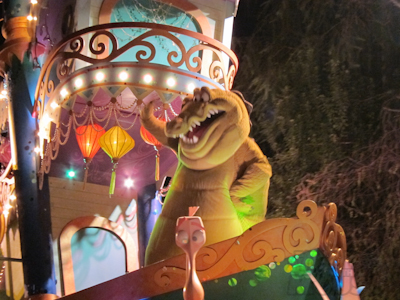 Tinkerbell came next. Given her current popularity, I was actually kind of surprised by how low-key her float–I mean drum–looked. Smee and the other pirates, Captain Hook, and Peter Pan all danced along ahead.

Why is Smee like twice the size of Captain Hook?

I was too busy enjoying Peter Pan’s antics with our little group to take a picture of Tink.

I did, however, get this beautiful shot of a butterfly in advance of the last float

The detail is positively exquisite (pretentious!)

The last float was from Mary Poppins. There were difficult-to-photograph chimney sweeps, like a chimney sweep drill team, and then Mary and Bert came along on these little mini-floats like carousel horses that actually went up and down.

The float was just resplendent (pretentious!)

even the chimney sweep on the moon 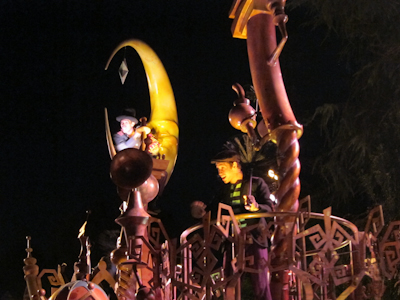 As you can see, the parade was just gorgeous. I highly recommend watching it at  night if you can, or watching it from the vantage point of the least amount of visual noise. It really was stunning.