My BFF Wendy, who has the gall to live 6 hours away from us (I mean really, where are her priorities?), really wanted to be on MYWTM. And things seemed really awesome when she and her husband made plans to come down to Disneyland right before their 6-year-old Sadie started school–except that our annual passes are still blocked and they had to go by themselves. So then Wendy was all “I’m going to write a guest post for you! Like all of the things I learned from MYWTM that made my day awesome! And then I can be on your blog!” and I was like “Yeah, that would be great!” and then she calls and she’s like “I don’t have time to write a post for you, but can I just tell you about it and then you can write the post?” and I was like, “Oh fine, just USE me to further your own dreams of bloggy fame. And what the hell are you doing, living 6 hours away anyway?” and she was like, “Thanks, you’re awesome!” and I was like “You know, there’s a house for sale a couple of blocks away–we could be neighbors!” and she was like “Um, we have jobs…”

Well, it didn’t go down quite like that, but you know what I mean.

These are the things Wendy told me.

I have written in the past about the little secret passages that lead from either side of Sleeping Beauty’s Castle, one into what used to be Carnation Plaza on the way to Frontierland (which is now closed), and one to Tomorrowland via Snow White’s Grotto. In my tips, the secret passage is a great place to find surprise princesses, often with little or no waits. Well, apparently on Wendy’s trip, Marc left some stuff in the car, so Wendy and Sadie thought they would check out the secret passage to Tomorrowland and sure enough…

Ariel, Snow White, and hardly any other guests!

Sadie was hyper-focused on the fairies, though, and she couldn’t wait to get into Pixie Hollow (post coming up), so she was less impressed by finding these princesses than Wendy was.

I’ll talk more about PhotoPass (I mean, Wendy will talk more about PP, but through me, but not in a Madame Leota way), but taking a picture in front of the castle is both iconic and pretty much mandatory. The nice thing about the PP photographer is that they will take a picture with your camera, and get a great family shot like this one

Many readers know my love of churros. While churro-eating at 10:30am is not generally Wendy’s MO, she reported that she saw a churro cart and “knew this would be a churro moment for Shelby.” Indeed, it is. She also reports the churro being awesome.

Check out the exit signs!

Inspired by my Looking Up post, Wendy said she took special care to look up and look around, and was delighted to discover things like how exit signs are all themed. Yep, Disneyland puts love and care into every detail, even down to the exit signs. Unfortunately, Wendy did not take any pictures of any interesting exit signs, so I suppose I’ll have to go do that myself. Thanks for making extra work for me, Wendy.

Chose not to go to California Adventure

Wendy and fam were only available to go to Disneyland for one day. Wendy says that MYWTM convinced her that there’s more than enough to do in one park for the day, and rather than rush around trying to do everything between two parks, they just decided to slow down and enjoy Disneyland itself. This allowed for being able to do things like watch the parade without feeling like they were missing something else. Which brings me to…

Prior to writing this blog, I had never watched a daytime parade, and neither had Wendy (incidentally, Wendy also grew up in Southern California so she’s been to Disneyland many times–we’ve even gone together). I was always too busy getting to my favorite rides to waste time on something like the parade. Well, after reading MYWTM posts about Soundsational (another post with a video here), Wendy decided that they would, gosh darn it, sit down, relax, and watch the parade. Sadie got bribed with cotton candy. 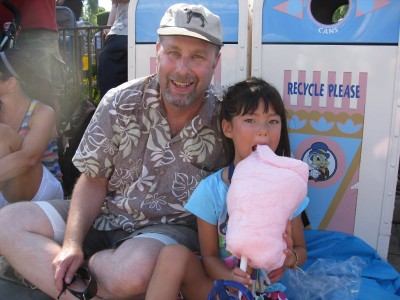 Wendy says that this was her favorite moment of the day–just sitting there, being present, and living in the moment–which is what MYWTM is all about. She loved how the performers made eye contact and waved directly at you as they were going by, and that the parade is much more interactive than she thought it would be.

While they didn’t buy an entire PhotoPass CD or use the new PhotoPass+ service, Wendy says they really enjoyed the PhotoPass photographers and did buy one special “magic picture.” She said that the best part of PhotoPass is that you can get your whole family in the picture and they are perfectly nice and willing to take pictures with your own camera–“It was great to just hand the camera over.” the PP photographers also took more than one picture with your camera for each pose, and even took candids without being asked.

Family picture at the Rapunzel meet and greet

Candid by the PhotoPass photographer

I love the look on Sadie’s face in that picture, don’t you?

And finally, PhotoPass does these things called “Magic Pictures” where they can digitally insert special characters into pictures. I knew about them but haven’t blogged about them yet, so Wendy didn’t get the idea from me–it was suggested by a PP photographer. But this is the one picture they bought:

This is another tip Wendy didn’t get from me but got from someone else–realizing her lifelong dream of holding the Mickey balloons. I personally have always wanted to do this but never even thought to ask. Also, in an effort to seize the day, Wendy treated herself to one of these balloons. I have also always wanted one and never bought one–why not? Go for it! They stay inflated forever.

This is so cool

“The Jolly Holiday was really good, not as expensive as I thought it was going to be, and the sandwiches were huge”

My new favorite place to eat is the Jolly Holiday Bakery Cafe, and on my suggestion, Wendy and the fam headed there to eat. They were pleased, as the above quote illustrates.

Wendy said that while she always thinks of Disneyland as being very expensive, and it is, she really felt that it was worth the money. For being there all day, the way they were treated, and how happy Sadie was, she said was totally worth every penny. For example, they ate at the Blue Bayou, where Sadie got a glowing Tinkerbell clip on her drink. They had been taking it on and off all day until later in the evening when Wendy discovered they’d lost it. Sadie decided to try going back to the restaurant and asking for another one, and sure enough, the cast member was more than happy to pull one right out and give it to her. Of course, Wendy found the original Tinkerbell in the bottom of her purse after they got home, but the replacement was awesome.

“You’re at Disneyland–live it up!”

Wendy said that her biggest takeaway from MYWTM was to really live it up. You’re there–enjoy it! Participate and have fun. The rides are great, but so is the whole experience. Eat a churro in the morning. Buy the balloon you’ve been wanting since you were a kid. Wave at the parade performers. Pay a few dollars to get that magic Tinkerbell picture. Act like a kid. 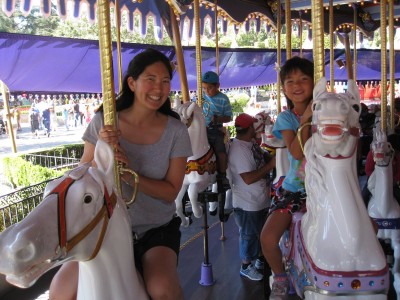 You can’t get these days back–enjoy them!

Everything Else Disneyland trip report
← Oswald’s Service Station (Apparently Again!) Flo’s V8 Cafe, or I Should Have Had a V8! →