Yesterday I introduced you to Castle Secret Passages Part 1: Frontierland, with two bonus princesses (Belle and the pink one) thrown in. Today, I’m going to talk about the other secret passage.

This one is on the right as you walk through the drawbridge, and goes to Tomorrowland.

Portrait of a smart woman taking a shortcut 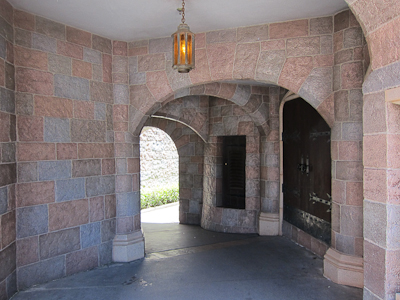 The nice thing is that you pass the very charming Snow White’s grotto and wishing well.

Oh look! There it is! 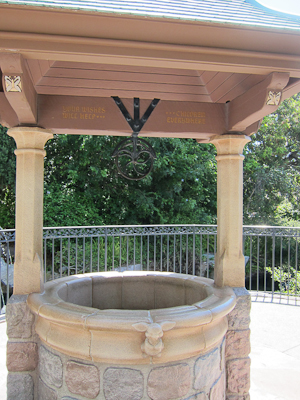 One of two wishing wells in the park. Anyone know where the other is? I do.

Apparently they clean out all of the coins and send them to some charity or something. The sign was non-specific.

Also in the grotto are all seven dwarves.

Dwarves in their natural environment--water.

It has been at least 20 years, maybe a good 30, since I saw Snow White. As the original Disney animated feature, I’m a little nervous to see it again. Oh, and am I the only one who remembers this–way back in the day before VCRs, Disney used to release the classics in the actual movie theaters periodically? So if you wanted to see Cinderella, you just waited a certain number of years and then you could go see it in the theater. In some ways I long for that simplicity. Then I turn on my DVR and watch 6 episodes of the same show commercial-free.

In a rather sickeningly sweet touch, the bridge leading to the grotto is festooned with hearts.

The word "treacly" comes to mind

And although I did not catch any this visit, I have also seen princesses hiding on this side too. Here’s your obligatory map. Circle denotes princess area. 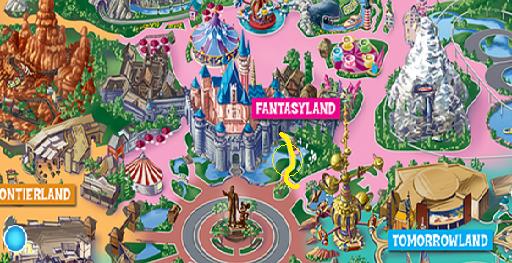