It’s the most wonderful time of the year! I love Christmas and the whole holiday season. We have a ~10-year-old fake tree, purchased after many years of live trees (well, trees cut down in the prime of their lives). I love the smell of a (formerly) live tree, but I did have 3 big problems with it: 1) Pine needles. Everywhere. 2) Disposal–where do I put this thing (no, my city does not have one of those fancy programs where they drop it into a lake and it becomes a refuge for fish or something), and 3) Guilt over having killed a tree. So we invested in a fake tree and it’s one of those pre-lit ones that’s all easy and stuff.

Or I should say it WAS one of those pre-lit ones. Kevin dragged that puppy out tonight and plugged it in only to find one out of four sections lighting up. He jiggled the tree a bit (no kidding, stood there and shook it) and two more sections lit up, which on the one hand, YAY! but on the other hand, is that safe? Still, the last section eluded us, even after I gave it a good shake myself. Kevin checked the fuse (good) and replaced a few bulbs, but…nothing. So he made an emergency Target run to buy a couple of strands of extra lights to fill in the blank spots, and you can barely tell the difference between the 10-year-old lights, which are the old fashioned ones that only light up when you shake the tree, and the new LED lights that kind of burn your eyeballs out if you look too closely.

Now if we were REALLY cool, we’d have a tree like this:

This is a cool tree

Granted we don’t have the height in our living room–or I should say the dining room since that’s where we’re putting it this year. That part of the house is frequently baby-gated off so Theo can’t get to it. I know some kids do just fine with the tree in the room and putting the non-breakable ornaments at the bottom and all, but my child isn’t one of those. We did have a fleeting moment of “hey, that might be okay” but then saw him driving the coffee table around like it’s a car, so, no. Last year we set the tree up and then surrounded it with portable dog fencing. All was well until I was in the other room and heard BAM! BAM! BAM! I went to the living room and saw this:

I took this with my cell phone--can you tell?

Yes, the mostly-naked Theo simply hopped on his toy 4-wheeler and proceeded to ram the fencing until it caved in enough for him to reach it. He’s got a bright future as a construction worker.

Anyway, if you want a tree, Disneyland does it right.

From more of a distance

I heard that they used to get a live tree–or get a very tall live tree and a bunch of smaller ones and plugging the branches in the holes of the original tree, but now the Disneyland tree is fake. It does lend itself to a nice, even triangle shape, and allows for maximum ornament coverage

Isn't this a gorgeous picture? Kevin took it.

Disneyland is–shocker–wonderful in their holiday decorations, starting at the gate 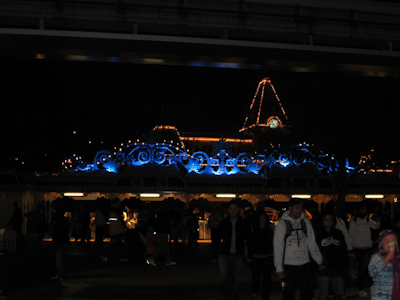 This is a bad picture. It isn't even so bad it's awesome. It's just bad.

But when you round the corner onto Town Square, you catch your glimpse. 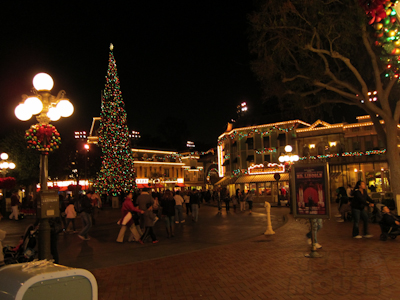 The holidays have begun!

Back toward Small World, they have cute little wreaths with cutouts. I don’t remember these from last year so they’re either new or I’m completely unobservant (let’s face it–probably the latter).

I thought he was particularly cute

And the castle, of course, is amazing.

Taken by Kevin, of course

I can’t wait to go back!

One response to “Christmas Decorations”