I have eaten a large portion of the gingerbread man my son decorated at preschool. Does that make me a bad person? Please say no. In my defense, he didn’t even finish the first piece of it he got and clearly did not like it. So that makes it okay. Right?

Way at the back of the park in Frontierland is the Big Thunder BBQ. It’s a rather expensive eating spot with all-you-care-to-eat ribs and BBQ chicken. I’ve never eaten there, but I’ve heard it’s good.

But during the various holiday season it transforms.

Back in the day when I worked at Downtown Disney and was considered a cast member, we got to attend the cast member Christmas party, and at said party, this area hosted a cookie decorating station.

See, it all comes back around. I bet you were wondering what my eating Theo’s cookie had to do with Disneyland, so there ya go.

There are extensive decorations.

It's a wagon and stuff

My mother-in-law makes quilts. Hers are kickass.

Apropos of nothing, I just looked up a recipe for figgy pudding. No thanks.

Closer shot of the stage and performers

Like most Disney performances, the Reindeer Round-Up is participatory to children brave enough to climb on stage. This time they were learning how to sing “Here Comes Santa Claus.”

Up on the rooftop, reindeer paws

The kids are then left to perform by themselves, and it’s pretty much the cutest thing ever.

Some of these brave kids were younger than Theo!

The dude with the guitar also performs

Dude with the guitar

And the seating area is also decorated 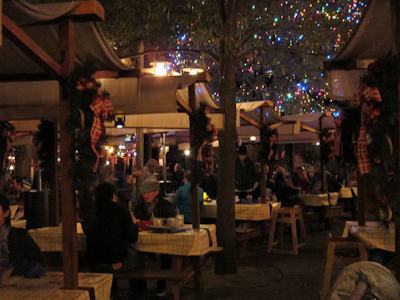 It actually looks better than in this picture

And then your crucial piece of information–the bathroom

It's even Frontierland themed!

I mention this because this bathroom received The Happiest Potties On Earth’s highest rating. The only other potties to achieve this rating are the ones in Club 33!

You will definitely want to pee here

Along with the general entertainment, awesome bathroom, and atmosphere, there’s animals! 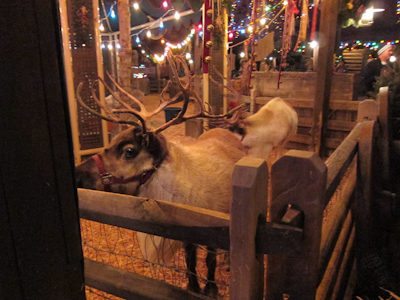 Santa also hides back here, but I’m going to bring Theo to see him, so you’ll just have to wait for the pictures ;).