New Orleans Square is such a lovely place to walk around. Little details everywhere are just delightful.

So it makes me feel incredibly guilty that I’ve spent so little time there in all my time at Disneyland. Although that’s what this blog is for, right?

For example, I had no idea this existed. 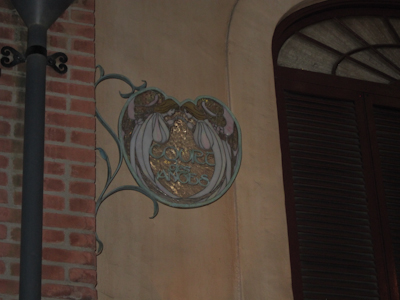 Tucked away close to the exit of Pirates of the Caribbean (and speaking of feeling guilty, because as many times as I’ve ridden Pirates, I’m pretty sure I never turned my head left coming out of it) the Court des Anges is a cute little courtyard.

If you enter the Court and turn around, it looks like this

People subject to change without warning

To the left of the Court sign, there are stairs and a few doors

The main staircase, which is pretty much the focal point of the Court, starts out looking like this.

Potted plants and everything! 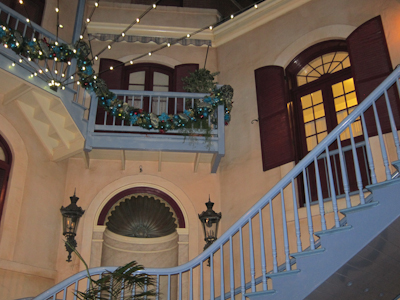 To a Cast Members Only door up at the top.

And unlike many of my other entries in which I kind of flail around pointlessly, I can say that this is actually part of Club 33. Ha! I knew something! I think.

But speaking of knowing things, or not knowing them as the case may be, partway up the stairs there’s one of those thingies that’s a recessed half-circle with a little statue of something.

In this case, a little boy

And I’m sure there’s a name for this type of thing, but I have no idea what it is. Anyone?

Also, much like Main Street, you can do various fictional things in this Court.

I’ve often thought that it would be awesome if some of these things were real. Like if you really could go to the dentist in the shop by the lockers on Main Street. I mean, I would totally do that. Or take music lessons or something. How cool would that be?