The Toy Story Zoetrope is another attraction within the Disney Animation building at the mouse-next-door. You can find it in the Character Close-Up section.

I took this close-up picture of the Character Close Up. Because it's close. And up. Get it?

The claw has chosen you to watch the zoetrope

And speaking of Little Green Men, this is completely unrelated to me or MYWTM in every way, but I absolutely love this flash mob of little green men. And they’re one of the best choreographed flash mobs I’ve seen!

I think one day I need to organize a MYWTM flash mob. What do you think? Maybe everyone could buy a churro and do an awesome dance.

Anyway, back to the zoetrope.

For starters, there’s that word. Zoetrope. How do you pronounce it? It was actually one of those words that I totally avoided saying out loud for fear of mispronouncing it. I’d just be like “Hey, have you seen that Toy Story spinner thing in CA Adventure? You know, the one that goes around?” And the other person would very clearly be trying to avoid saying the word too, like “Oh yeah! With Woody and Jessie! That flashes!”

Well ladies and gentlemice, through the power of Google I am now ready to inform you that zoetrope is pronounced:

A couple of different ways. Hey, it’s Google, okay? But most results seem to agree that it’s ZOH-uh-trope with some weighing in as ZOH-ee-trope.

So let’s just call it the Toy Story spinner thingy.

A zoetrope is a precursor to film animation in which an open-topped drum has slots in the side, and you put in a strip of paper (or whatever) with incrementally changing images, and when spun and viewed through the slots, it creates the illusion of motion.

The Toy Story zoetrope is on a grander scale. It contains disks of various Toy Story characters 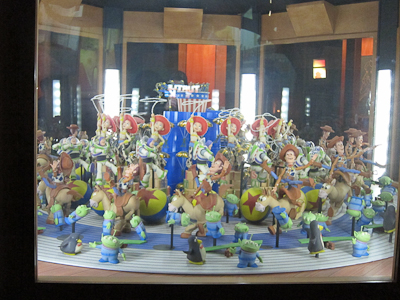 Here’s a close-up of some of the figures

The Little Green Men bounce around at the bottom. I love that.

The room is darkened and the zoetrope spins rapidly, and then there’s a strobe light effect that replaces the slots found in other zoetropes, which brings the figures to action.

And also it looks like this through the camera lens: 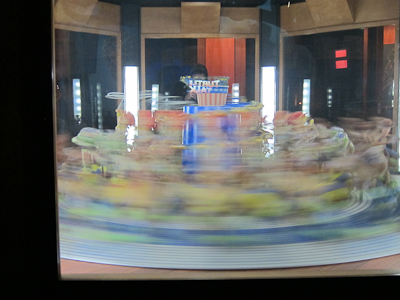 No, I don't have one of those cool high-speed cameras.

To be completely honest, the full-fledged zoetrope is not for the faint of stomach. The motion and strobe lights can be a bit overwhelming if you tend to be on the nauseous side. Still, the detail is fabulous and the moving drum is actually really cool to see.

Plus the Little Green Men.