Fantasmic! opened on May 13, 1992, which doesn’t really seem possible to me, since I still consider it a “new-ish” show. I mean I also consider Splash Mountain (Fall 1992) to be new-ish and Indiana Jones Adventure (Spring 1995) to be really new-ish, so basically what I’m saying is that my Disneyland brain froze in 1991 and everything afterwards is new.

And when “new” means 21 years…well let’s not think about that too hard.

Anyway, Disneyland threw an Annual Passholder-exclusive event celebrating the 20th anniversary of Fantasmic! and I got to go on Monday the 14th. (the other dates are the 15th, 21st, and 22nd)

A celebratory banner not exclusive to the AP event

This event was similar to the Soundsational AP Event in that it was open only to annual passholders who had RSVP’d in advance. We could get our wristbands anytime after noon, but the event actually started at 10pm and went to 1am with a showing of Fantasmic! at 11:30. Only Frontierland, Adventureland, and New Orleans Square were open for attractions.

And the show’s actual name is Fantasmic! with the exclamation point, so I’m not just throwing! that! in! there! for! fun! Because that’s irritating.

Other fun things about the Fantasmic! event are the commemorative t-shirts

The commemorative t-shirt, featured by my excellent photography

and a hoodie with the same design. It was quite cool, and the silver parts were all sparkly and stuff, but I’m cheap and it was expensive, and besides, black shirts just show all the dog hair leftover from this guy:

The other exclusive merchandise available was the popcorn bucket, which is the subject of the GIVEAWAY!!! See below.

There was also special food! 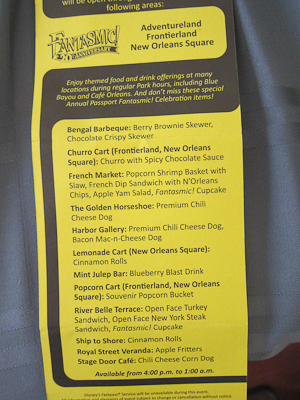 See if you can read this!

If you can’t read it, the menu was:

So basically the food ran the gamut from “Yum!” to “Uh, really?”

Now I know what you’re thinking–I went straight for the churro with spicy chocolate sauce, right? Well…I didn’t. I’m not a huge fan of spicy foods, and I didn’t know how spicy the spice was going to be, and the lines were long.

The skewers at the Bengal BBQ were almost identical to the ones from One More Disney Day, so I’m just going to recycle that picture here:

In this picture, it’s marshmallows between the crispies, but at the Fantasmic! event it was berries

Cause you know, digital photography, gotta save the film. Heh.

What I ended up going for was the Chili Cheese Corn Dog.

They had these really fancy, cool-looking signs

Once I saw the corn dog, I began to doubt my ability to actually eat it.

I’m kind of getting heartburn just looking at it

As you might have guessed from the picture, it was a corn dog covered in chili and cheese with fries on the side. And as a reminder, these are the same hand-dipped corn dogs you can get from the corn dog cart on Main Street. Anyway, at this point it was 10:30 and the viewing area for the Fantasmic! show (at 11:30) was filling up fast, so I figured I better go stake out a spot while I ate. So I did. With a giant corn dog. Slathered in chili. Standing up.

It was not, shall we say, graceful. Luckily it was dark.

The corn dog was indeed a bit much for me. I got about halfway through it before I had to throw it away. It tasted pretty much like what you’d expect a giant hand-dipped corn dog with chili and cheese to taste like. I had also considered the Mac-n-Cheese hot dog, but that looked even more intimidating than the corn dog. Anyway, so I ate half of it. 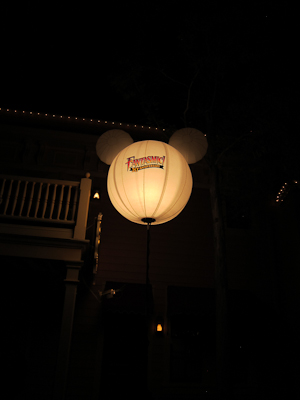 Here’s a picture of one of the Fantasmic! balloons decorating the area!

I also wanted a cupcake, but after the show they were sold out–boo. I did check out the cinnamon roll. 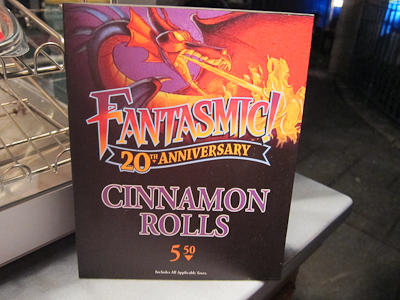 I actually tried to get a cast member to sell me one of these little signs because they look so awesome, but he refused and looked at me like I was crazy

The cinnamon rolls were the size of my head. I’m not joking. Well, if my head were flat and cinnamon roll-shaped. 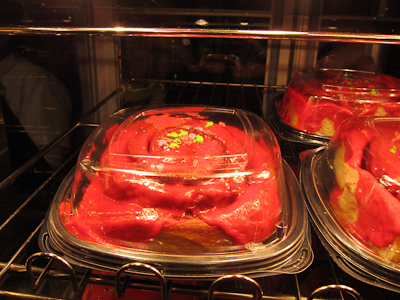 I also wanted the Blueberry Blast Drink, which had some kind of light up flashing ice cube thing in it that looked really cool, but the line was long after the show was over and I was kind of ready to go to bed.

The show itself was amazing, but I’ll cover that in my next post. Here’s a sneak peek.

It was actually quite crowded. Much more crowded than I remember the Soundsational event being.

I don’t know why. Maybe they let in more people, or just the area is different than the Fantasyland layout they used for the Soundsational event, but we were much more packed in.

I’ll be honest–I was a little disappointed. I really had hoped that with an AP-only crowd, it would be easier to get a good spot for the show without waiting too long, and I’d get a chance to ride some of the rides, but that really didn’t happen.

Well, I mean I chose not to ride the rides–I thought about the Haunted Mansion but there was a long line right after the show. I mean basically “right after the show” is the time period I’m talking about, since I’m getting old and midnight is starting to push my limit (except for One More Disney Day).

The crowd did thin out quite a bit in Adventureland after the mass exodus from the show cleared, about 12:30ish, but the Jungle Cruise, which I wanted to go on, was closed.

On my way out

All-in-all I had a good time. A bit disappointed by the crowds, but the opening of Fantasmic! was really cool, and I actually haven’t seen the show in years, so that was fun as well.

There’s a special popcorn bucket, available only on the 14th, 15th, 21st, and 22nd for Fantasmic! And guess what? I got one for you! here it is! 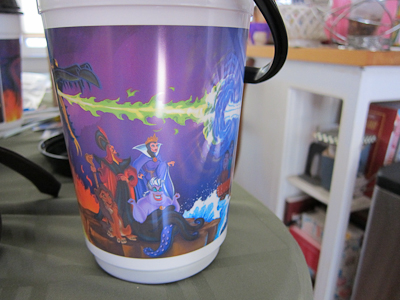 Correction–I got two for you! One I’m going to give away right now, the other I’ll give away some time next week.

You’ll have to keep checking! The easiest thing to do would be to subscribe using the link on the right, or just liking MYWTM on Facebook.

To enter, leave a comment here saying, “I! Love! Fantasmic!” Don’t forget to use a legitimate email address.