That’s right, I said Cars Land! Or should I say CARS LAND? Or how about

Yeah, that’s good. The biggest thing to happen to the Disneyland resort since the 50th is the expansion of Disney California Adventure (also known as the Mouse-Next-Door) with Cars Land and Buena Vista Street. The officially open on my birthday, Friday the 15th, and as much as I want to be there just to, you know, be there, my pass is blocked out.

Fortunately, I got into an annual passholder preview!

My ticket to fun! And my Winnie the Pooh watch!

Cars Land is very well hidden behind shrub-covered walls and just plain old construction walls. The annual passholder preview entrance was back in Pacific Wharf, and I got a quick peek when they were letting out the earlier time slot (my time slot was 1-5pm).

After  a bit of a wait, I made it past the walls, and it was seriously like being instantly transported to the desert. I know people say that whole “instant transformation” (just add water!) but really. It’s Disney, so I know you know what I’m talking about.

Traffic was controlled by dividing the main walkway into the land in half with traffic going in and out on either side. This was extremely efficient, as I was wondering how they were going to control the chaos of people getting in there.

I think the thing that struck me most about Cars Land was the sheer scale of it. These mountains are HUGE. It’s weird to have been watching the construction step by step, like from on top of Mickey’s Fun Wheel, or peeking out over the walls, or videos on Youtube, and then have it be so vastly different stepping inside there. The mountains look like the size of real mountains when you’re standing there. The scale is incredible.

The feeling of distance is amazing

The mountain range serves as the backdrop for the whole land.

There are three attractions in Cars Land: Radiator Springs Racers (the “E-ticket” combo dark ride, thrill ride, and awesomeness), Luigi’s Flying Tires (which is basically a giant air hockey table and you’re the puck, and also there’s beach balls), and Tow Mater’s Junkyard Jamboree (which is a kind of spinning ride where your little vehicle gets swung out to the side and if you don’t hang on to something, you bash your hips up at every turn, ask me how I know). I rode all three and will be covering those separately. 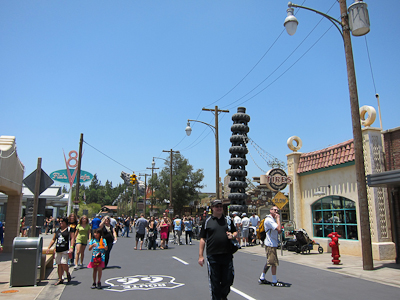 Looking down the street from Radiator Springs Racers

I also want to memorialize this picture, because it will be a very, very, VERY long time before this street is this empty:

Radiator Springs is, of course, based on the various small towns along the old Route 66. As we all know, Route 66 was largely replaced by the interstate highway system and I have driven that highway so many times I really can’t count (this is what happens when you grow up in California and then go to college and graduate school in the Midwest, kiddies). Although I never drove the length of the actual Route 66, I have seen its vestiges, which makes Radiator Springs quite nostalgic for me.

Like every other amazing Disney land, Cars Land is filled with the tiny, impeccable details that makes it so authentic.

For example, a tourist with a bright backpack taking a picture–TOTALLY authentic

Route 66 was littered with these rough-and-tumble junk shops, and Cars Land has one of its own. 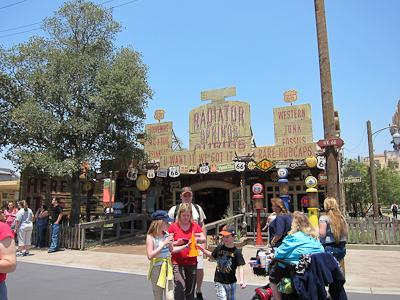 Some things are right out of the movie, like Luigi’s Casa Della Tires.

This picture doesn’t do it justice

And here’s a picture I can’t really think of anything to say about.

Looking back toward Radiator Springs Racers

There are eateries–Flo’s and the Cozy Cone. Flo’s V8 Cafe is right out of the 50s

Is that guy singing “YMCA” or something?

And the Cozy Cone Motel, which is so awesome.

The whole Cozy Cone Motel is one of my favorite parts of the Cars movie. It’s modeled after the old Wigwam motels where you can sleep in a teepee, because that’s all kinds of politically correct now. I always always always wanted to sleep in a teepee but my parents never let us. Kevin finally realized the dream a couple of years ago, staying there on his way to New Mexico, but I still haven’t done it.

Well the best part of the Cozy Cone at Cars Land is that there are five cones in the back, and each one is a food window serving a different kind of food, and all of the food comes in a cone.

I mean, how awesome is that? 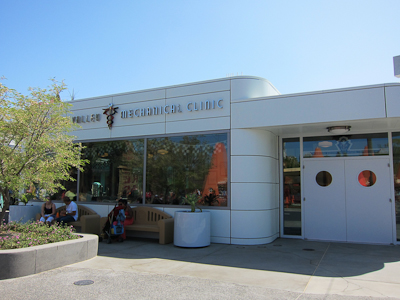 And that’s where you’ll find a bathroom.

Because I know you were totally wondering

One great thing about Cars Land is that the imagineers planned all kinds of shaded rest areas like this one:

It was awesome to have a few places where you can just sit down, cool off for a second, and do a little people watching. They really thought through everything.

And of course, there’s the obligatory meet and greet 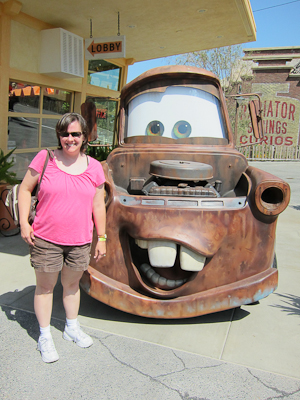 Both Mater and Lightning McQueen talk. Not necessarily TO you, but they know when you’re standing there and make comments. Mater told me I looked like I’d been through the car wash. I wasn’t quite sure how to take that.

For added authenticity, Mater and McQueen actually drive around. I mean, not fast or anything, and surrounded by a phalanx of people like Secret Service agents guarding the President’s limo, but still. They drive.

Mater on the move

And speaking of Mater, here’s his junkyard.

And here’s another picture looking down the street.

And of course, Radiator Spring’s founder

The big achievement in Cars Land is, of course, Radiator Springs Racers. I did ride it, and I took pictures of the queue, but I didn’t take pictures of the ride itself because I like to fully enjoy the experience before I do it all behind the lens. I went back to ride it again but it had broken temporarily and my feet were killing me, so you’ll have to wait on full ride pictures. I will show you these though:

Stick around for more Cars Land and Buena Vista Street!