Have you ever walked around the Disneyland Resort and thought, “Man, I wish I could party like it’s 1999”?

Yep, I’m once again referring to the Mad T Party, as you no doubt deduced from the clever title of this entry and/or have read Mad T Party (Part I) and Mad T Party House of Cards. (the House of Cards entry really should have been Mad T Party Part II, but I’m just full of contradictory continuity errors)

But what makes this part of the Mad T Party most like 1999 is the arcade.

My mother didn’t actually say that

Once upon a time, I was very good at Skee-Ball, or as it’s known in Mad T Land, Queen’s Croquet. I’m still decent at it, but in my younger days, I was a Skee-Ball champion of epic proportions.

Anyway, the Mad Arcade is where you want to go when you love the vibe of the Mad T Party but are tired of dancing, or maybe you just have a bunch of quarters weighing you down with a need to play Skee-Ball and win  nothing.

There’s also the Smile Smash, where you shoot balls at the creepy-looking Cheshire Cat

If you can’t get enough of the Lewis Carroll references, here’s a Jabberwocky game 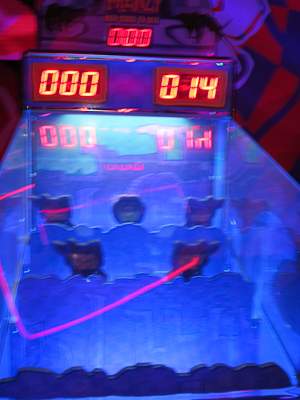 Incidentally, while I’m being snobbish, Tigger was a very minor character in the Winnie the Pooh series. In fact, he didn’t even show up until the second book. His Disney-elevated sense of importance remains a mild irritation to me.

There’s also one of those electronic jump-roping games. I once had a co-worker who was INSANELY good at these.

By this time of the night, my photography skills had started to wane. For example,

That, like, literally hurts my eyes looking at it.

Did I mention you can also play Sony Kinect?

Outside of the arcade, there are Cast Members in funny outfits

A snack and drink cart/window/thing

The Mad T Party is for you if: