Since I only spent the one day at D23, this post is going to wrap it all up, and I want to talk about the people. I have to say, Disney fans are some of the funnest, most approachable, easiest people to talk to. I mean, I think that’s a bit of a no-brainer, given that the one thing we all have in common is a love of an animated mouse, but still. D23 was all about waiting in lines, but I had no problems striking up a conversation with people around me. Particularly these two lovely ladies:

If you guys are reading this, you BETTER leave me a comment!!

There’s a lot of bonding you can do when you’re waiting in line for 3 hours together. This is Sharon and Gina and they are true Disney fanatics and tons of fun.

Also fun are the people who dress up! I actually expected more, but there were some great costumes out there. My favorite was: 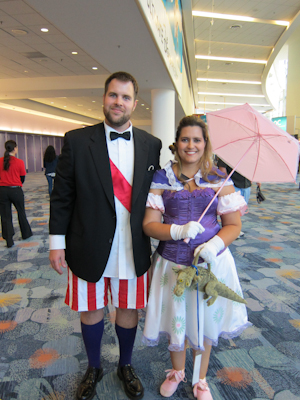 Are these walls actually stretching?

And this is Ashley–she made her own costume.

It was a gorgeous costume. She must have taken a lot of pictures on Pirates to get the details so perfectly.

Over in the Bag O’Swag, you get cards for the t-shirt contest:

I keep misreading this as "Ugly"

Without our favorite guy perched above:

This was totally cute

There were some celebrities signing items, like Jack Lindquist who I failed to get a picture of, and Belle herself, Paige O’Hara.

She was really very sweet

I have no idea who these people are, but everyone else was taking pictures so I felt like I should too.

And finally, if you were following my Facebook entries that day, I mentioned that I completely forgot to bring a pencil or pen of any kind, but when I dug around my purse I did find a set of crayons from Red Robin, in that “You know you’re a mom when…” sense. This one booth selling pens was having an ugly pen contest. I entered said blue crayon in the contest, but I didn’t win. 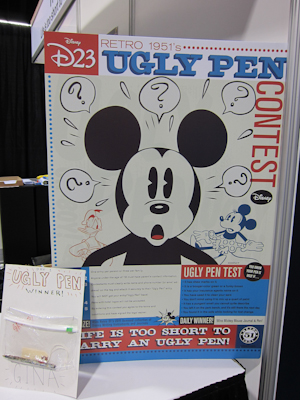 It seriously should have won

My psychic side is telling me that you’re saying one of three things:

So for you #3 people, D23 is The Official Disney Fan Club, and D23 Expo is The Ultimate Disney Fan Event! Over at the Convention Center, it’s like 60 billion miles* of Disney Disney Disney! The schedule is packed with everything from Parks and Resorts to Disney Entertainment to surprise celebrities and lots of fun stuff in between. And I’m going!

It’s actually a 3-day event starting today, but I just couldn’t swing all 3 days, so I’m going on Saturday. I’m really excited about some of the Imagineering sessions–will I find the magic there??? Probably part of it! Watch this spot for a full report. Or a partial report, whichever I get a chance to do. And be sure to Friend MYWTM on Facebook because I’ll be doing some live mini-blogging over there too!

And if you’re there, look for me! I’ll be wearing a white t-shirt with a familiar logo ;).