Hey, guess where I was on Saturday?

(hint: if you have to guess, then you need to friend MYWTM on Facebook! Or read the title of this post!)

It was very fun! But if I had to pick one word to describe my day, it would be “Lines.” Lots of people and lots and lots of lines. In fact, pretty much the only thing that didn’t have a line was the ladies restroom.

I had been warned ahead of time by my friend who attended on Friday (it was a 3-day event, I did Saturday only) to either get there really really early, or get there late. Since I’m always so bright and chipper in the morning, I chose late. The general public was allowed in at 10:00 but had lined up hours earlier. I got there at about 11:00 and only had about 50 people in front of me, so it wasn’t bad at all.

Like any convention, D23 had a number of seminars, panel discussions, and presentations. There was so much to see and do, but there was really only one panel discussion I really, REALLY wanted to see, and I just wanted to soak in everything else. That turned out to be a good plan, because the lines for the presentations and panels were 3 hours, or longer in some cases.

I told you there were a lot of lines.

I didn’t (couldn’t!) photograph everything, so I picked out some things I found cool. Like the Black Pearl–actually used for several scenes in the movie.

The "waves" it's sitting on are SO authentic!

I couldn’t resist the Cars stuff, particularly in anticipation of Cars Land at the Mouse-Next-Door (California Adventure) opening next summer. 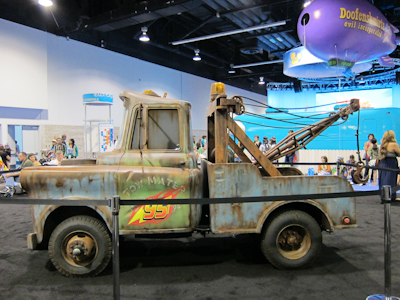 It's Mater! He never leaks oil.

The cool part about Mater was his animated eyes.

He's not as dumb as he looks.

On a side note, I know a lot of people didn’t, but I really liked Cars 2. Sure it wasn’t the emotional developed storyline that the original was, but I thought for a James Bond action-adventure type movie it was great.

There was a pin and Vinylmation trading area that I thought would be more crowded, but it wasn’t given the rest of the expo. 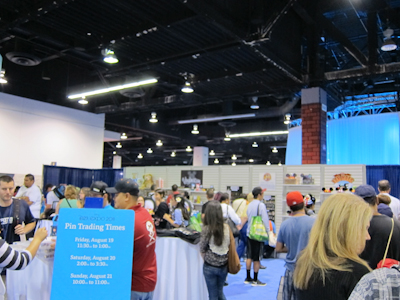 That section also had some new mouse ears being released in October. I thought these two were particularly cute.

Theo will love this one

This one is for Anderson and Annika!

Over in the “Disney Living” section, there were booths from various Disney consumer products. They had everything from Little Golden Books 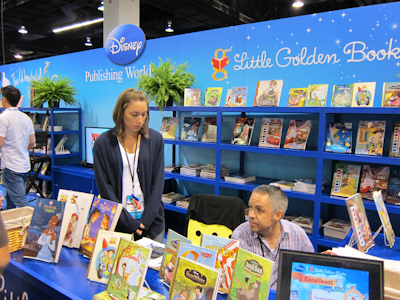 Sorry for the unflattering picture, whoever you two people are

to Winnie the Pooh art,

No joke, this guy was demonstrating making balloon structures. It looked surprisingly easy.

That was part of the “Disney Celebration” section from Hallmark, DecoPac, and Party City/AMSCAN (you’ll have to google those yourself). There were very elaborate birthday party setups you can get: 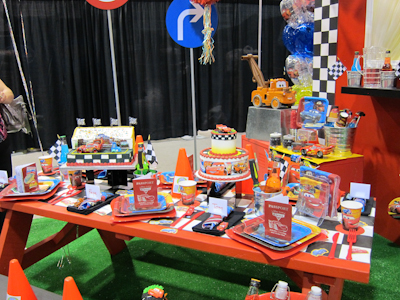 although if you were a true nerd parent, you’d throw a storybook party.

I loved seeing a demo and meet and greet with ACME artist David Willardson.

Yes, that's Mickey on the canvas

He casually painted as he spoke to us. I’m always amazed by artists because I just can’t draw or paint, let alone talk at the same time.

As he was painting, he told us he started his art career at Disneyland...as a dishwasher

There were places for the kids to play, which was probably a godsend for the parents

A number of them were themed, like Cars, princesses, and

There were even a couple of games you could play for prizes, like “bowling” 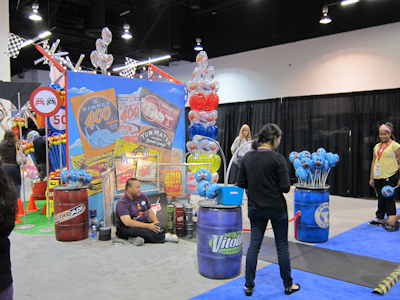 Bowling for dollars! Well, not dollars.

I played the bean bag toss, which I rather pathetically failed to win.

I got two out of three, okay?

And funny story about my t-shirt. At the last minute I thought hey, I’ll make a t-shirt that says “Ask me about My Year With The Mouse”! How hard can it be? So I went to Michaels to get those iron-on transfers, and while I was there I realized that all of the transfers were for ink jet printers, and our shiny new color printer happens to be  a fancy laser printer. So I end up calling and texting my friends to see if any had an ink jet printer I can borrow, and one of my fabulous friends did! The packaging of the transfers said to print on “the coated side” but it was entirely unclear which side was the coated side. To be safe, we printed two, one on each side of the paper. When I went to iron it on, I was certain I would pick the wrong one and stick it to my iron.

Anyway, I did get the adhesive off of the iron and successfully finish the shirt, although nobody did ask me about MYWTM. *sigh* But back to D23…

My favorite part of the Disney Living area was the Small World Village. As you know (and any new readers are about to find out),” it’s a small world” is a particular favorite of mine. They had some of the original doll costumes on display:

The attention to detail is phenomenal. Only Disney would get every thread right on a doll you see from several feet away while you float on by. They also had one of the geese on display.

I love these guys

The Small World Village had a Nordstrom’s pop-up store, selling a new line of Small World baby and kid’s clothes. They were actually super-cute, but, you know, it’s Nordstrom’s and they weren’t exactly on sale.

I also had fun at the Disney Corporate Citizenship pavilion. We all got to be honorary VoluntEARS and do a project. They had two to choose from. One was building boxes for–I don’t know, actually. I didn’t ask about it. But the program guide said it was for comfort kits for children and families in need. Each guest/group got to paint one square of wood, like this:

Did I mention I can’t paint or draw? The other project was to get a cute little pot, fill it with soil, and plant two miniscule broccoli seeds in it.

See, now THIS is something I can do!

Now I happen to not have a green thumb. I have more like the Thumb of Death. Plants wither and die just looking at me. I killed two cacti once. One I over-watered, one I under-watered. I didn’t even know it was possible to under-water a cactus until I actually did it. I mean, I couldn’t even get my Chia pet to grow. So I was a little worried about this poor broccoli plant, but I think that it spent so little time in my hands it just might possibly live. Let’s hope so. I’d hate to be the one who failed Disney Corporate Citizenship.

After you did your project, you got a free reusable shopping bag with like green stuff on it and everything. And by the way–stay tuned to MYWTM because I’m going to be doing a giveaway of a Bag O’Swag. That’s right–they give me stuff for free and I send it to you! Everyone wins! I guess!

The highlight of the day, though, was getting to meet Disneyland’s first President, Jack Lindquist. We’d just gotten his book In Service to The Mouse: My Unexpected Journey to Becoming Disneyland’s First President but I didn’t bring it along to be autographed because I thought we weren’t supposed to bring anything from home to be autographed. Instead I got to shake his hand and he signed my name badge. The super-cool thing is that he agreed to be interviewed for my little project here! Woo hoo! Stay tuned for that one too!

And that was the Show Floor of D23!